Markets buoyant ahead of Powell testimony

405
SHARES
8.7k
VIEWS
Share on FacebookShare on TwitterShare on WhatsApp

The ongoing breakout rally in the commodity sector shows few signs of stopping this morning as WTI and Brent trade at new 2021 highs. Brent oil is trading up +1.8 percent on the day, while WTI oil is close on its heels, and trades higher by around +1.6 percent on the day so far.

Metals are also getting in on the act, with the price of tin and copper trading at decade highs this morning. Gold has moved back above the $1,815 level, marking a $50.00 recovery from the lows of last week, while silver is making solid traction above the $28.00 level.

Natural gas, gasoline, and heating oil are also posting solid gains on Tuesday as the bad weather in the United States causes traders and investors to turn bullish towards the energy sector.

Hope over improving global growth as the end of lockdown over the spring and summer period is giving US futures markets a boost and helping to lift Asian markets this morning. The Nikkei 225 index is at record highs today, while the Hang Seng is trading up close to +2 percent intraday.

The S&P 500 is also trading higher and will look to break its four-day losing streak as the tech sector starts to struggle. The Nasdaq also looks to break a five-day losing run. European markets are also set to open higher, with the German DAX and the CAC 40 leading the advancers.

Antipodean currencies continue to be the star performers the foreign exchange market as the ongoing rally in the commodity sector helps to lift the Australian and New Zealand dollar to multi-year highs.

Sterling is making traction above the 1.4000 handle as traders await a raft of jobs data from the United Kingdom this morning. The euro is also benefitting from broad-based weakness in the US dollar index.

Bitcoin is trading lower by around -10 percent on the week. No major catalyst behind the sell-off, however, the crypto exchange Kraken observed major technical problems yesterday, with some big name cryptos dropping by as much as fifty percent.

During the European session, the release of UK jobs data and eurozone CPI is set to headline the economic docket. The EU CPI release is largely set to be a non-event; however, UK jobs data could be a big market mover for sterling and the FTSE 100.

The UK unemployment rate is set to increase to 5.1 percent, while UK jobless claims are predicted to increase by 35,000. Average wages are forecasted to come in slightly higher. Overall, sterling has plenty of scope to correct lower on worse-than-expected jobs data as it trades at multi-year highs, around the 1.4100 level. 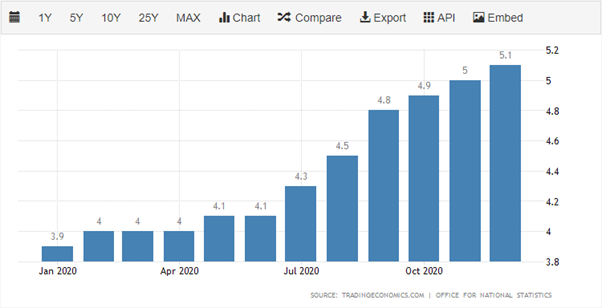 US Consumer Confidence and FED Chair Powell’s testimony headline the US trading session. Market participants will be closely listening to see Powell’s thoughts on the current situation of the US economy, and his thoughts on rising inflation and the prospect of the central bank raising rates sooner-than-expected.