424
SHARES
8.8k
VIEWS
Share on FacebookShare on TwitterShare on WhatsApp

Global equity markets tumbled during yesterday’s US trading session and US bond yields spiked amid disappointment following remarks from Fed Chair Powell, who spoke at an online WSJ event. At the time, the S&P 500 dropped below the 3800 level and into the mid-3700s, US 10-year bond yields spiked into the mid-1.50s%, the DXY surged above 91.50 and gold dropped below the $1700 level.

Equity markets have stabilised this morning, with US equity index futures having picked up modestly from yesterday’s lows (S&P 500 futures up 0.2%), but bond yields continue to advance, admittedly at a slower pace, with 10-year yields up 1.6bps to 1.566%. Higher bond yields continue to lift the US dollar, with DXY hitting 92.00 for the first time since late November. However, rangebound conditions are likely to ensue ahead of the release of the NFP (the latest US Labour Market report) as market participants opt to keep their powder dry.

Powell stuck to the usual dovish script. To summarise Powell’s remarks, on the economy; though the outlook has brightened, the US economy remains a long way from the Fed’s goals (lots of talk about how the true jobless rate remains close to 10M) and though inflation is expected to pick up as the economy reopens and due to base effects over the coming months, Powell does not think this will constitute anything more than a transitory rise in inflation given that 1) in recent years deflationary pressures have been stronger than inflationary pressures and 2) inflation expectations remain well-anchored around 2%.

On policy, given the fact that it will take the Fed a long time to reach its goals, Powell still expects rates to remain close to zero for a long-time and the Fed will only start hiking rates once it has met its dual mandate for full employment and inflation averaging moderately above 2% for a time. On QE, Powell reiterated that the Fed will not taper asset purchases until “substantial” progress has been made towards the dual mandate.

However, when pressed multiple time on how the Fed might respond/deal with “disorderly” bond market conditions, Powell refused to get drawn into talking about any specific Fed policies; he made no mention of yields curve control, weighted average maturity extension or operation “twist” and refused to talk about how the Fed might manage market functioning if the supplementary leverage ratio requirement relief that banks have been enjoying (which means banks don’t have to hold reserves on their treasury holdings) is not extended beyond March.

Given that these are topics that other Fed members have spoken on in recent days, markets seem to have expected that Powell would also speak on these matters. Not the case and the disappointment were evident in the market’s adverse reaction. Though Powell is likely holding intense discussions on these issues with his colleagues, any final decisions on these matters (i.e. how the Fed might respond to disorderly bond markets) is yet to be made – the final decision on this is likely to be made in two weeks’ time at the upcoming FOMC meeting.

Meanwhile, crude oil markets continue to surge higher in wake of yesterday’s OPEC+ meeting, with WTI now in the mid-$65.00s and eyeing break above the January 2020 high at $65.62 (meaning WTI is up over 7% in the last two sessions). Going into yesterday’s OPEC+ meeting, markets had been expecting that the cartel would agree on an output hike, but markets were proven wrong, with OPEC+ instead opting to rollover current output quotas into April. There was also chatter of rolling over the current quotas into May, but this will be decided when the group reconvenes at the start of next month. Meanwhile, and further adding to the upwards pressure on crude prices, the Saudi Arabians decided to extend their 1M barrel per day in additional output cuts into April as well (markets had been expecting them to start increasing output) and there was a lot of chatter about them only bring supply back to the market very slowly from May. 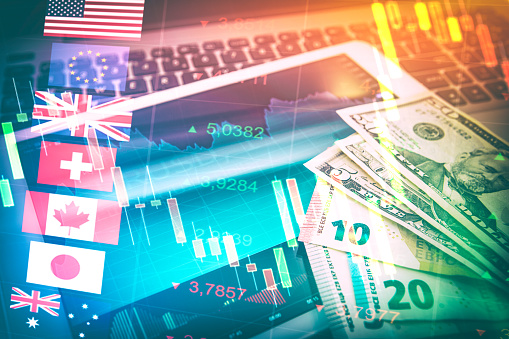 As noted, the buck is an outperformer this morning, with the DXY crossing above 92.00 at one point. Risk-sensitive AUD and NZD are two of the worst performing G10 currencies this morning, with AUDUSD breaking below the 0.7700 level and falling to the mid-0.7600s and NZDUSD dropping below 0.7150. GBP is also not holding up too well, with GBPUSD dropping below the 1.3900 level and at one point hitting 1.3800. As with the Aussie and Kiwi, sterling is suffering as a result of its greater perceived exposure to risk appetite rather than as a result of any domestic fundamental developments (of which there have been very few since the announcement of the UK budget earlier in the week).

EUR, CAD and JPY are holding up better than the above noted currencies, as CAD continues to derive support from crude oil markets. EURUSD has slipped below 1.1950, as this morning’s stronger than expected German Industrial Orders data and the fact that Eurozone inflation expectations over the next five years have risen above 1.40% for the first time since May 2019 both fail to save the euro from the dominant dollar’s advances.

USDJPY, meanwhile, continues to advance to the upside as has been the trend for most of the week and now trades to the north of the 108.00 level. At one point this morning, the pair even eclipsed 108.50, and is currently trading at its highest levels since June last year. The yen has ignored some chatter from BoJ officials overnight regarding a potential expansion of the implicit band for the bank’s 10-year Japanese government bond yield target (which currently aims to keep 10-year bond yields at pretty close to 0.0%).

The main event of the day will of course be the 1330GMT/0830EDT release of the latest US Labour Market Report (for the month of February); the median economist estimate is that the US economy added 182K jobs in February, a slightly acceleration after the economy added just 49K jobs in January, with expectations that the ongoing Covid-19 pandemic continued to undermine hiring in the second month of the year. The unemployment rate is expected to remain unchanged at 6.3% and the participation rate at 61.4%, the latter still nearly 3% above its pre-pandemic levels and the former still about 2% below. Average weekly earnings growth is expected to remain firm at above 5%, but this is more a reflection of the fact that lower wage jobs (often in hospitality, retail and tourism) continue to suffer, which has pushed up the nation wage average.

In terms of how markets might react; a stronger than expected jobs report is likely not what markets want to see right now as 1) markets want the Fed to remain easy, 2) markets want pressure to remain on Congress to act with further stimulus and 3) markets are already showing some concerns that the US economy is going to “over-heat” in the coming months/years (which might prompt an earlier than expected monetary tightening response from the Fed). Thus, if the report is stronger than expected, stocks and bonds are both likely to drop and the dollar is likely to pick up. Risk-sensitive currencies would likely underperform and commodities might also take a hit (especially precious metals).

Conversely, a much softer than expected jobs report might be met with relief as that would ease fears of the economy over-heating and keep pressure on US monetary and fiscal policy makers to keep delivering stimulus. Stocks and other risk assets (such as commodities and risk-sensitive currencies) would likely rally, as would US bond markets (meaning lower yields).

A few other data points are worth taking note of, including US and Canadian Trade numbers for the month of January, out at the same time as the Labour Market Report. BoE Monetary Policy Committee Member Haskel will be speaking at 1400GMT/0900EDT. Canadian Ivey PMI will be released at 1500GMT/1000EDT. Then the weekly US Baker Hughes Rig Count will be out at 1800GMT/1300EDT, followed by US Federal Budget data at 1900GMT/1400EDT and US Consumer Credit (for the month of January) at 2000GMT/1500EDT. Finally, FOMC member Raphael Bostic will be speaking at 2000GMT/1500EDT and is the last Fed member scheduled to speak ahead of the FOMC meeting in just under two weeks’ time.