250
SHARES
7.6k
VIEWS
Share on FacebookShare on TwitterShare on WhatsApp

The German DAX has moved to a new all-time high in early-week trading as the ongoing bullish breakout in the leading European index shows few signs of stopping above the psychological 15,000 level.

Bullish optimism has spilled over into the Ger30, following exceptionally strong ISM manufacturing and services headline numbers, and solid US monthly jobs report. The DAX has taken its cue from the S&P500 in many regards and moved into pure price discovery.

Traders and investors are betting that the outperformance in the US economy is likely to benefit German manufacturers. They are also factoring in that the world’s first and second-largest economies will be the engine of global economic growth this quarter.

A weakening of the euro currency over recent weeks has no doubt improved the prospects for heavily export reliant German companies inside the Ger30. Simply put, they need a weaker euro to remain competitive.

Furthermore, a major trading partner of the Germany, the United Kingdom, is also showing positive signs on the economic fronts. The UK is one of the largest markets in the world for German cars and manufactured goods.

With the fundamentals looking more positive outside Germany, this could certainly benefit major heavyweights inside the GER30, such as Volkswagen, BMW, Mercedes, Merc and ThyssenKrupp.

Looking at sentiment, retail traders are still in disbelief about the powerful ongoing breakout in the Ger30 and remain highly skeptical as to what is occurring in terms of positive price performance.

The ActivTrader Market sentiment tool shows that GER30 traders are very bearish, with 74 percent of market participants holding a negative bias towards the GER30. More gains in the GER30 are likely while this continues.

The four-hour time frame shows that the German DAX has reached the overall target of a large, invalidated head and shoulders pattern, which was activated last month.

According to the overall size of the invalidated pattern the German DAX could reach the 15,200 level in the short-term, meaning that a corrective move could take place at any time.

It is possible that an over extension to the upside will take, and the GER30 could test towards the psychological 15,500 resistance level. 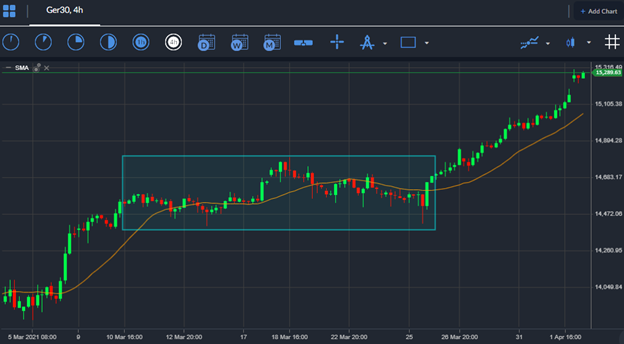 Looking at the weekly and monthly time charts, a major technical breakout has taken place on the weekly Bolling Band indicator. Price has cleared the upper Bollinger Band, which is usually extremely bullish.

Price is also testing the upper Bollinger Band on the daily time frame. A break above the 15,200 level, and the GER30 could explode to the upside and quickly head towards the 15,600 level. 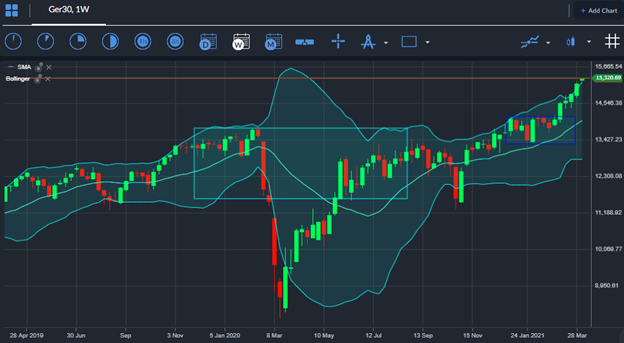