Copper Technical Analysis – Back On Top

469
SHARES
8.1k
VIEWS
Share on FacebookShare on TwitterShare on WhatsApp

Copper was the top performing metal on Monday, gaining over 4 percent, as traders and investors reacted to the decision by Chile to close its borders during the entirety of April due to a sudden spike in covid-19 cases.

Chile, the world’s top exporter of the copper, or the so-called “red metal” quickly issued a statement that it had closed its borders following a daily record of 7,830 COVID-19 infections.

Traders reacted to the news of border restrictions, which they feared could significantly disrupt mining activities by delaying equipment replacement, hence the strong bid-tone towards copper on Monday.

In terms of copper output, the South American nation is a giant in terms of the amount of copper that is being mined on a regular basis. To give some context, Chile supplies around 30 percent of global copper annually.

Chile’s copper mines produced 430,100 tonnes last month, and 457,000 tons in January. The amount of copper being mined each month is down from last year, hence why fears about supply have been heightened this year.

The outlined bullish dynamics for the red-metal, plus positive seasonal affects in April are just some of the reasons why copper is likely to stay bid during this month.

The ActivTrader Sentiment Tool shows that traders have turned more bearish since last week, with some 65 percent of traders turning negative towards copper, while 35 percent are bullish.

The heightened negative sentiment towards copper around current levels should help the continuation of the existing uptrend, and cement further gains during the course of this month, as retail traders are typically on the wrong side of existing market trends.

The four-hour time frame shows that a bullish triangle pattern breakout has taken place, following a move above the $405.00 resistance level.

According to the size of the pattern copper could rise towards the February high while the price holds above the $405.00 level.

Trendline analysis shows that the $415.00 level offers the strongest form of technical resistance for copper prices in the near-term, while $395.00 is critical support. 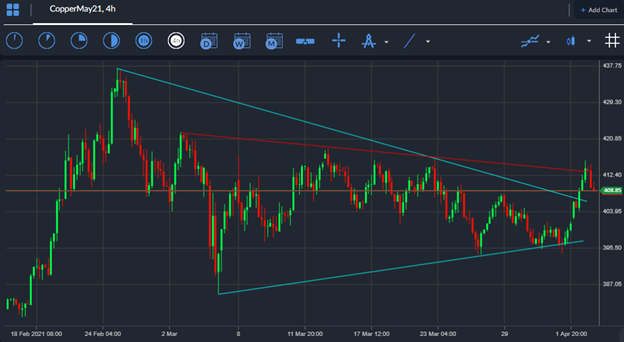 It is noteworthy that a bearish head and shoulders pattern has been invalidated on the weekly time frame, and the price of copper has reached the invalidation target, around $430.00. Therefore, gains above $430.00 should start the next major rally in copper prices

The larger picture for copper prices still shows an inverted head and shoulders pattern, which remains activated while the price trades above the $380.00 level.

According to the overall size of the bullish reversal pattern, copper prices could rise towards the $600.00 level over the medium to long-term. 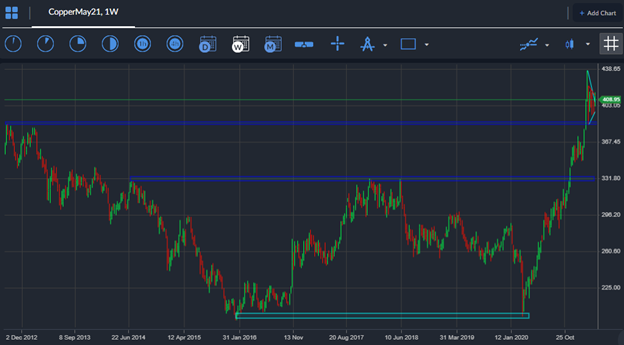