207
SHARES
7.7k
VIEWS
Share on FacebookShare on TwitterShare on WhatsApp

The British pound is starting to stabilize against the US dollar currency, following a failed technical breakout below the pivotal 1.3780 level and a break in the pairs recent two-week losing streak.

Downside momentum started to wane last week, as risk-on market sentiment helped lift the British pound currency, and the strong bullish breakout in the US dollar also started to take a breather. The GBPUSD pair has a strong correlation with the S&P 500 index at times, and often rally when the index is rising.

According to technical analysis, the GBPUSD pair’s 200-period moving average on the four-hour time frame is currently found around the 1.2890 level. This level is likely to be the major reversal or bullish breakout area this week. A bullish trend change could encourage the notion that the correction in the pair is over.

This week, the short-term bearish trend in the GBPUSD pair is likely to come in question, if bulls fully take charge above the 1.3900 level. Sterling has traded below its 200-period moving average on the four-hour time, since March 19th.

Looking at the bear side as well, a strong rejection from the 200-period moving average on the four-hour time frame could see a continuation of the recent downside move, placing the 1.3500 and 1.3300 levels into focus.

For the record, sterling is one of the top major currencies that has held above its 200-day moving average this year, while the US dollar index has been undergoing its strong bullish recovery. Sellers need to move the price towards the 1.3350 area to change the overall trend for the GBPUSD pair.

In terms of fundamentals, the release of the FOMC meeting minutes and FED Chair Powell’s scheduled speech are likely to set the tone for sterling as high-impacting UK data is in short supply this week.

According to the ActivTrader Market Sentiment tool some 54 percent of traders are bearish towards the GBUSD pair. Traders still appear to be on the fence at the moment, which could range bound trading could persist in the short-term between the 1.3780 and 1.3930 levels.

Thus traders are still likely to hold a bullish short-term view towards the GBPUSD pair while the price trades above its 200-period moving average, around the 1.3890 level.

It should be strongly noted that continued gains above this level could start a meaningful bullish reversal. Overall, expect the recent recovery to continue while bulls hold the price above the 1.3890 level. 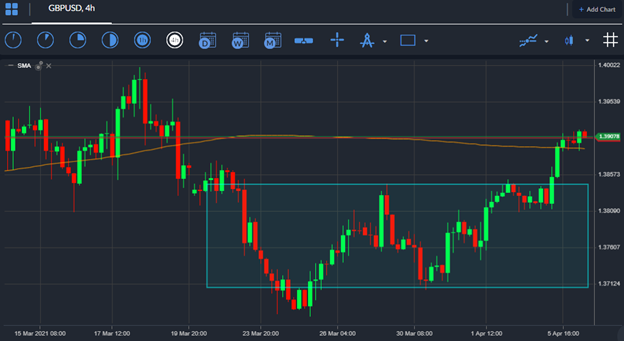 According to the daily time frame the GBPUSD pair has staged a false bearish breakout below a large descending triangle pattern, around the 1.3770 level.

Technical analysis shows that a bullish breakout from the triangle pattern will take place if bulls start to hold the price above the 1.3840 level. Key upside targets for triangle pattern are found at the 1.3930 and 1.4050 levels. 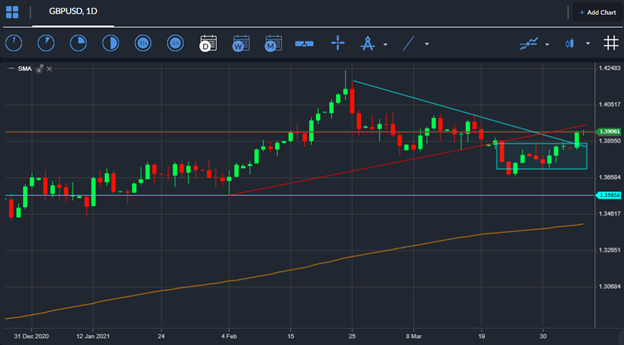