235
SHARES
8k
VIEWS
Share on FacebookShare on TwitterShare on WhatsApp

It is a new month and a new fiscal quarter, and the markets must be feeling pretty confident this morning that they have positioned themselves well, as the news of a new USA fiscal $2 Trillion stimulus package that will eventually grow to something larger with phase 2 did little to change the market composition when the details dropped.

US President Biden’s infrastructure plan will be spent over the next 8 years, (so he must be confident of having a two-term election) and will concentrate on buying and employing American goods, skills, and services to rebuild the roads, new transportation infrastructure, and get manufacturing going again. The emphasis on keeping it all in-house seems to reflect the widely criticised former administration and could create millions of jobs but at some cost.

The next 8 years for corporate America will be more expensive as was widely feared, due to the increase in corporation tax to 28%. Something that will reflect badly on the indices if overall economic growth does not compensate.

The US dollar index took a pause yesterday at $93.0 and has not traded out of that day’s range since the start of today, and the S&P500 having made a new all-time high is looking likely to remain bullish into the London session.

In the overnight Asia-Pac session the Japanese Tankan Big Manufacturing Index beat market expectations and absolutely smashed the previous months reading. Positive sentiment out of the Japanese manufacturers is exactly what you would expect with the weakening yen but also, shows that exports to China are up 37.5% year-on-year is what the manufacturers need to feel really confident. The Japanese Manufacturing PMI data was also positive printing 52.7 for March. One piece of data out last night that was disappointing came from the Chinese Caixin Manufacturing PMI which although was above the important 50 level in March had dropped below Februarys 50.9 and under the expected 51.3 coming in at 50.6. The USDJPY Monthly chart is showing that the price action is now trading into the Ichimoku cloud, where we should expect any further price rises to slow down.

Australian retail sales came in at -0.8% which is dis-inflationary but better than expected, the weakening Australian dollar will not benefit most, and the price action is looking more and more like a completed Head and Shoulders pattern now on the daily time frame, so I am expecting the 0.7400 and daily 200 exponential moving average (ema) to be tested.

The ActivTrader sentiment indicator has retail traders evenly positioned on the AUDUSD but if we do get a measured move due to the breakdown of the H&S chart pattern, we could be trading at 0.7000 sometime in H2 2021. 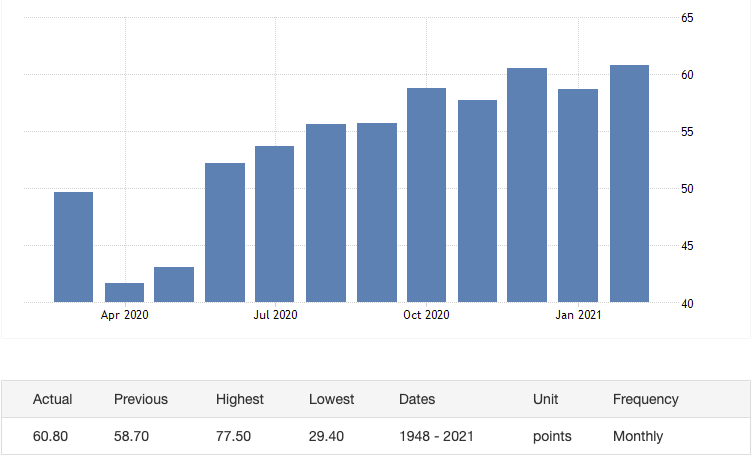 Later on today we have final readings for the Eurozone, United Kingdom and USA manufacturing PMI’s where the best readings will show a rise in input prices with the Purchasing Managers also able to pass on those higher prices in the output prices. We also have the important ISM Manufacturing number. The ISM Manufacturing PMI data has been above 50 for the last 12 months and in February had a greater improvement jumping to 60.8 showing factory activity is doing really well in these trying times.