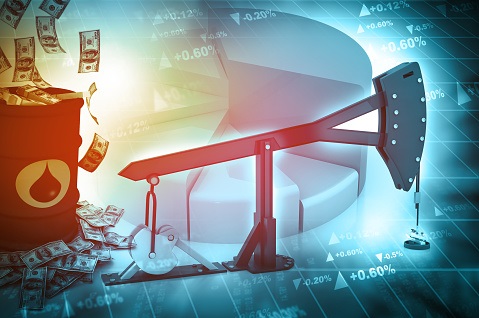 337
SHARES
8.5k
VIEWS
Share on FacebookShare on TwitterShare on WhatsApp 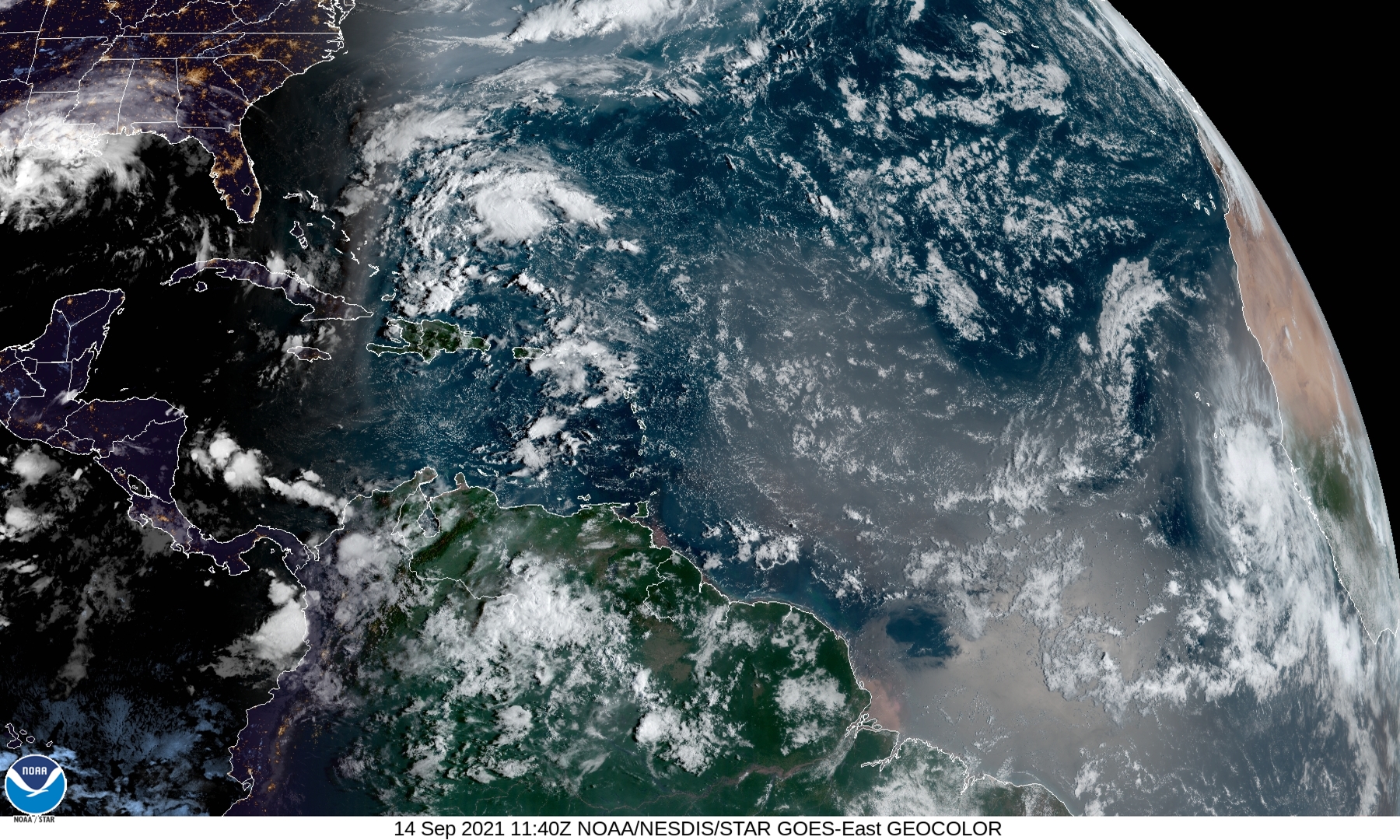 It’s hurricane season and the USA is being battered by weather systems which have already caused multi billion dollars’ worth of damage. The annual tropical cyclone season in the northern hemisphere began in May but usually starts on June 1. It will likely end on November 30, 2021 but started earlier due to the named weather systems that had already started in the Atlantic. They generally start on the West coast of Africa and travel west towards the Gulf of Mexico, Florida, and Caribbean before travelling north towards New York. At the end of August hurricane Ida ripped through the Gulf of Mexico shutting down offshore oil and gas rigs and on land refiners.

To mitigate the disruption caused by these shutdowns, the USA has a Strategic Petroleum Reserve (SPR) which can be used during times of disruption. On the 2nd of September ExxonMobil went to the SPR and requested up to 1.5 million barrels of crude oil. “Our main focus has been to restore fuel production to supply gasoline and diesel needed in the local Louisiana market, and the SPR release is an important step in achieving that goal.” ExxonMobil wrote on their website.

The crude inventory report from the Energy Information Agency (EIA) showed that in the prior week to September 3rd there had been a crude oil draw of 1.5 million barrels from the SPR and that the reserves stood at 423.9 million barrels which is down about 6% below the 5-year average. By the 6th of September 80% of oil output in the Gulf of Mexico was still offline and it will take months to work out the true cost of the damage caused to the oil industry and residents within the hurricanes path when it made landfall.

The severity of the weather systems in 2021 have not reached hurricane Katrina levels that occurred in 2005 but the worry is that climate change is making the frequency of the storms worse along with their potential destructive power. 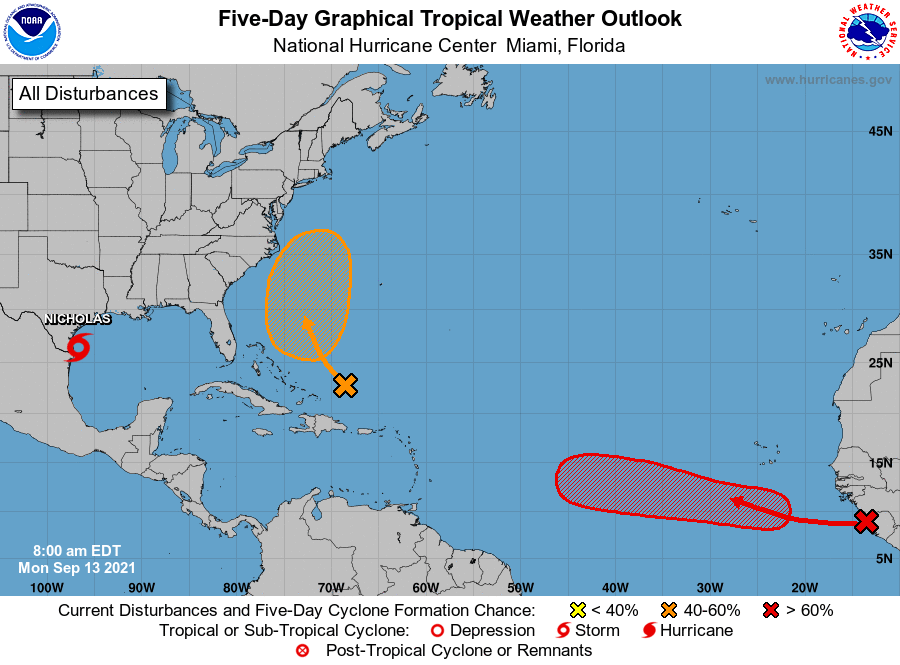 It’s not just oil traders that keep an eye on these weather systems that arrive, as the destructive force of a hurricane that makes landfall can destroy infrastructure and crops. Insurance companies will be keen to track a hurricane just as much as an orange juice or wheat futures trader. The laws of supply and demand will describe how the future price of orange juice is likely to appreciate as entire crops in Florida get wiped out, with prices adjusting as traders track the latest weather system from Africa like the one above.

Similarly, the price of oil will spike when demand is high, but supply gets cut abruptly. What we are currently seeing in the price of Brent crude is a steady rise which suggests that the current reserves can meet all the demand. 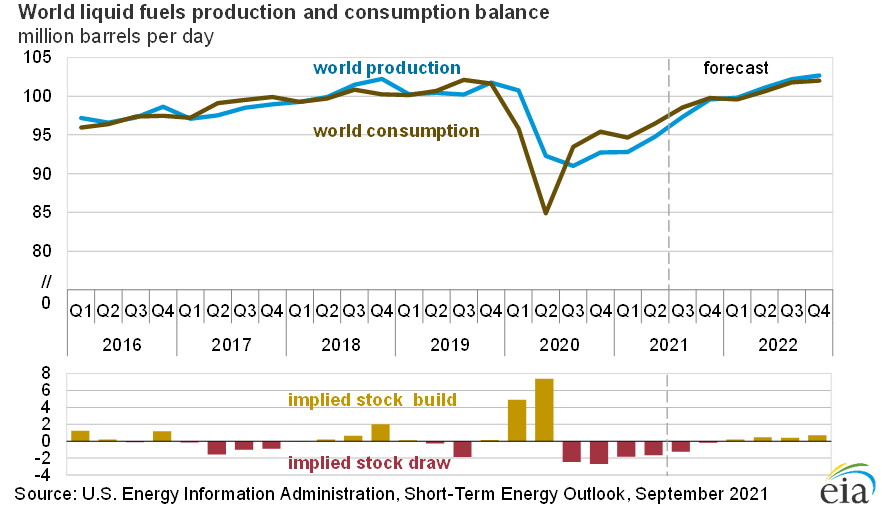 The September EIA report shows that current consumption is forecasted to be above the amount of world production, so prices are likely to be supported at these levels for now. Each week we receive more detail on how well these projections are performing versus real world high frequency analysis. 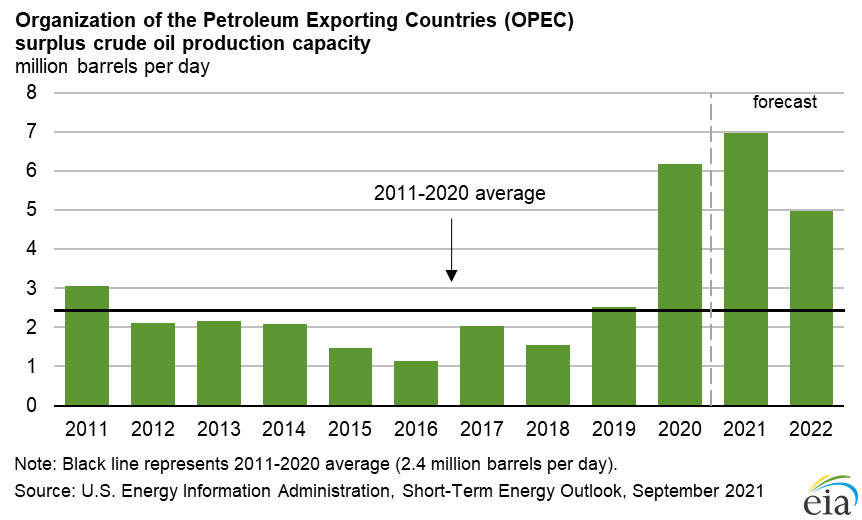 The report also shows how much spare oil production capacity the OPEC countries have, meaning there is always a way to fill a shortfall if really needed. Just as the Canadian oil producers could turn the tap up if the US found itself severely impaired for current unknown circumstances.

The current view of traders on the ActivTrader platform is that there will be a shortfall in supply with current levels of demand warranting higher prices. They are currently long the Brent contract by 66% to 33% short. Recently the President of Lukoil said that OPEC+ are happy with crude prices trading within the $75 to $65 trading range meaning that the price of crude is getting close to the top end of the consensus price range. 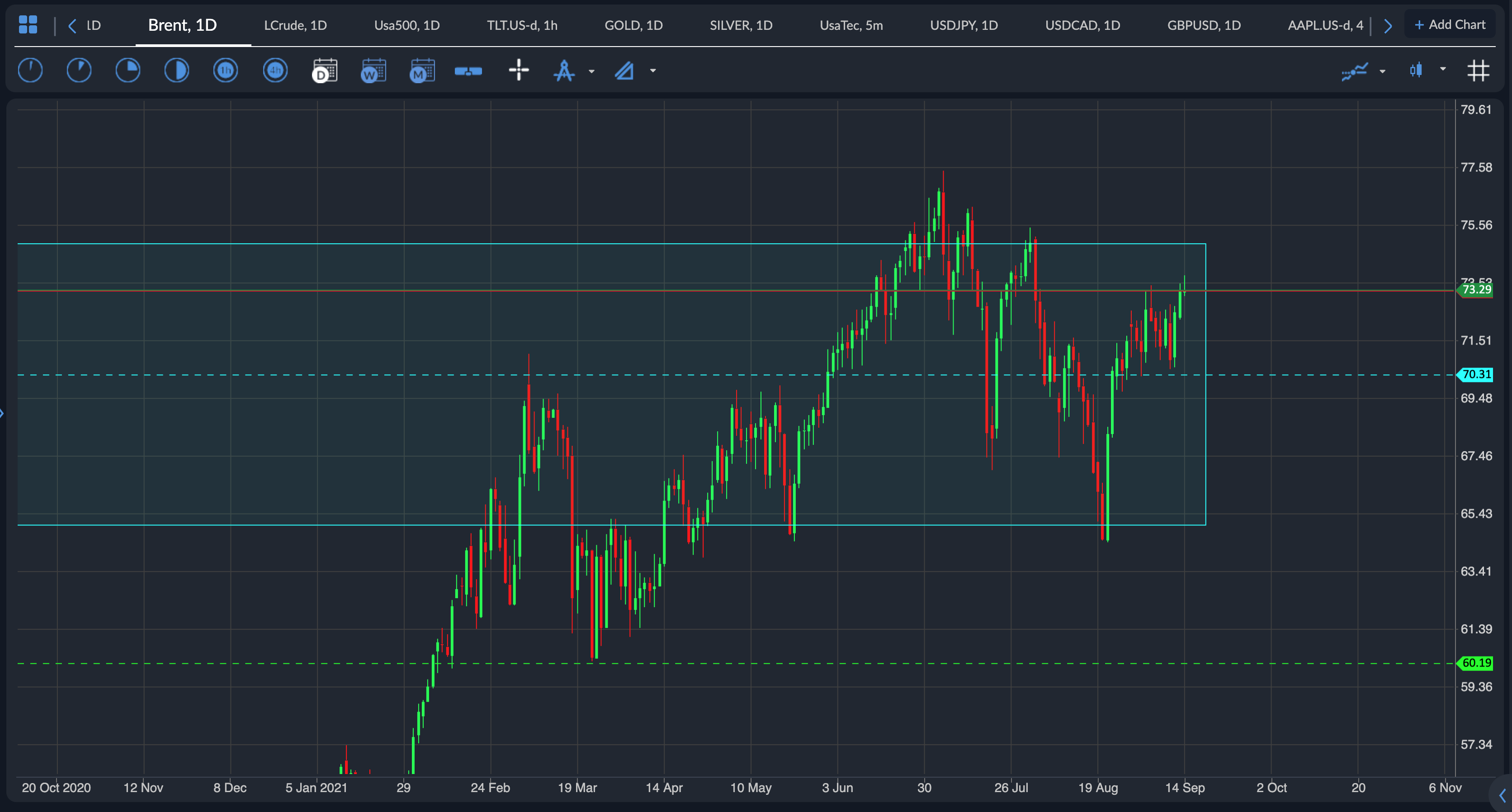 Brent crude oil spot prices averaged $71 per barrel in August and during the first week of September the price is almost at the top of the August price range. Brent prices have risen over the past year as result of steady draws on global oil inventories, which averaged 1.8 million barrels per day during the first half of 2021. With OPEC+ continuing to increase supply the price of oil is likely to decline if there is not a continued rise in consumption.

Currently the infection rate of the Delta variant is rising in certain areas but overall, the weekly change across the globe is down -11%. The northern hemisphere is coming into the traditional flu season so there is a high probability of another spike in infections if the booster jabs don’t get administered quick enough for those that need them the most. Whether that possible rising infection rate leads to lockdowns is yet to be seen but any major European lockdown will be negative for the price of Brent. 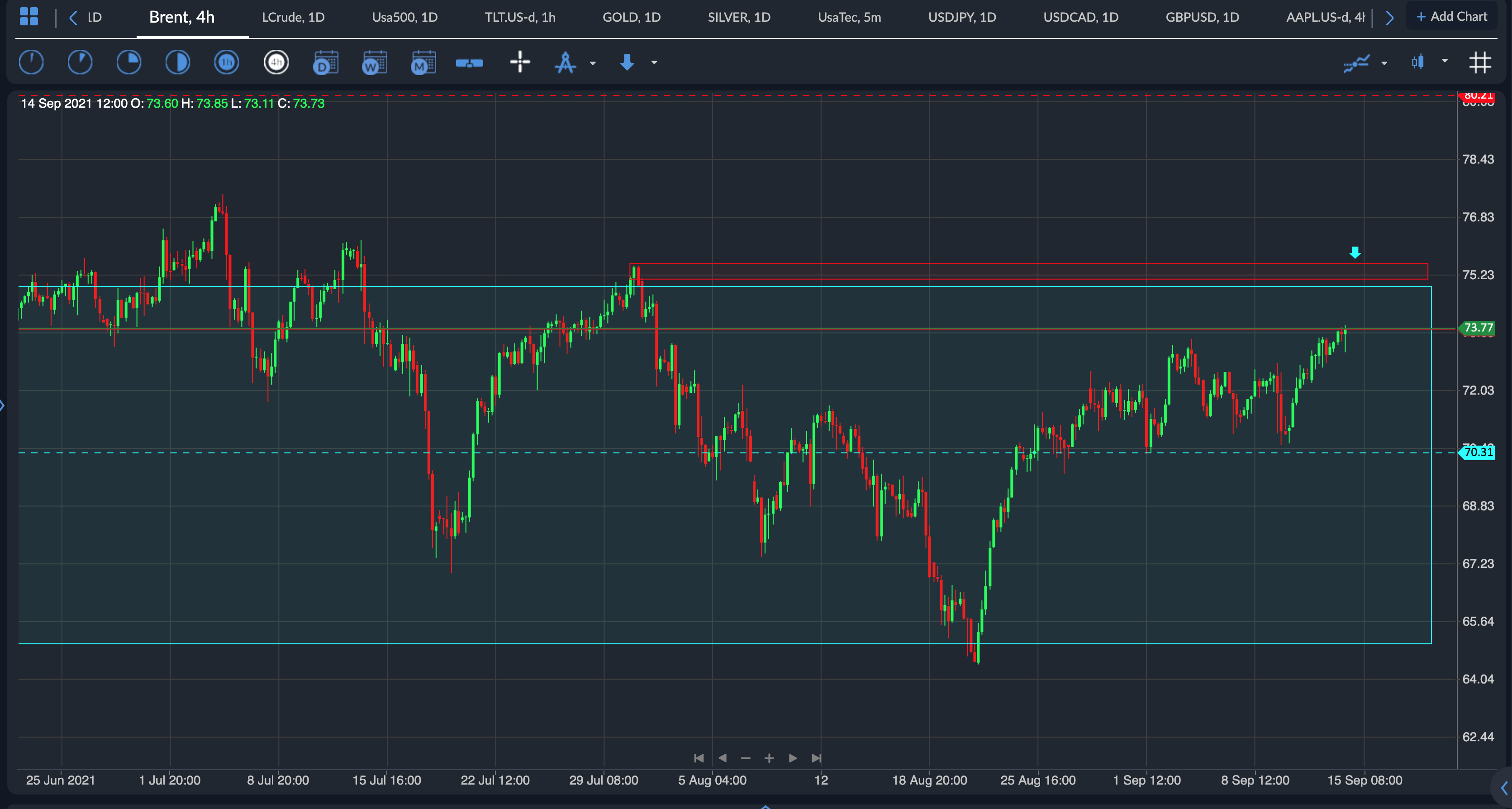 As things stand there is a real balance between the possible demand disruptions from the covid delta variant disruptions along with supply constraints whether that be by design or through natural occurrences. Economic activity indicators are showing the problems are hampering manufacturing as well as services, and the USA is going to having supply disruptions because of the hurricane season. The SPR has ample supplies to get through the next month or so and Canada or OPEC+ could increase supply if needed. For my personal trade I am going to assume the price is going to stay with the range $65 – $75, so will be looking for a short at the test of the swing high from the end of July. With a price target at the mean of the range around $70 per barrel.

The dollar drops as US inflation data slips under expectations 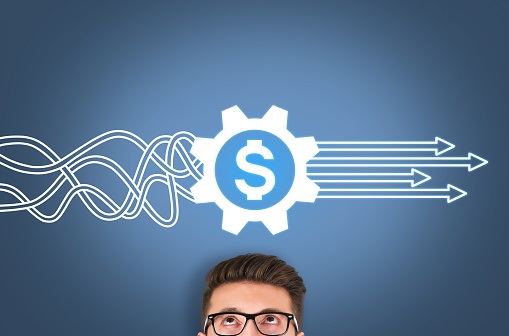 The dollar drops as US inflation data slips under expectations