Greenback slips ahead of Yellen testimony

288
SHARES
6.5k
VIEWS
Share on FacebookShare on TwitterShare on WhatsApp

Yellen is set to testify later today before Congress and has already said “Right now, with interest rates at historic lows, the smartest thing we can do is act big. In the long run, I believe the benefits will far outweigh the costs”.

Yellen will also touch upon the Biden administrations foreign exchange policy. Initial indication suggest that she will reaffirm the United States commitment to a market-determined level for the US dollar currency.

The initial market reaction to Yellen’s stance has been to sell the US dollar, with traders moving into riskier currencies, and selling the Japanese yen currency. In fact, the biggest market movers in the foreign exchange market this morning have been yen crosses.

With risk sentiment riding high the natural reaction has been a flight into antipodean currencies. The Aussie and the Kiwi are currently the top performing currencies against the US dollar and the yen this morning.

The euro and British pound have also started to edge higher against the greenback. Sterling may be receiving a boost from news that the so-called “Big Mac” index has stated that the British pound is currently 22 percent undervalued against the US dollar.

Looking at the euro currency, the recent fears about Italy have been swept aside for now. Italian and German bond yields have stopped widening. With the ECB meeting coming this Thursday, euro and bond traders may wait until the meeting is over before fully committing themselves to a market position.

Another big story this morning is the Hang Seng. The leading Hong Kong index has staged a major rally towards the 30,000 level, posting intraday gains of over 2 percent. The rise is reportedly being driven by inflows from mainland China, and risk-on market sentiment.

The Nikkei 225 is also on the rise today, although no new all-time high for the leading Japanese index. Reports this morning suggest that the Bank of Japan may outline plans to make it easier for the central bank to buy bonds during this week’s meeting.

US futures are also on the up, following a market holiday in the United States on Monday. Once again, futures appear to be reacting positively to the Yellen news, and the overall improvement in market sentiment.

Aside from Yellen’s testimony and Biden’s inauguration, the big risk events for US stock markets will be US earnings season and Friday’s preliminary US Manufacturing PMI. The US 10-Year yield is also worth watching this week to gauge the bond markets reaction to this week’s headline events. 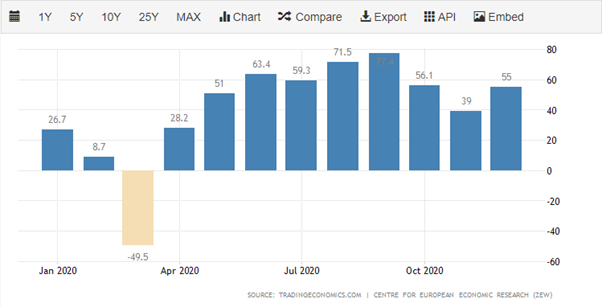 Looking ahead to the European trading season, the release of the German ZEW survey will be the main event for EU stocks and the euro currency. The ZEW survey is important as it lays how investors feel about the German economy.

The German DAX, ITA40, and CAC40 have risen in early trading, largely boosted by the positive Asian session. The UK100 is on the rise and attempting to break above a falling price channel and reclaim the 7,000 level.