406
SHARES
9.4k
VIEWS
Share on FacebookShare on TwitterShare on WhatsApp

The British pound is starting to recover above the 1.3600 level against the US dollar currency as interest rate increase expectations rise for the Bank of England, while they are pushed back by the Federal Reserve after the recent soft Non-Farm payrolls job report.

Over the weekend, Bank of England member Michael hinted at the potential for a hike in December. Saunder said “Markets have priced in over the last few months an earlier rise in Bank rate than previously and I think that’s appropriate”.

The Bank of England voting member added “The February one is fully priced in and for December, it’s half priced in. I’m not trying to give a commentary on exactly which one, but I think it is appropriate that the markets have moved to pricing a significantly earlier path of tightening”.

Sterling has reacted according and has started to find strength above the 1.3600 level as markets scramble for price in the December rate hike as inflation in the UK skyrockets due to supply chain shocks and the ongoing energy crisis.

On the technical front, the 1.3650 level is the main area sterling traders are watching in the short-term. This was the area that sterling started to breakdown last month. It marks the bottom of a triangle, and once it broke in September, sterling collapsed towards the 1.3450 mark.

Should we see bulls starting to firm above this area then a real possibility exists for a big push towards the top of the triangle around the 1.3850 area. Watch out for the 1.3650 level to define the weekly price path for sterling.

According to the ActivTrader Market Sentiment tool shows that some 58 percent of traders remain bullish towards the GBPUSD pair right now. With no large sentiment skews in play it is hard to decipher much from traders current positioning.

Looking at the four-hour time frame, the GBPUSD pair looks like it could be forming a massive, inverted head and shoulders pattern, although the pattern is still in the tentative stages and has yet to be confirmed.

The GBPUSD pair needs to reach the 1.3950 area to actually confirm the structure of this pattern, which would hold a massive 500 points of upside potential and take the pair towards the 1.4400 mark. 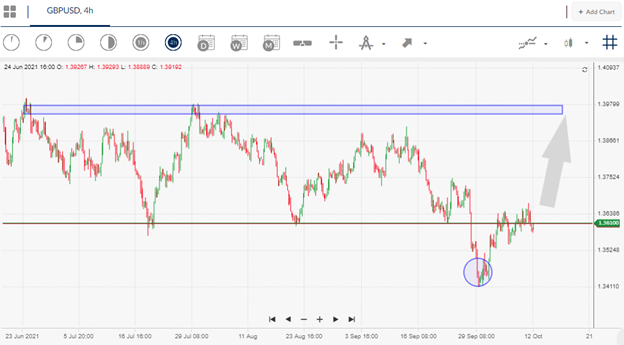 According to the daily time frame a massive, inverted head and shoulders pattern continues to play out, with the latest price pullback a final technical test of this important price pattern.

Failure for GBPUSD bulls to defend the 1.3510 level this week would be simply disastrous for the GBPUSD pair. A loss of the area could spark a test of the 1.3380 level, while a rebound keeps long-term bullish view intact. 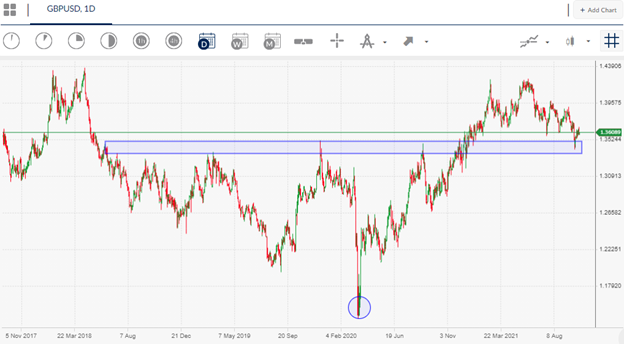