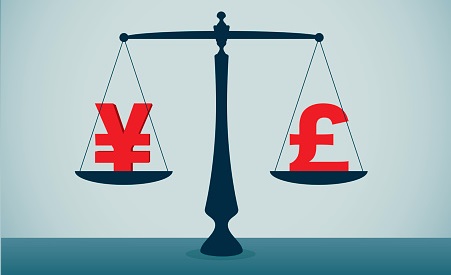 468
SHARES
13.3k
VIEWS
Share on FacebookShare on TwitterShare on WhatsApp

The GBPJPY rallied by +1.30% early Tuesday morning on better than expected UK employment data. The employment rate increased to 83K from a forecast of 5k backing up the BoE’s latest hawkish bias. The BoE is expected to hike rates by 25bps at the next policy meeting attracting traders to buy the dip.

UK Claimant Count Change for April dropped to -56.9K from the forecasted -42.5K. The unemployment rate fell to 3.7% compared to the 3.8% forecasted, favouring GBPJPY bulls.

The BoJ’s neutral stance on monetary policy continues to give GBPJPY buyers some optimism. The recent headlines from china about easing the lockdown measures renewed risk appetite on the market.

Traders shift their focus to Japan’s preliminary GDP data for the first quarter, Wednesday morning. The Japanese economy is forecasted to have shrunk from 1.1% growth to -0.4% in the first quarter. BoE MPC member Cunliffe will be speaking later in the New York session.

The GBPJPY has been on a corrective pattern from a 2-month low at 155.68 to the 159.00 previous support turned resistance. The daily chart shows a head and shoulder pattern as indicated on the diagram, a bearish pattern and hold of that area may reinforce the outlook in the near term.

However, the retracement to the upside is strongly bullish as the pair bounces back from an extremely bearish outlook. The stochastic oscillator indicates that the pair has slightly moved away from the oversold area and the current rally may be sustained in the near term. Therefore, if bulls fail to challenge the 159.000 may renew bearish interests toward the 151.00, a 2022 low.

The ActivTrader sentiment tool shows that 65% of retail traders are currently bearish on the GBPJPY. The European session pump on the pair may see a majority of the sellers exiting their position as the pound recovers ahead of Thursday’s UK inflation data. A critical area to watch out for are the 161.25 and 162.500 barriers.

The GBPJPY H4 chart shows a descending channel indicating selling pressure on the pair in the near term. The bullish momentum is currently capped by an upper trendline at 161.25 and a failure to break above that area may see the pair resuming to the downside. The 50-day moving average reinforces a bearish outlook in the near term.

The RSI indicator shows that the 3-day rally is about to reach exhaustion. The RSI indicator is approaching the 70% region which marks an overbought area and traders should expect sharp reversals from the 161.25 resistance.

AUDUSD – Rebounce from a 22-months low on Hawkish RBA minutes

Midday Brief – Risk on ahead of US inflation data

Midday Brief - Risk on ahead of US inflation data