247
SHARES
8k
VIEWS
Share on FacebookShare on TwitterShare on WhatsApp

The euro currency is still treading water against the British pound above the 0.8600 level, as the pair finished last week in the negative territory for the first time in four weeks.

Volatility surrounding the EURGBP is starting to drop as the pair is trapped in an increasingly narrow trading range. The EURGBP pair’s Average True Range is now at its lowest level since July 2019.

In terms of the short-term technicals the EURGBP pair remains trapped below its 200-period moving average on both the four and daily time frames. This means that the EURGBP pair is still technically bearish over the short and medium-term.

One of the reasons why the EURGBP pair is relatively strong this week is because the United Kingdom has reportedly had a spike in COVID-19 cases, which could lead to a third UK lockdown.

Looking ahead, the ECB meeting could be the much need catalysts for a strong directional move in the EURGBP pair. Given that the overall market trend is bearish, more losses in the EURGBP pair seems more likely than not at this stage.

It should be noted that a dovish tone from the European Central Bank this week could push the EURGBP pair into a lower trading range. A bearish head and shoulders pattern is warning that the EURGBP could be about to sink towards the 0.8500 level.

In terms of market sentiment, the ActivTrader market sentiment tool is showing that traders are 74 percent positive towards the EURGBP pair at this moment in time. This is a strong one-way trading bias, and due to the fact that retail traders are often wrong, it does suggest that the overall down trend is likely to continue.

The four-hour time frame shows that a bearish head and shoulders pattern continues to loom over the EURGBP pair. Sellers need a confirmed breakout under the 0.8580 level to activate the pattern.

Looking at the overall size of the pattern the EURGBP pair could fall towards the 0.8480 level. A move above the 0.8680 level is currently needed to invalidate the head and shoulders pattern. 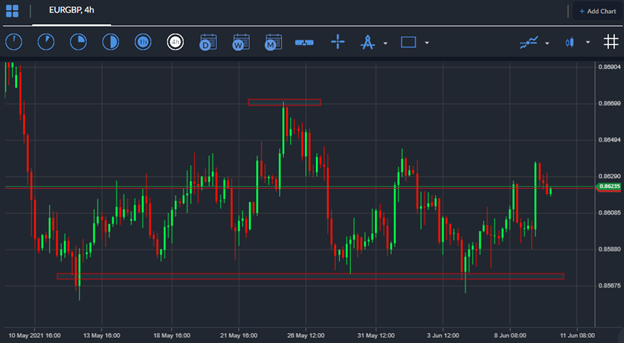 The daily time frame shows that the EURGBP pair is still trapped inside a massive broadening wedge pattern between the 0.8000 and 0.9500 level. A bearish bias is in place as the pair trades below its 200-day moving average, around the 0.8850 level. 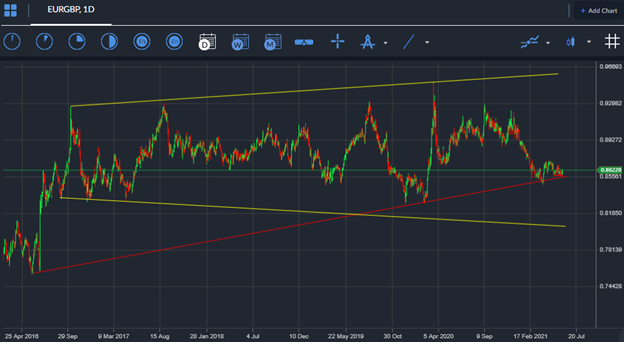 Gold pulls back from recent high, now in consolidation mode?