416
SHARES
9.2k
VIEWS
Share on FacebookShare on TwitterShare on WhatsApp

Crude oil is approaching levels not seen since October 2018, and is quickly making gains above the $69.00 level. The EIA’s STEO report also suggested a drawdown of global oil inventories could be on the cards during the summer.

Furthermore, the latest upside move in crude oil was supported by signs from US and Iranian oil talks are stalling, which means that a delay in bringing back sanctioned Iranian barrels back to the market is more likely than not.

It is also noteworthy that the American Petroleum Institute released a report that estimated a 2.1 million barrel draw in United States crude oil inventories earlier this week, which further underpinned the bullish sentiment towards oil.

Given the strong forecast by the EIA in June, and declining global oil inventories, a clear picture is being built of a recovering global economy. The bullish economic backdrop hints that during the upcoming July OPEC meeting we could see an easing of production cuts.

On the technical front, the Relative Strength Indictor is approaching overbought conditions on multiple time frames, which is providing a warning sign that a pullback could be forthcoming in the near-term. The RSI indicator is testing towards above 70 on the weekly time frame, which is means crude oil is now overbought.

Market sentiment towards WTI oil remains bullish, with some 60 percent of traders holding a positive outlook. This one-way sentiment skew is mildly bearish, and it could suggest that crude oil could correct at any time.

The four-hour time frame shows that WTI oil has broken above the neckline of a huge, inverted head and shoulders pattern, that is pointing to a coming rally towards $80.00.

As long as the price of WTI oil holds above the $68.00 level then the bullish pattern remains activated. Any pullback towards the neckline of the pattern will likely be seen as a buying opportunity. 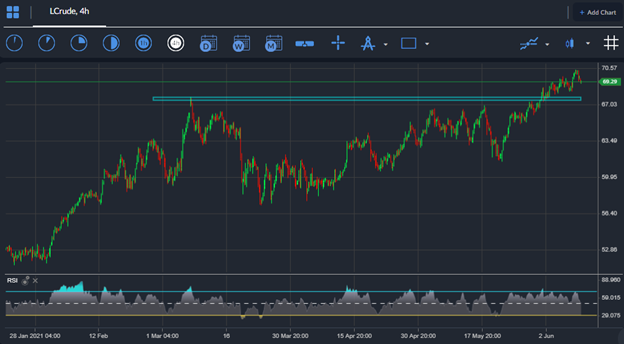 Looking at the daily time frame WTI oil is testing towards a twenty-month trading high, with the $76.60 level the next major upside resistance level to watch now that the $70.00 level has been broken.

Traders should be aware that WTI oil has relatively limited technical resistance until the $90.00 level if bulls can overcome the $76.60 level over the coming days and weeks. The only warning sign is the RSI indicator, which is overbought on the daily and weekly time frames. 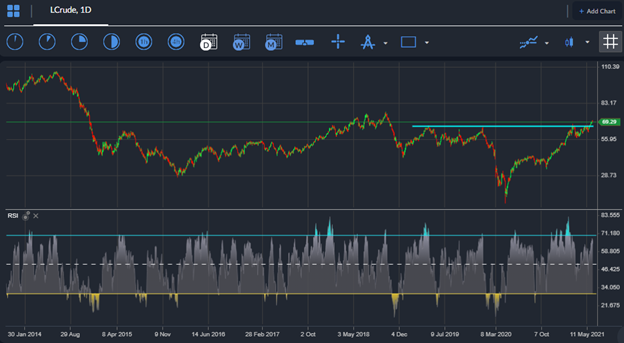 Choppy trading for GBPUSD on comments from BOE Haldane

Gold pulls back from recent high, now in consolidation mode?