by Neville Hornsey
in Stocks, World
0 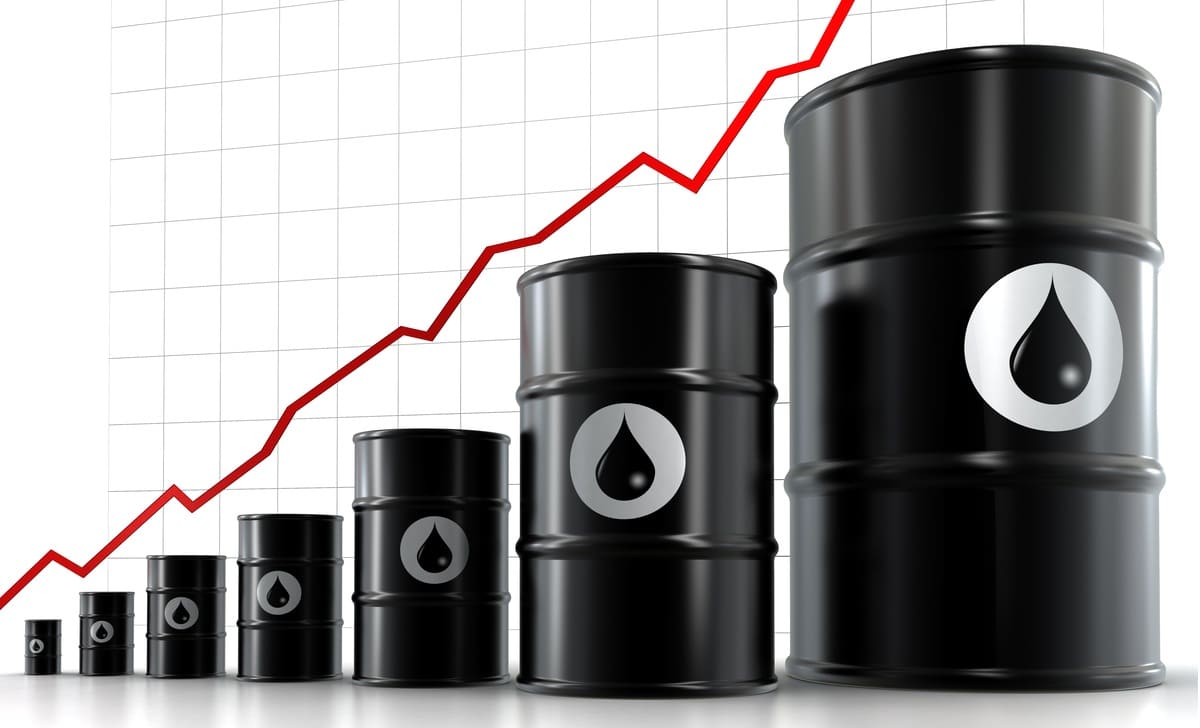 433
SHARES
13k
VIEWS
Share on FacebookShare on TwitterShare on WhatsApp

There is a risk-off sentiment wave pushing the riskier assets like equities, lower. But looking to the top right-hand corner of the above heat map, there is proof that not every stock falls when the rug is pulled from underneath the market. This was the end of trading last week and after a major move we can expect one of two things. A follow through or profit taking.

The oasis of green, in a sea of red, last Friday was the energy sector.

But even that sector has succumbed to the follow through in the downtrend today.

The central banks have been desperately trying to work out how to get inflation to slow down, and under each metric of measurement, energy and food are the greatest drivers of the recent CPI increases. Even when you take out those two volatile sectors, energy cost permeates everywhere, so until there is an abundance of supply or a diminished demand, we are going to have higher inflationary pressure for longer. Sentiment also plays a massive role in moving the market and we have had a plethora of different snippets today. Today’s fall in the energy sector could be due to the uncertainties around the Russian supply. Within the EU embargo talks, Hungary is still opposed to the measures. This morning we learned that the Saudi’s had dropped their June Official Selling Prices (OSP) for Europe and Asia, which was something of a change in trend. There is also the news that hedge funds are buying the US energy sector at the largest levels since March 2020. Could this be the turn we have been waiting for?

ConocoPhillips (COP) was one of the top performers on Friday, ending the day 4.70% higher. ConocoPhillips specializes in the exploration, production, transportation, and marketing of crude oil, bitumen, natural gas, natural gas liquids, and liquefied natural gas across the globe. Isaac Elder Blake established Continental Oil and Transportation Co. in 1875. It wasn’t long before Standard Oil had taken over the company, and after so many years the most recent acquisition was Concho Resources, which expanded the company’s presence in the world’s largest oil field. 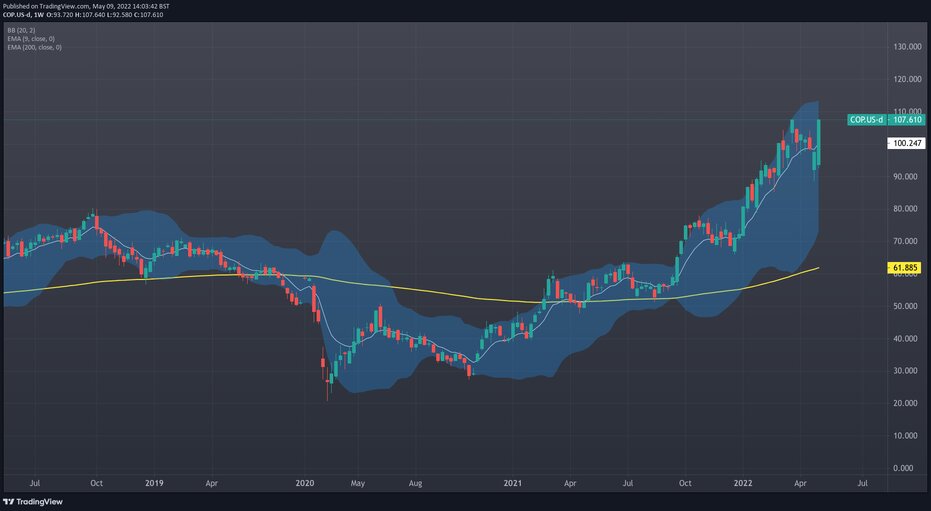 Last week’s candle as seen on the chart above closed at the highs and shows good momentum into this week ahead of the opening bell. The reason for the big spike higher after a relatively short-lived retracement was the Q1 earnings report that dropped on May 5th, 2022. Q1 earnings rose from $1.0 billion in 2021 to $5.8 billion in 2022. Taking EPS to $3.27 from $0.69 a year before. Their forward guidance also reveals that they expect a further $2 billion increase in expected 2022 returns of capital to $10 billion. Which I think is safe to say is a massive jump in a year in profitability and returns.

The company announced a quarterly ordinary dividend of 46 cents per share, payable June 1, 2022, to stockholders of record at the close of business on May 17, 2022. This boost in dividends is probably going to keep rising as US President Biden leads a swathe of countries from around the world away from Russian oil. Making companies like ConocoPhillips direct beneficiaries. 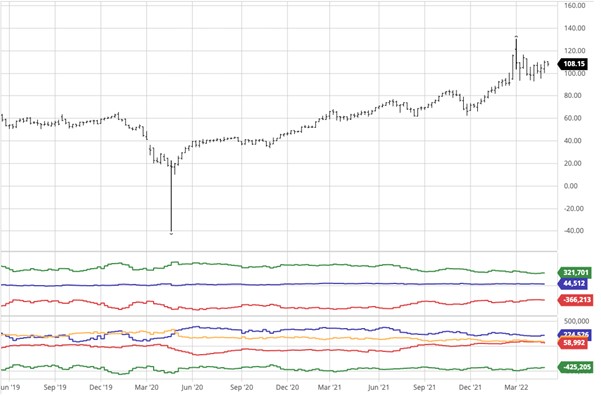 Oil producers in the US have been under real pressure to keep producing more as higher prices persist. The OPEC+ meeting this week will no doubt follow the plan to increase production by 400k BPD, although some countries will not meet their quotas.

While prices are higher, US commercials are going to keep capitalising and we’ll see companies in the energy sector with great quarterly earnings all year. The COT chart is showing that the commercials have not added to their short position by much, which indicates that they still have a reason to believe the prices will remain high or could go higher. Otherwise, their hedges would be needed to lock in the higher prices, and we are just not seeing that. 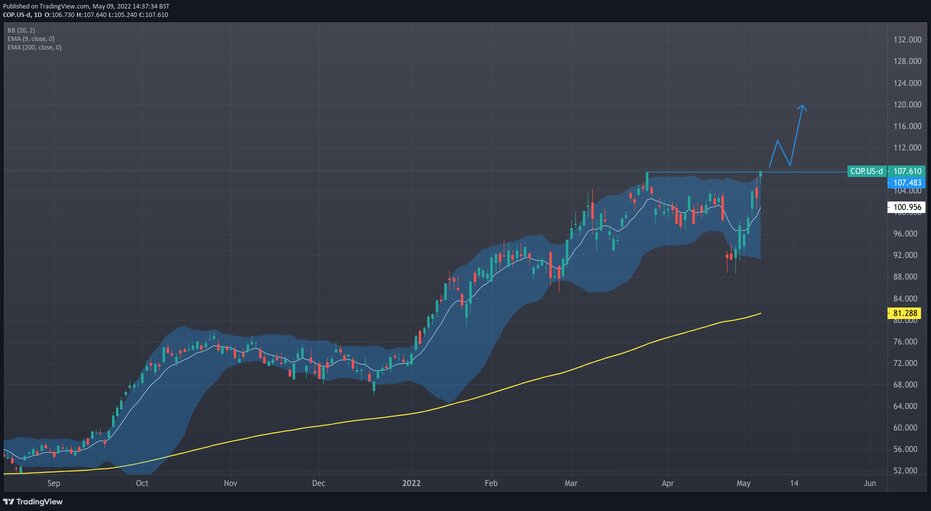 The end of day strategy would have had followers join in on the bull trend at the close on 28th of April 2022. As this article comes after the better entry, the next idea would be to wait for a break higher, retest of the breakout level $107.610 before looking to continue higher. The idea here is to buy higher and sell higher, which a lot of retail traders won’t do. They will try and pick the top. But when you see weekly performances that are above 10% as well as monthly and yearly performances all in double digits. Trading with the trend is the easiest trade to take. Not only that, but price action over the last 6 weeks has been sideways, so a lot of potential energy has built up. If we had seen a rush into the earnings and then a big sell-off I would be looking for lower prices and to get a better risk to reward. Possibly down by the daily 200 EMA. Today’s news sentiment may still bring the share price down, as there will be profit taking at some point and uncertainty within the market is an ideal time to take profits and try and keep the meat of the move.

With a potential for a break, retest, and continuation trade to form over the coming days, we’ll be then able to place a stop under the daily swing low that forms. If we get a larger sell-off, if it doesn’t remove the swing low from 25th of April 2022, I’ll be looking for buy the dip opportunities. 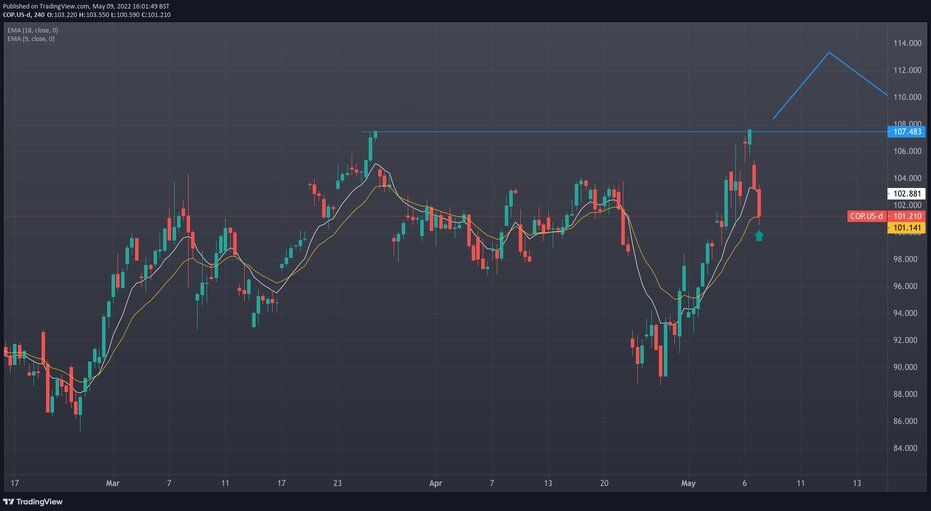 That trade idea of buying the dip would occur after a pullback into the moving averages, just as we see here on the H4. A rejection of the 18-period EMA (yellow) and a close above the 9-period EMA would be the buy trigger. Stop loss would be under the nearest swing low and the take profit would be at 1:2 Risk Reward Ratio. 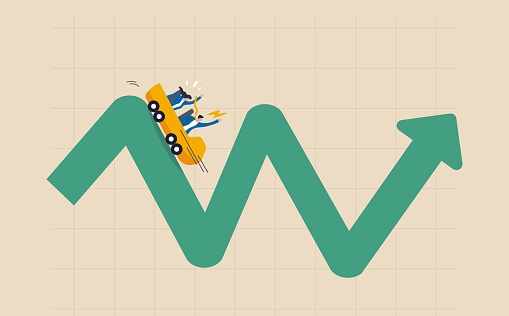