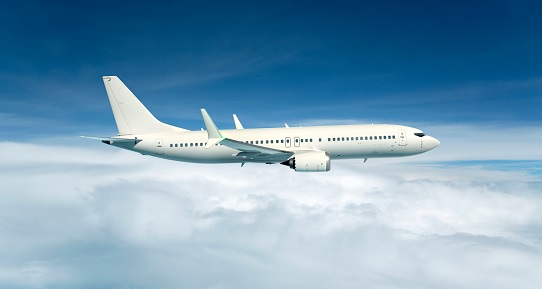 329
SHARES
8.3k
VIEWS
Share on FacebookShare on TwitterShare on WhatsApp

Boeing’s current share price is $234.80 and the average broker price for Boeing is currently $257.87, so there is likely to be at least 10% upside movement if the news flow remains positive. Current earnings per share (EPS) predictions for next year are 514.80%, which reflects the optimism that Boeing will benefit greatly from the opening of the economy post COVID-19 pandemic, and for the company to get over all the recent problems which prevented them from delivering new 737 MAX aeroplanes until recently.

EPS Growth is used by investors to determine the rate at which a company is growing in terms of its profitability. The percentage change over can be forecasted, and Boeings 1 year forecast is over 500%. A stock with higher earnings-per-share growth rate is usually more desirable to investors than a stock with minimal growth expectancy, but these high forward-looking ratings generally come back to a mean average, lower. Over the last month there have been a couple of broker upgrades, with Canaccord Genuity, upgrading Boeing to $200-$275, and Bernstein’s upgrade projections of $196 – $229, currently being beaten by the months share price.

In April 2021, the Dow Jones Industrial Average closed 3% higher, while Boeing’s share price was down 8%. 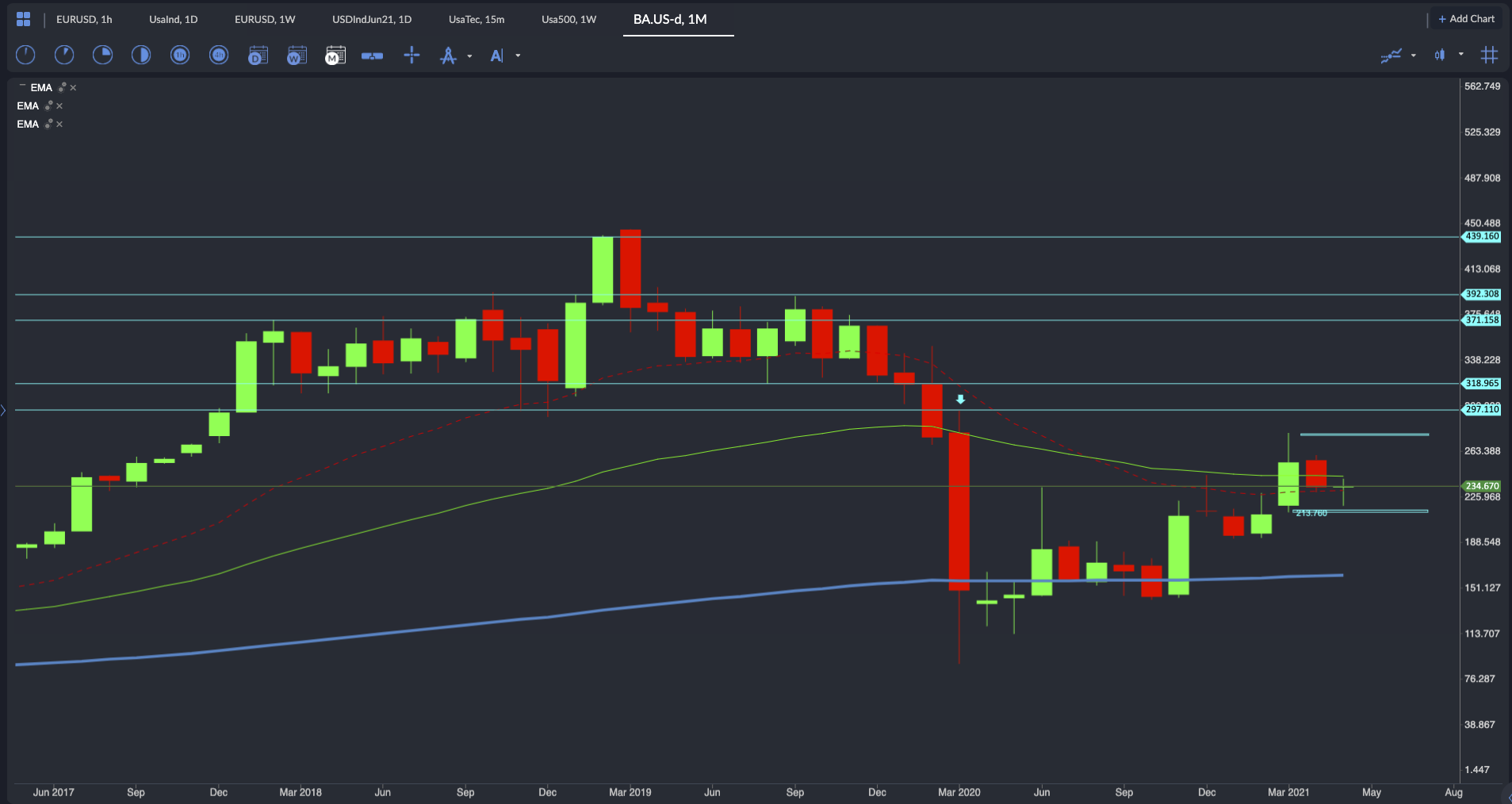 In Q1 2020, the company booked an operating loss of more than $1.3 billion but have clawed back some of the losses and extraneous drags to the company, getting back to breakeven in 2021. The 737 MAX jets had to be grounded (again) due to electrical issues, which put pause to deliveries of the new ones while the company looked to rectify the problem. The disruption then led investors to get spooked out of their weak longs bringing the share price nearly 16% lower from March’s peak price.

The electrical problem affected a backup power-control unit and two cockpit components and from the detailed analysis was due to a decision to apply primer after holes were fully drilled, rather than before. This impeded the racks’ ability to serve as an electrical grounding path, which is a problem in electrical storms, should the planes get hit by lightning.

Hundreds of planes made since early 2019 could have been at risk, but a month later the share price rebounded, as Boeing informed the carriers that its electrical fix received Federal Aviation Administration approval and that the fix was relatively simple.

The 737 MAX electrical grounding issue comes on the back of a couple of devastating 737 MAX crashes, one in 2018 and the other in 2019, which killed a total of 346 people. The planes were grounded and given a 20-month safety ban, which was lifted last November.

Boeing is bigger than just one aeroplane and net jet orders were positive in April for the third straight month. Boeing received 25 new orders, including five for 777s and 20 for 737s, compared with 17 cancellations and actually delivered nine 787 Dreamliner’s in April, the highest monthly total for the plane in more than a year.

The positive news continues to build with Lufthansa Group agreeing to purchase 787 Dreamliner’s, and the Malaysia Aviation Group ready to accept 737 MAX deliveries from 2024. 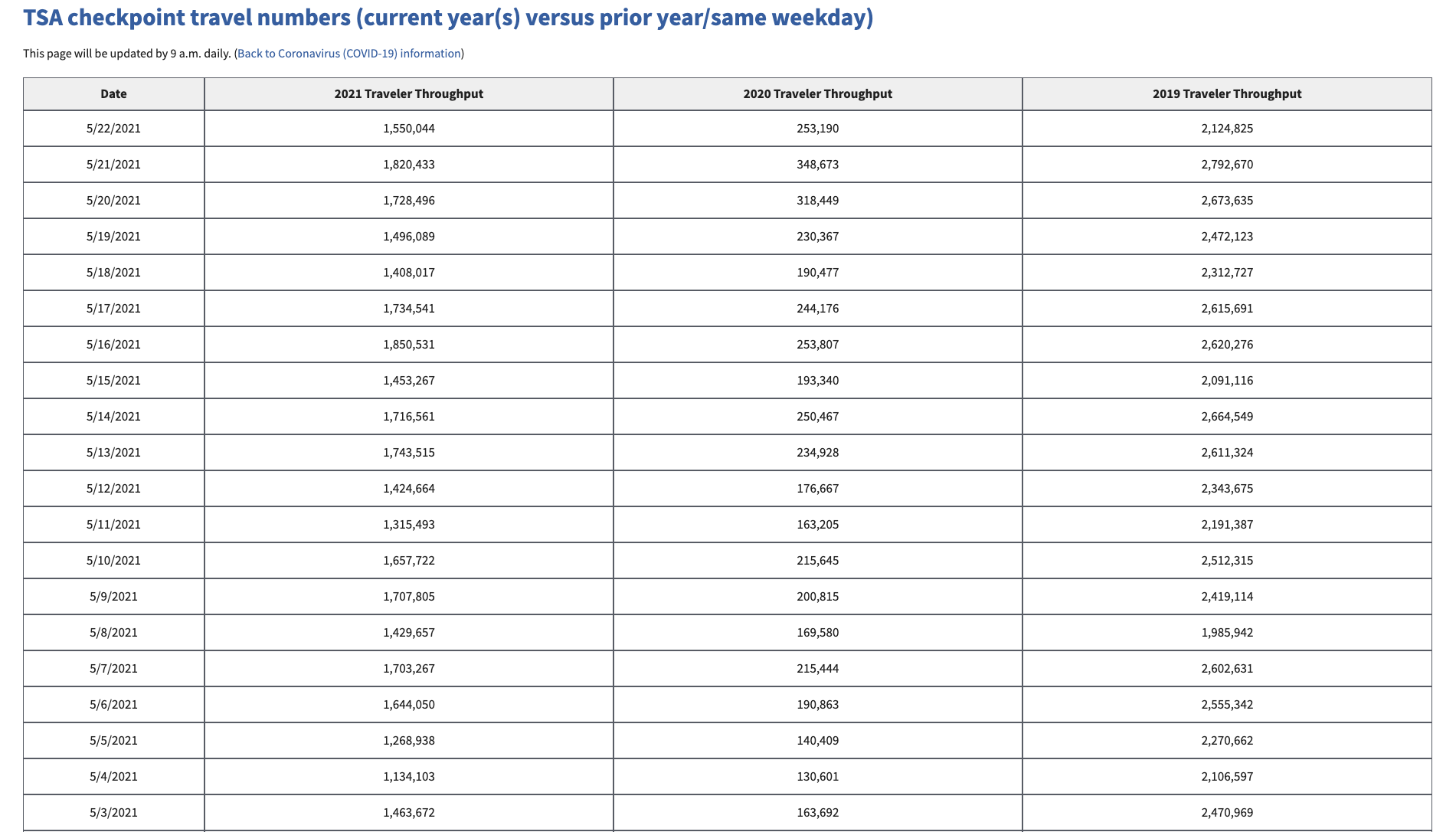 Recent Transport Security Administration (TSA) data shows that air travellers are returning, but Boeing had cautioned earlier this year that it did not expect global airline passenger traffic to return to 2019 levels for at least another two years.  That view was echoed by the head of the International Air Transport Association lobby group, Willie Walsh, who told reporters in Dublin that staff cuts and a dearth in new aircraft supply means the “ability for the industry to recover to the 2019 levels of capacity quickly is now impossible”, adding the return may in fact take several years. 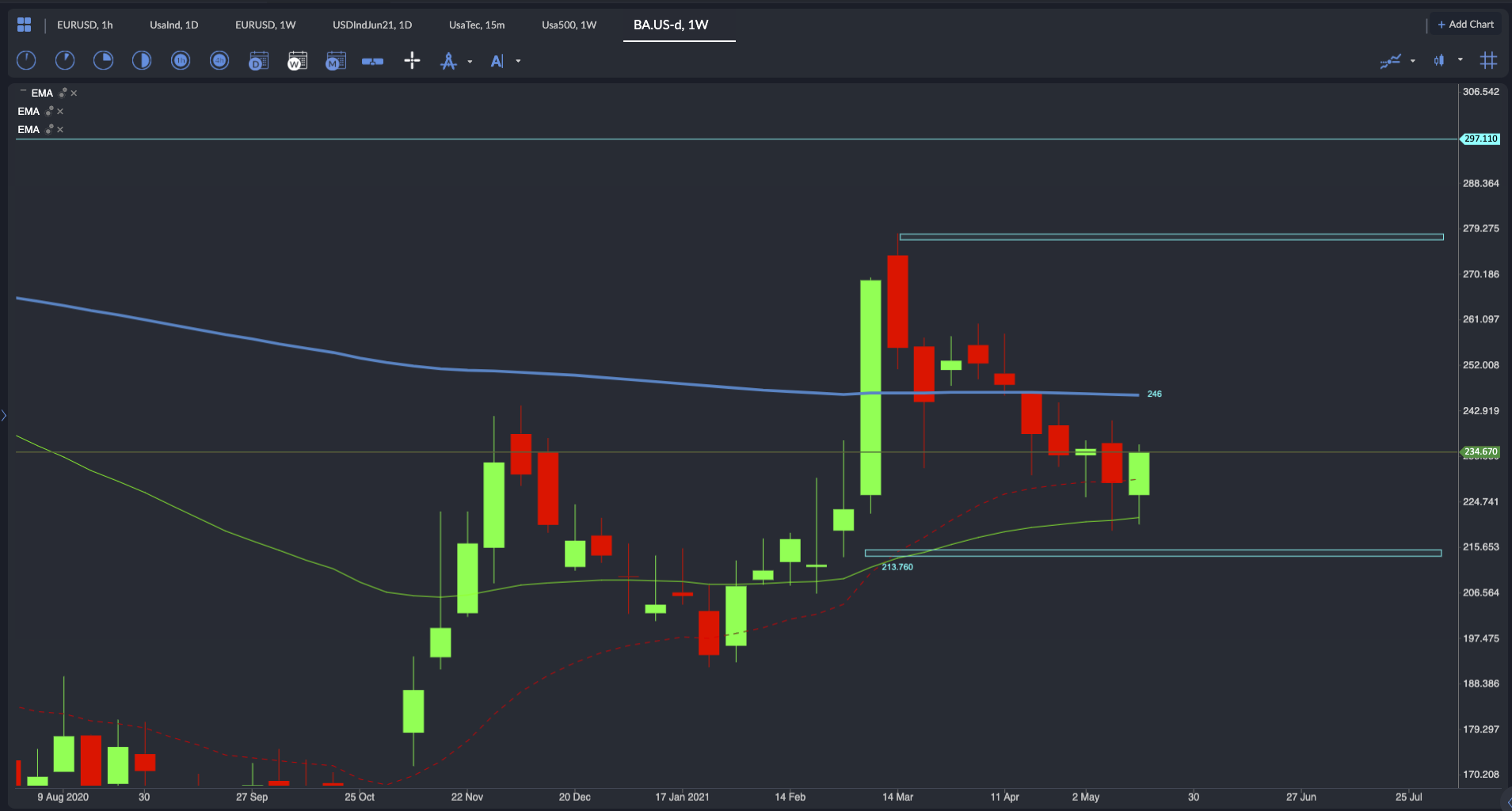 The low which printed in March is a key level of support currently. If it were to break that would be confirmation of an inside candle market structure break, and a sign of real weakness. Whereas a break above March’s high print following the sweep of April’s lows would be a sign of real strength, as the weak longs would have been already shaken out and anyone short would have to cover, meaning prices would accelerate to the upside. 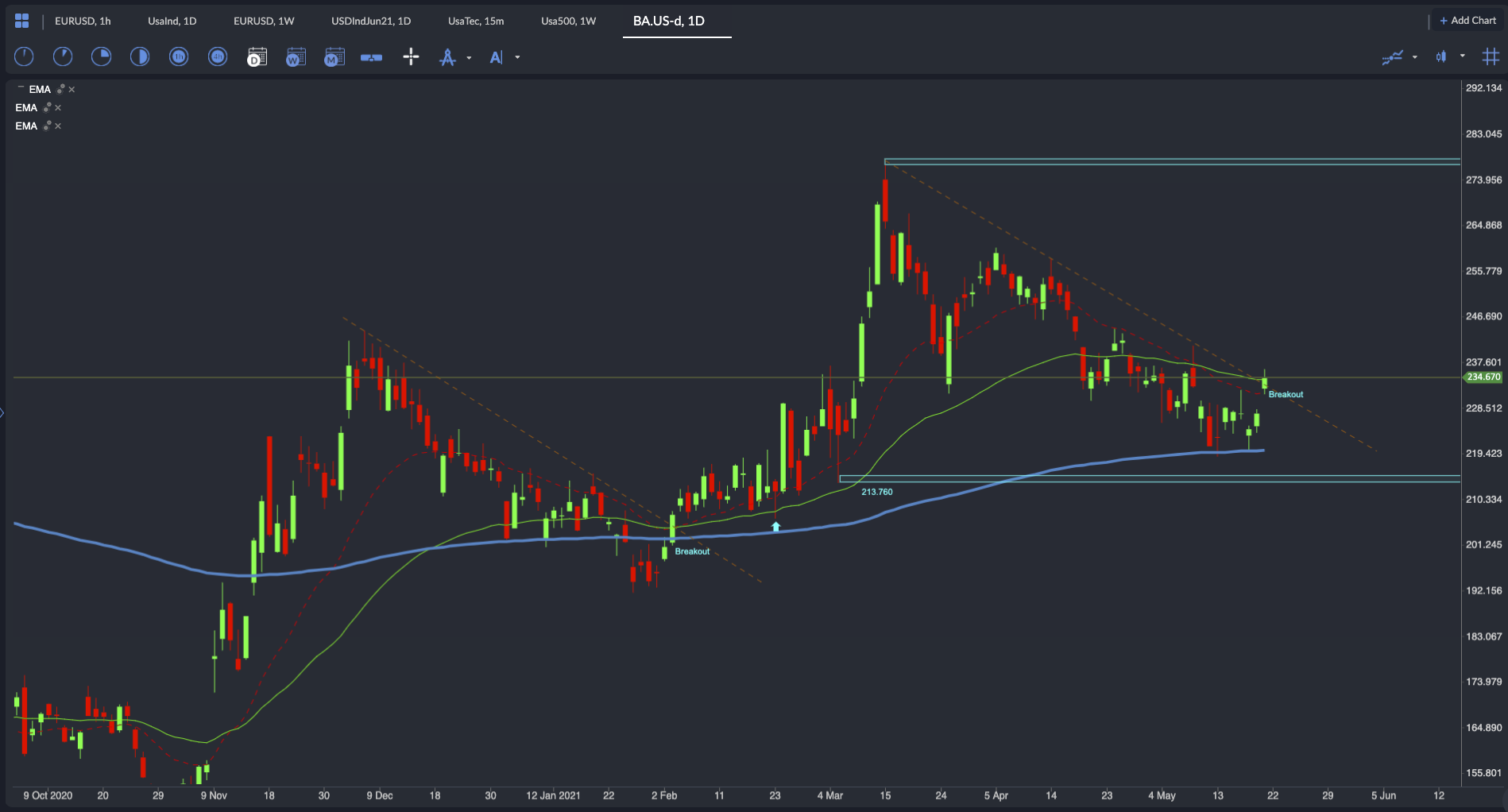 On the daily chart for Boeing, the 200 ema is acting as dynamic support, but on the weekly chart we can see that the 200-period moving average is currently the first roadblock to a continuation of higher prices.

Positive news and positive price action usually end up with positive momentum, and the daily chart shows a break higher from a downward sloping trend line, which originated from the March highs, after the price had found support at the 200 period ema. If we look left along the chart, a similar pattern had occurred, and following on from that breakout price action, the 20 ema crossing above the 50 ema, signalled the rally to $280.00 and the recent swing high.

Airbus was getting ready to pounce on the misfortune of their greatest rival should the electrical issue have grounded the 737 MAX for longer. The European plane manufacturer suffered a major loss in share price as coronavirus pulled the rug from underneath the airline industry, but they are now showing signs of strength in these uncertain times. 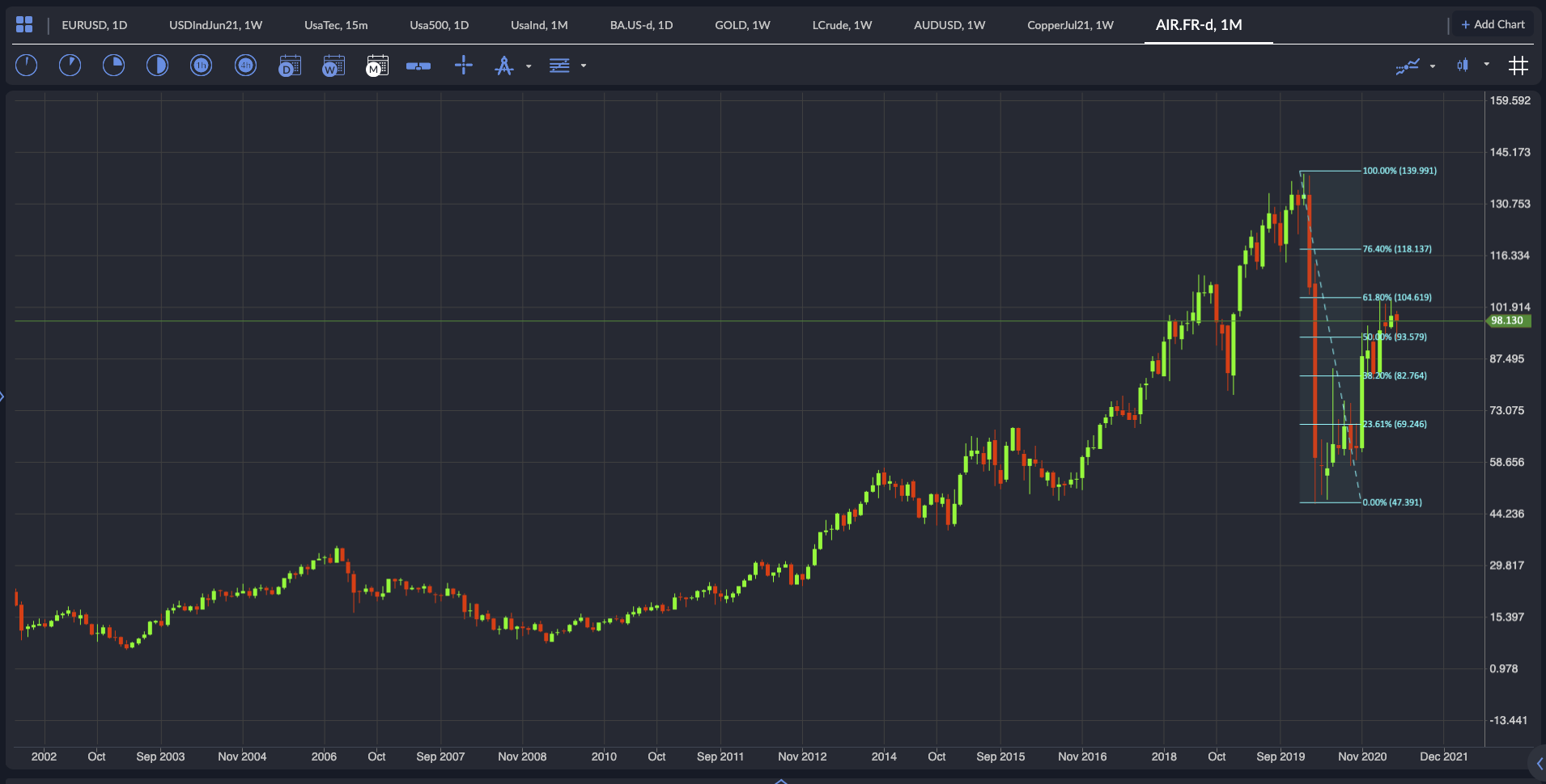 The chart for Airbus indicates the rally has got above the 50% pull back and has been tackling with the 61.8% fib retrace for a few months now, which I take as a positive and likely to show higher prices assuming the COVID variants do not scupper the summer tourism industry too much more.

Analysts will be cautious to get too excited by the current rise in price, but it is positive for the airline industry to see numbers of travellers rising again and for carriers to be placing orders with manufacturers. As per the rest of the economy, the path forward will be dictated by the way in which we handle the COVID variants, having seen a majority of vulnerable people now vaccinated. Boeing really needs a good run, to get back into profitability and to see if the share price can rise to the highs again or more realistically not fall back 10% with further disruptions to their fleet of aircraft models.

For speculators, the positively stacked 20,50 and 200 ema’s will provide indications of pullbacks and possible dynamic support zones for traders to take a long position from. The last pullback following a trend line breakout took 14 days to set up, so having Boeing on a watch list and checking in each night is advised, with $190 acting as both key support and a line in the sand that bulls do not want to cross.

Risk-On today, as equities trade higher at the US open 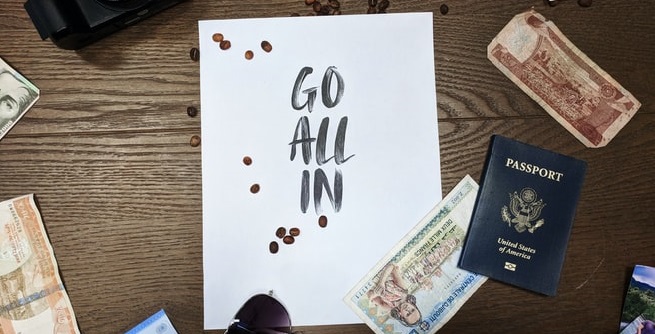 Risk-On today, as equities trade higher at the US open