321
SHARES
8.1k
VIEWS
Share on FacebookShare on TwitterShare on WhatsApp

The price of West Texas Intermediate oil is trading in an increasingly narrow price range as market participants are becoming unsure as to which way oil prices are eventually going to break next.

WTI oil broke its four-month winning streak last month and closed March well under the $60.00 benchmark level. A lack of fresh downward momentum has caused traders to pause and reflect as to whether the worst of the selling pressure is over.

Bullish tones coming from the financial markets due to outperformance in the US economy in March has failed to lift WTI back towards the $60.00 level. Crude inventories declined 3.522 million barrels last week, compared with analysts’ expectations for a draw of 1.436 million barrels.

In terms of what the big oil companies are saying, Shell, a major oil producer, which is also prevalent in many petrol stations across the globe, expects its fuel sales to fall or at best to be broadly steady for the first quarter.

The company also said it saw refined oil product sales at 3.7-4.7 million barrels per day for the first quarter compared, with just under 4.8 million BPD in the last quarter of 2020. It had previously forecast sales of 4-5 million BPD.

It is certainly possible that the price of WTI oil could remain capped below the $60.00 benchmark level and be set for more losses. Looking at the bigger picture, it can certainly be said that the oil market may need to see a strong demand return before a sustainable bid above $60.00 takes hold again.

Market sentiment towards WTI oil slightly remains bullish, with some 56 percent of traders holding a positive outlook. This is not a strong sentiment skew, and it is hard to draw any solid conclusions from the current sentiment skew.

The four-hour time frame shows that WTI oil has moved into an extended period of price consolidation. Typically, when the Bollinger Bands start to narrow or constrict then a directional breakout is close on the horizon. 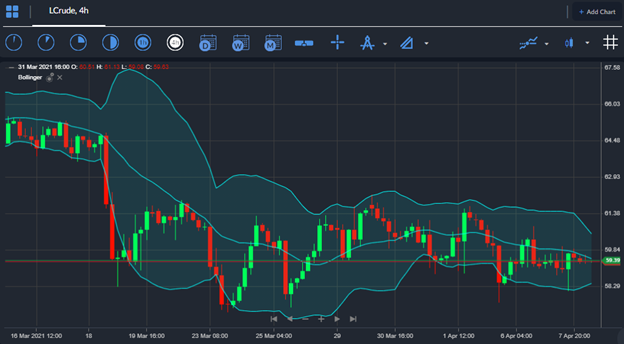 Looking at the daily time frame a head and shoulders pattern appears to be forming, with bears needing to hold the price below the $57.80 level to activate the bearish price pattern.

It is noteworthy that the overall size of the price pattern is highlighting that a price decline of some $10.00 could take place if the price starts to break neckline support.

Overall, watch out for a major decline in oil prices if weakness starts to take hold below the $57.80 level on a multi-day basis. 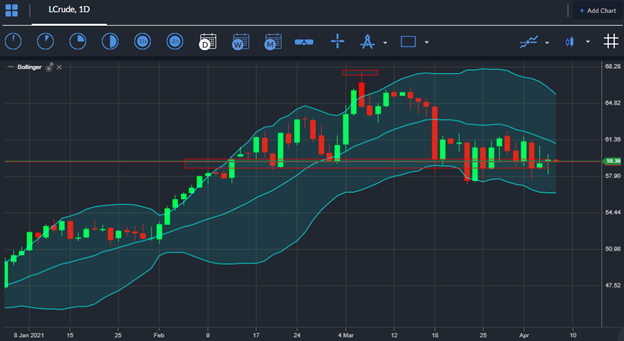