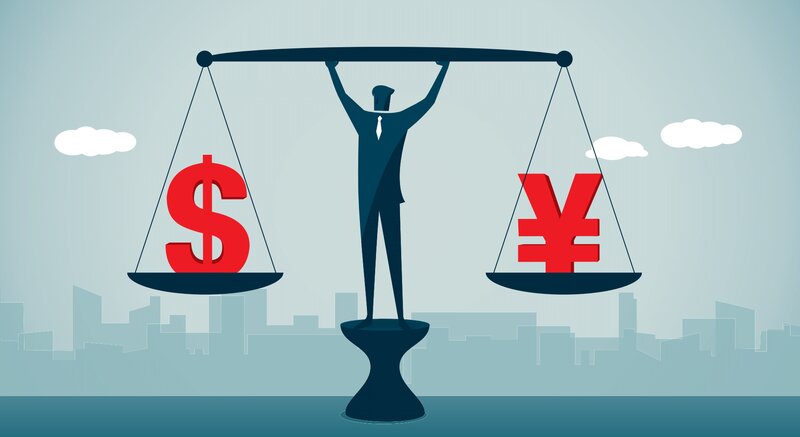 437
SHARES
10.7k
VIEWS
Share on FacebookShare on TwitterShare on WhatsApp

The US labour market data was mixed news for USDJPY, overall, the report was bullish on the US employment situation, but the headline figure was 50% lower than expectations. It’s hard to get too excited when the one data point you, the institutional investors and news algos are all waiting for, comes in that far under expectations.

The main positive for me was the unemployment rate lower and a revised higher November NFP. While the unemployment rate from the BLS survey as well as strong wages growth suggest the Fed needs to get a move on in terms of reducing its stimulus, the non-farm payrolls data suggests no such rush. Whether the market and in particular the bond market will give the FOMC room to manoeuvre is to be seen. The FOMC need to save face and get inflation, which is price stability, back under control. They need to be seen to be doing something. After the market had been pressing them to reconsider the transitory nature of this inflation spike. It is not just the money managers who need to know whether inflation is going to run hotter for longer. The US President needs to know whether the electorate, come the mid-terms, are going to judge his policies in a positive light or not.

Expectations are that the Fed’s emergency level QE ends in mid-March and rate hikes will follow soon after. The US CPI data on Wednesday will also be critical for USDJPY. The Fed seems to be a bit more concerned about inflation than the labour market. Indeed, the Minutes to the December meeting suggest the FOMC is broadly content with the labour market now but is growing increasingly uneasy about inflation. 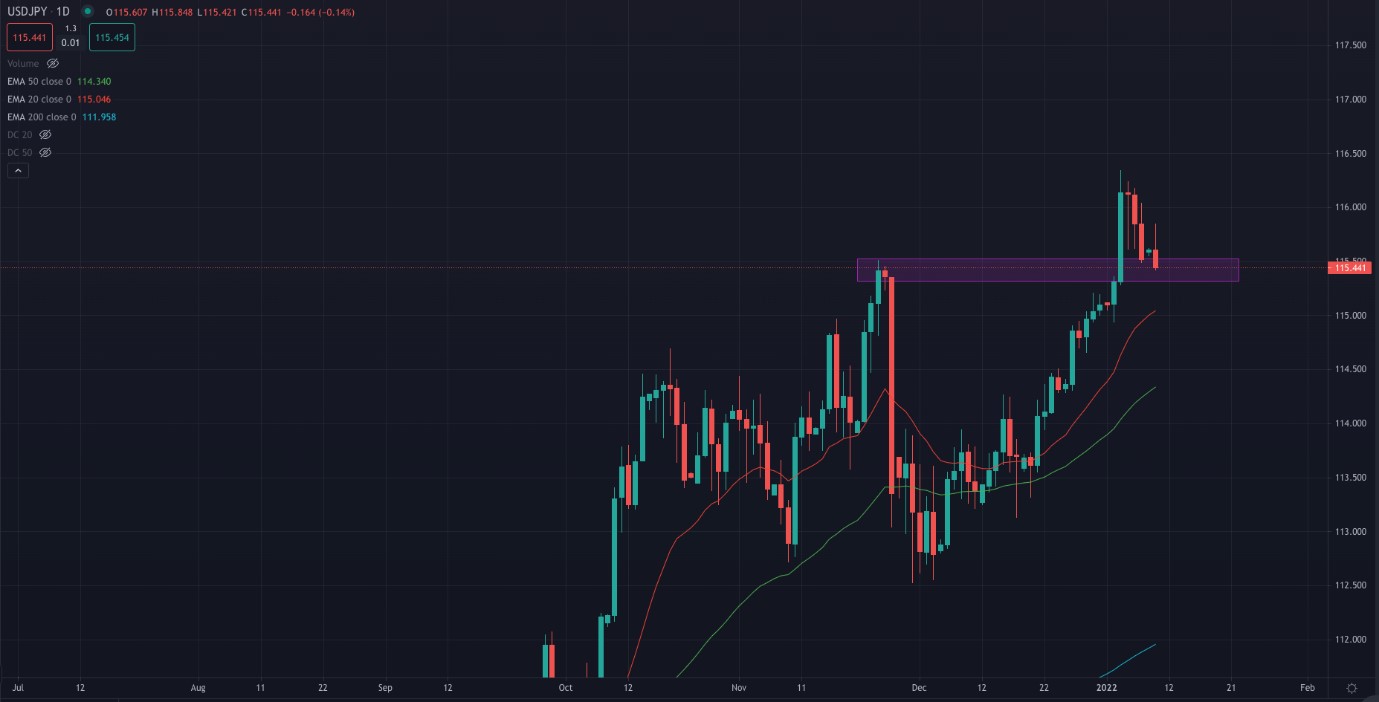 The price zone between 115.30 and 115.50 is an important area of support for USDJPY, and US CPI data later this week may determine whether this level holds.

The yen is a risk barometer, and there are some big risks in terms of geopolitics and global economics. The Omicron variant of Covid has reached mainland China, ravages through Europe and disrupts the economies of nearly every nation it touches, including the United States.

Additionally, several meetings between Western and Russian officials this week could impact sentiment and risk. The first meeting is between Russia and the US today, then between Russia and NATO on Wednesday and finally between the members of the Organisation for Security and Cooperation in Europe on Thursday.

The moves in Kazakhstan and around Ukraine seem very timely with these high-level negotiations, with NATO likely to question why Russia is being so aggressive and somewhat expansionary in their moves into these former Soviet countries. Putin will have the same questions about NATO’s intentions as well as the European Union’s intentions with these countries.

Kazakhstan is a very oil-rich country and if the protests were about rising oil, they would have been quelled by the re-introduction of price subsidies which dropped the cost of energy following the unrest. Islamic militants are now being blamed. For those with a tin-hat, we could probably include the CIA/MI6 and any other known political disrupting force from the west. Fingers crossed cool heads take part in these meetings and we get back to the status quo.

If we don’t see a reduction in the number of newsworthy events on Russia’s borders, we could see the yen go bid. While risk-off could ensue with bad meeting outcomes, higher oil prices would provide USDJPY with some support.

The ActivTrader sentiment indicator is showing an extreme number of traders on the platform are shorting the USDJPY, so as a contrarian to these traders I would be looking for reasons to go long from support. If the 115.30 doesn’t hold. The daily 20 and 50-period moving averages may be the next logic support zones at 115.042 and 114.338 respectively. 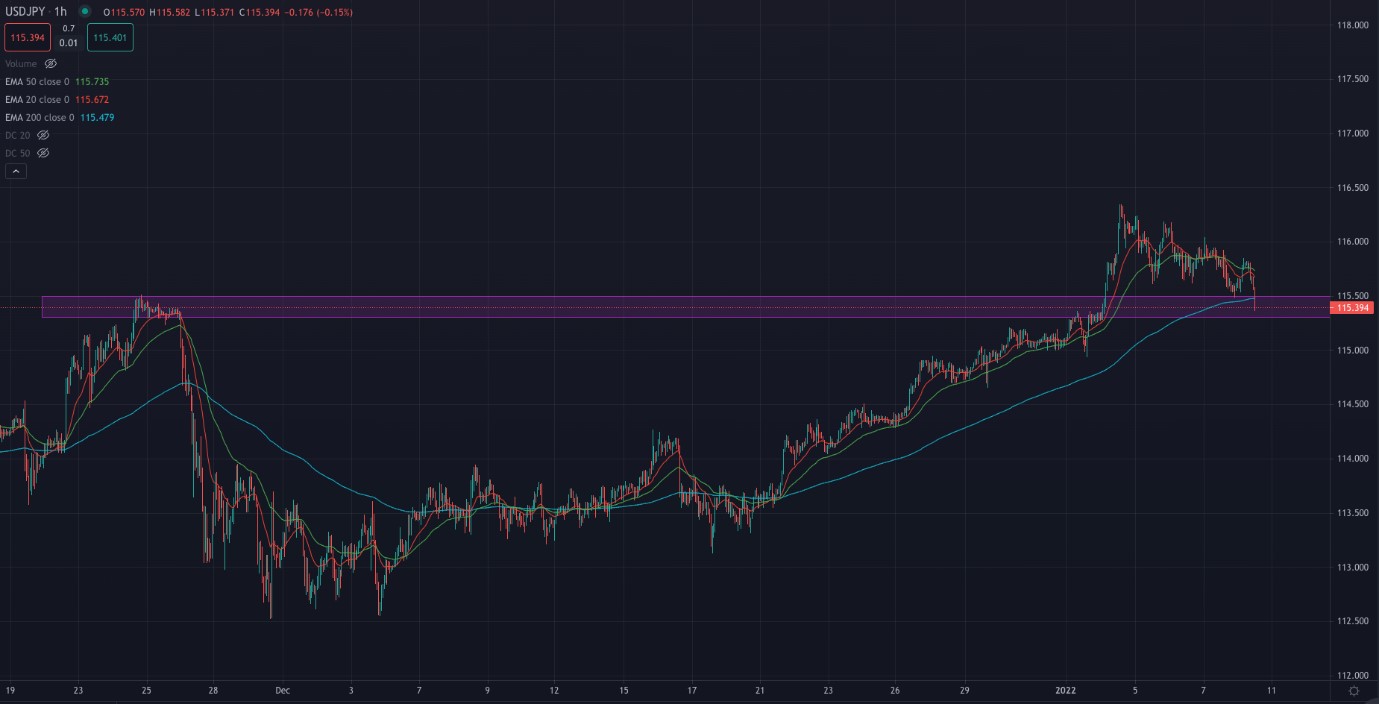 The 200-period moving average has just given up its dynamic support on the intraday H1 chart. However, as the price action is within the 115.30-115.50 zone, an hourly close back above the 200-period EMA could be the next signal to go long.

Dollar traders will pay close attention to US CPI this week

Dollar traders will pay close attention to US CPI this week