Today’s US CPI data sends the US dollar lower 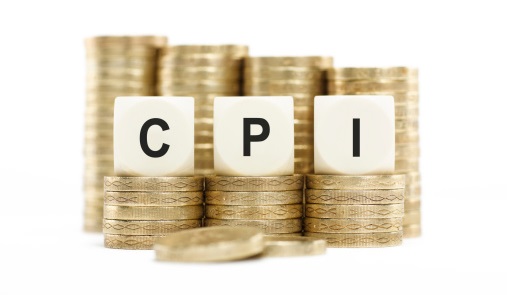 445
SHARES
12.1k
VIEWS
Share on FacebookShare on TwitterShare on WhatsApp 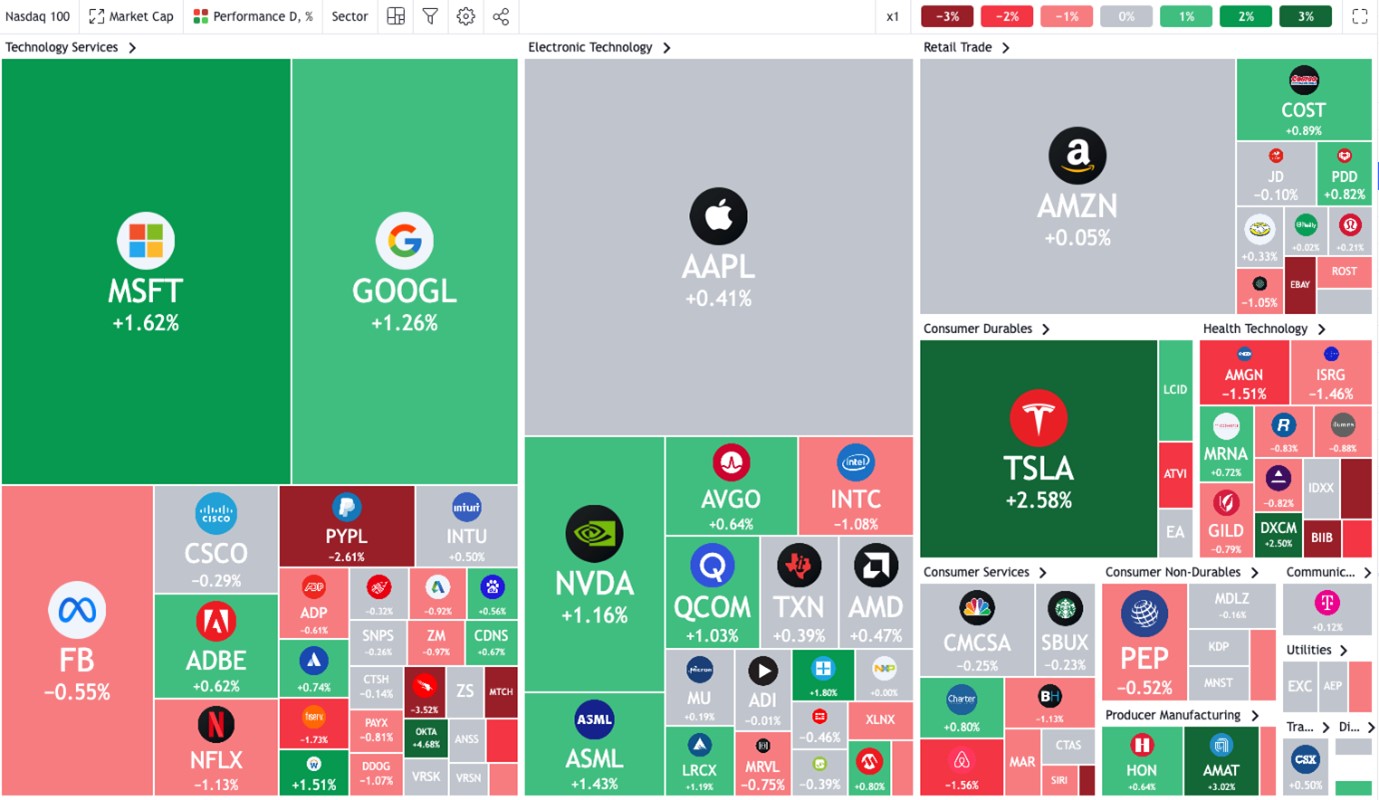 Currently, the S&P500 and Nasdaq are trading back into last week’s trading range. We are looking for higher daily swing highs following this week’s weak opening and the subsequent reversal on Monday. The move higher in the technology space is being driven by Apple, Microsoft, Amazon, Facebook, Tesla and Google. These companies are represented in both indices. Also, Fed Chair Powell gave a testimony that was less hawkish than some had expected, resulting in a positive response. 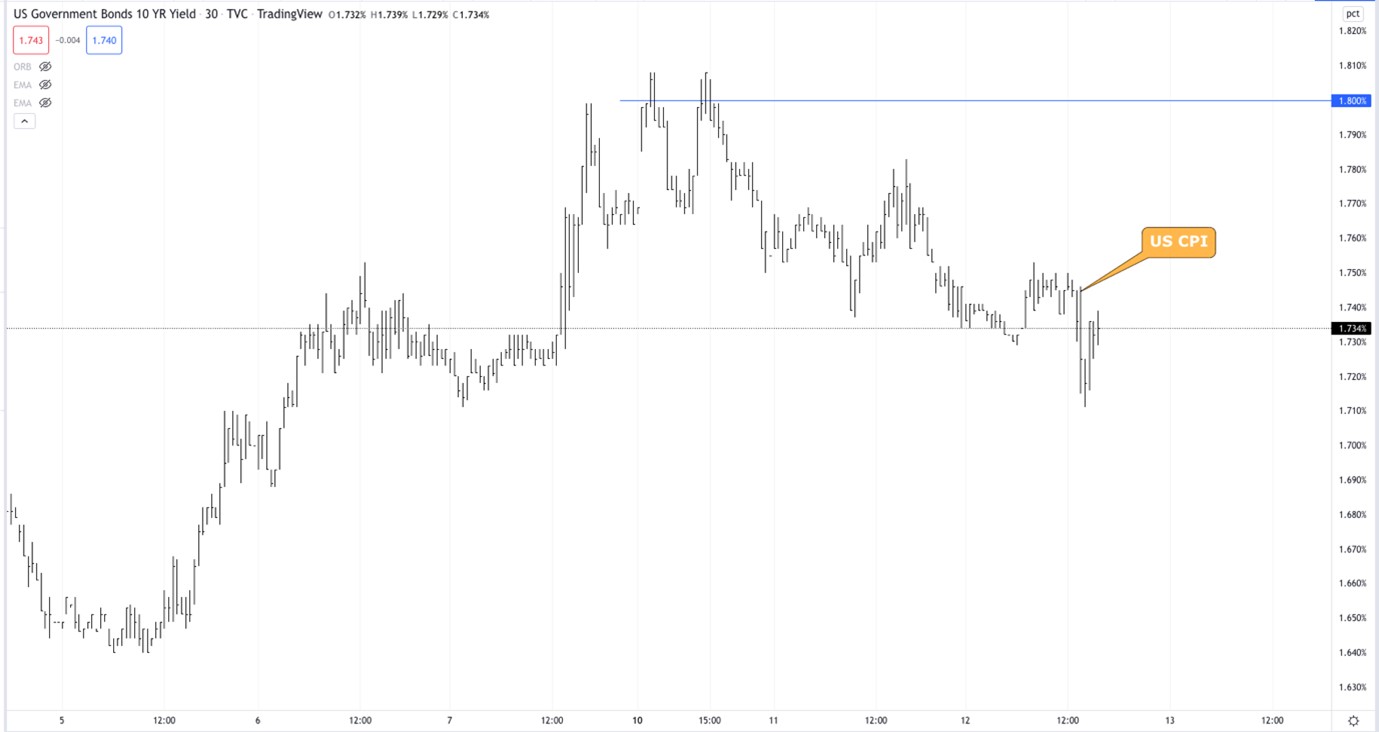 Markets are paying close attention to the move in Treasury yields right now. With yield appreciation slowing down, technology stocks are gaining support. Not only is the US dollar coming lower, but the monthly rate of change in the CPI is also levelling off. According to the US Bureau of Labour Statistics, the Consumer Price Index for All Urban Consumers increased 0.5% in December after rising 0.8% in November. Before seasonal adjustment, the all-items index grew 7.0% in the last 12 months. Seasonally adjusted this rate of increase is less than expected and could be signs of inflation peaking. Nevertheless, this increase is the largest since 1982. The all items less food and energy index rose 5.5%, the largest 12-month change since the period ending February 1991.

In the report, increases in the shelter and used car and truck indexes were the largest contributors to the seasonally adjusted all items increase. As a result of the decreases in the gasoline and natural gas indexes, the energy index declined in December after a long streak of increases. This was flagged at the previous CPI data drop when President Biden said the November CPI (released in December) did not include the drop in oil price. 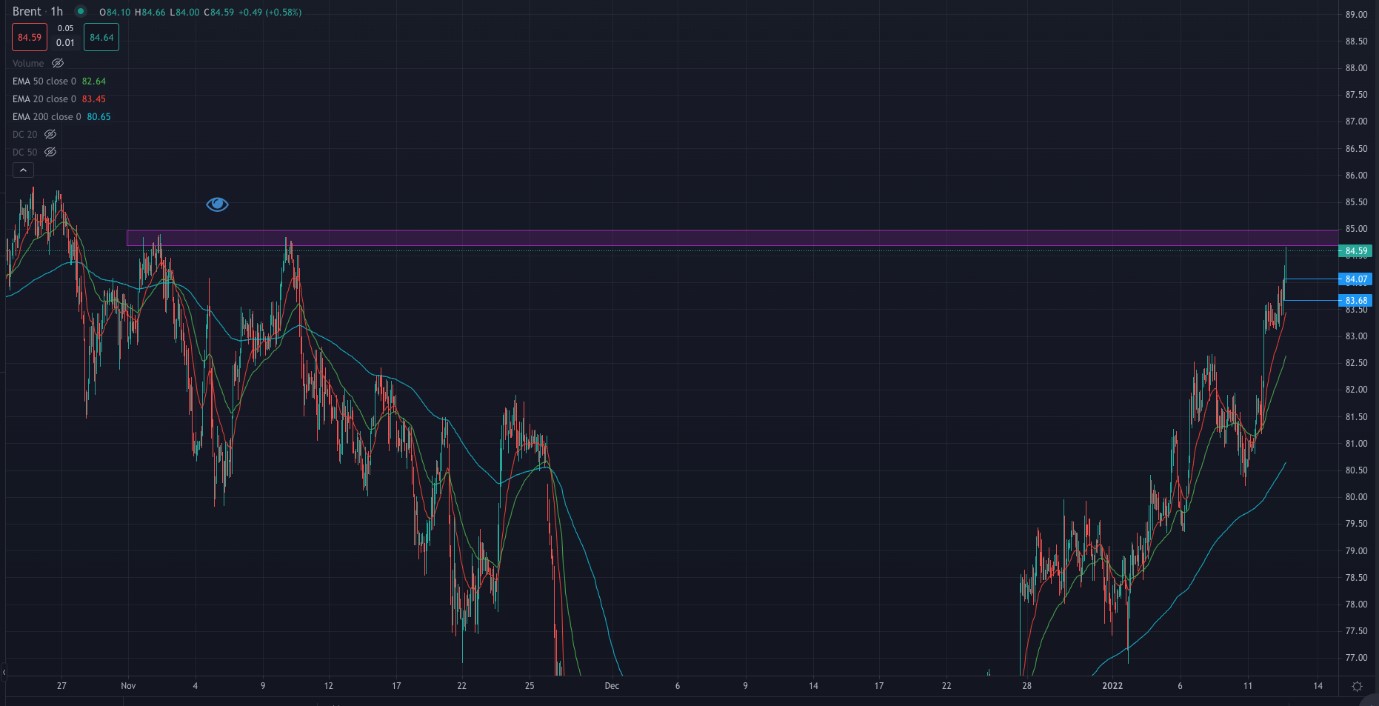 That being said, Brent is now moving higher and even got a bump today after the EIA report showed a tightening market and strong demand. For the week ending January 7, 2022, US crude oil refinery inputs averaged 15.6 million barrels per day, which is 293,000 barrels fewer than the previous week’s average. Last week, refineries ran at 88.4% of their operable capacity. Crude oil imports into the United States averaged 6.1 million barrels per day, an increase of 185,000 barrels per day over the previous week. There was a decrease in commercial crude oil inventories (excluding those in the Strategic Petroleum Reserve) by 4.6 million barrels compared to last week. In the United States, crude oil inventories are about 8% lower than they were five years ago. 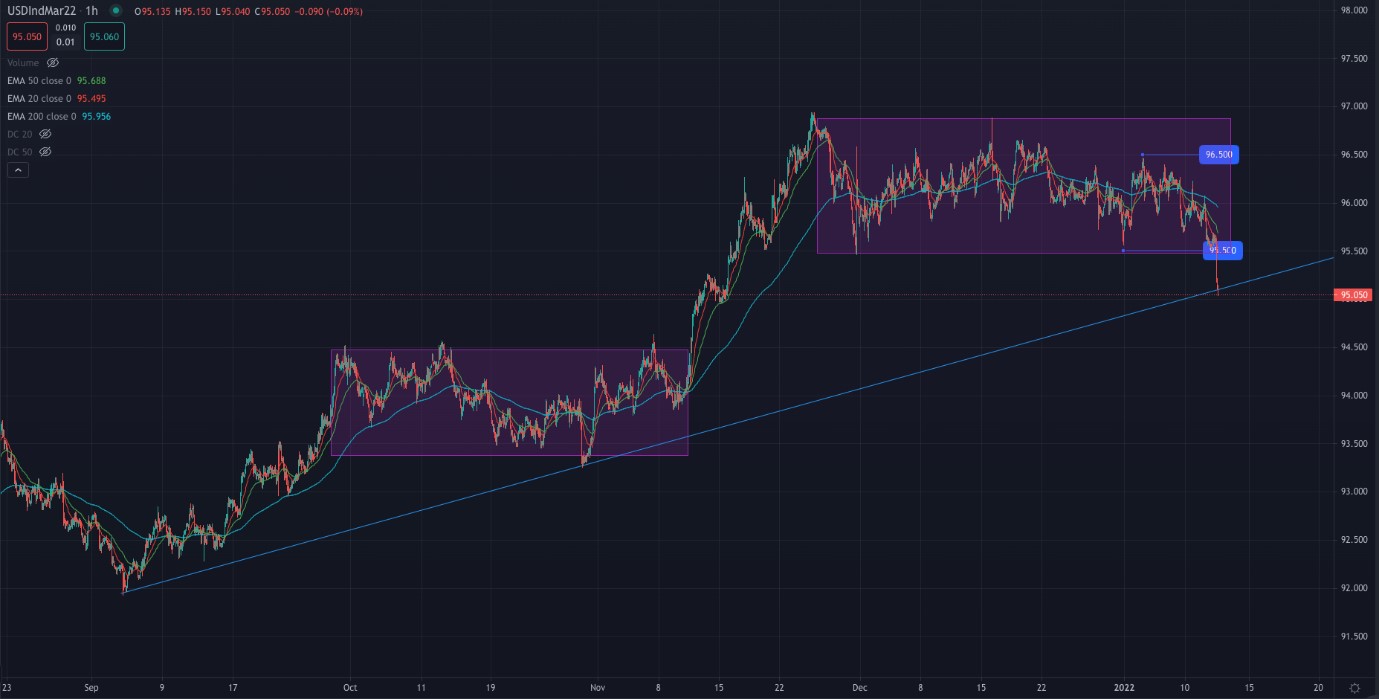 With the US dollar now testing a rising trendline that originated from last September, it will be interesting to see if we get a bounce at the $95 price level that coincides with the Brent oil double top being swept. A weaker US dollar below the $95 would add fuel to Oil’s rise and we could then be at 12-month highs again, undoing any idea of lower inflation next month. 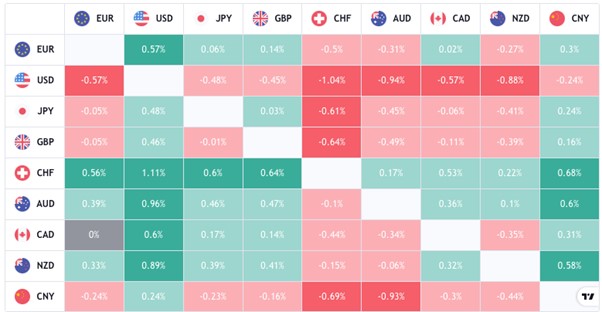 The forex heatmap is moving towards reflecting a risk-on market but except for positive flows into the Swiss franc. The reversal in the Chinese yuan is also interesting considering how weak the US dollar is today. 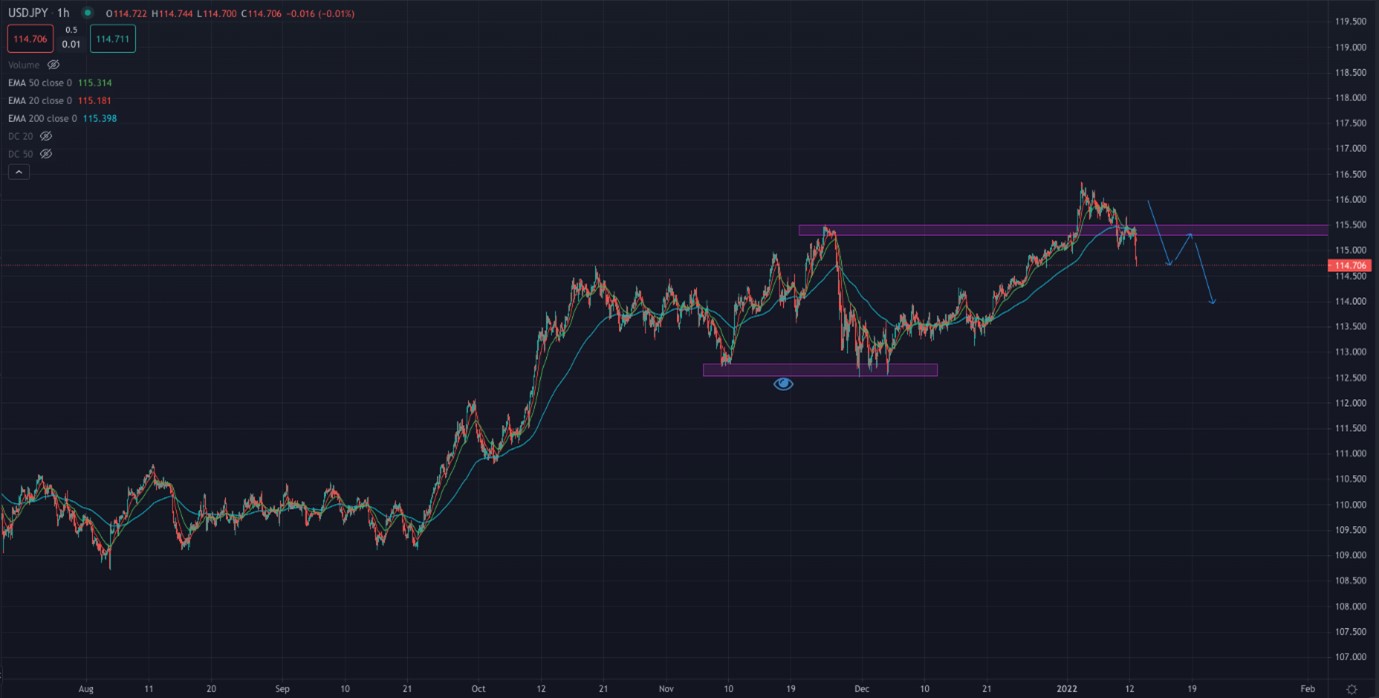 Today’s weaker US dollar has also changed my idea on the USDJPY. The 115.30-115.50 started out as a zone of interest, looking for buying opportunities. With the current market and price action that zone became confirmed resistance and now the price could go lower to sweep the 112.50.

As tempting as a 250 pip move to the downside is, I would find it hard to have any conviction in the short sale of USDJPY as the ActivTrader sentiment indicator shows an extreme number of traders on the platform shorting these levels. If they keep adding to their directional bias as we approach 112.50 I am expecting some short covering when the price first reverses.

US dollar falls after CPI release