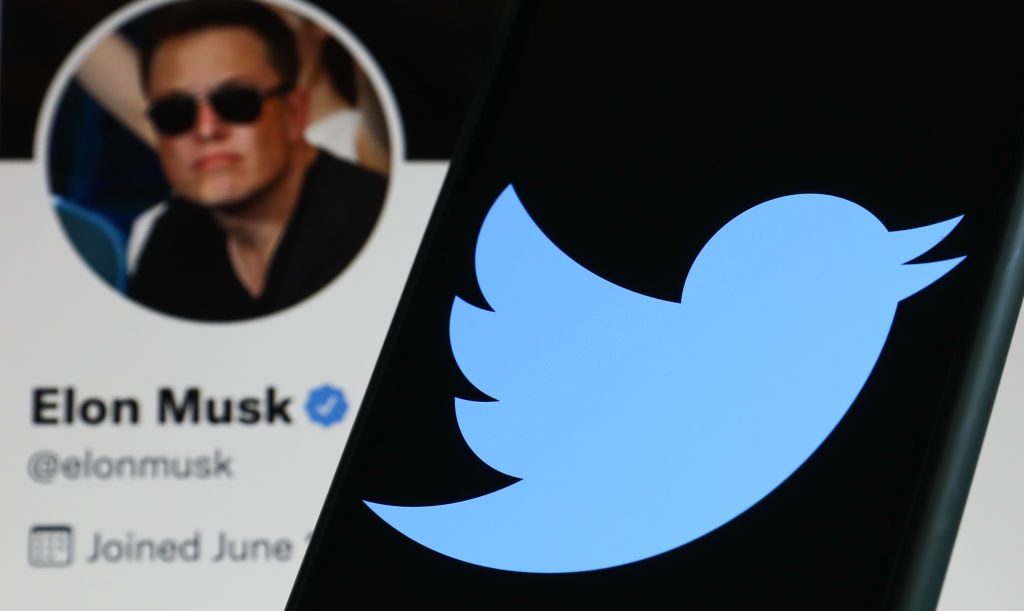 374
SHARES
11.6k
VIEWS
Share on FacebookShare on TwitterShare on WhatsApp 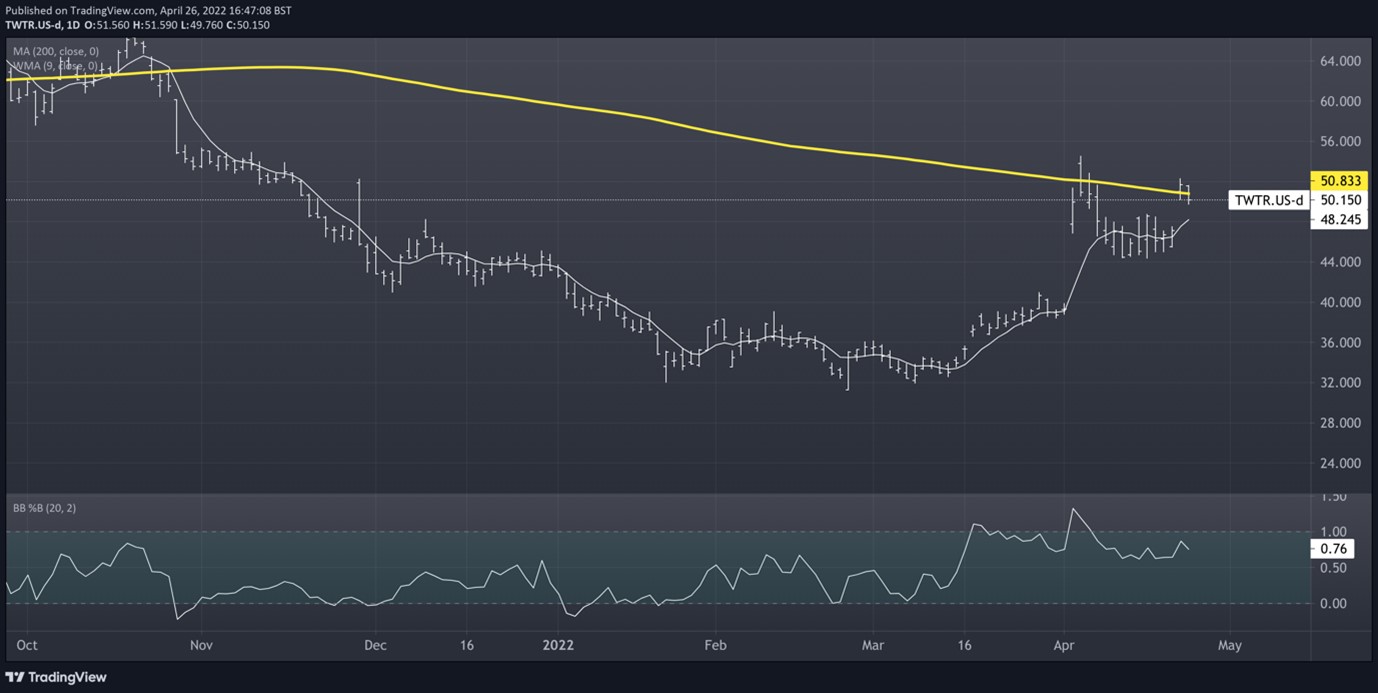 Twitter will be bought by Musk for $44 billion (£34.6bn) and because of the purchase, Twitter will become a private company and be delisted from the stock market. Within Musk’s statement, he said, “Free speech is the bedrock of a functioning democracy, and Twitter is the digital town square where matters vital to the future of humanity are debated.” He also pledged to make “Twitter better than ever by enhancing the product with new features, making the algorithms open source to increase trust, defeating the spambots, and authenticating all humans.”

Twitter gapped higher yesterday and then found the daily 200-period moving average to be a magnet. But it wasn’t all cheer for Elon as Tesla shares dropped over 10% with investors worried that he will now be pulled away from the car company to focus on the social media platform. 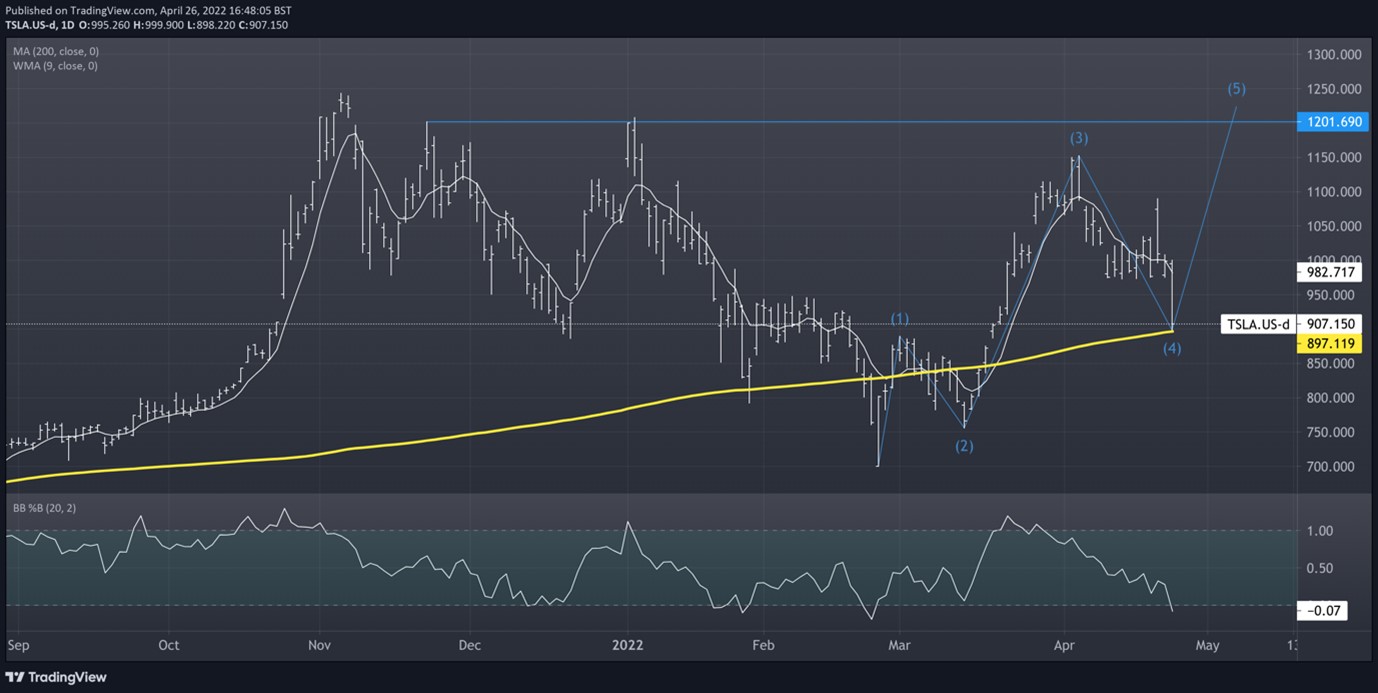 The overall stock market is down today with major indices dropping by as much as -2.50% as was the case for the Nasdaq at the time of writing. For chartists though, this is a technical dream come true. Tesla is fundamentally a disrupter and innovator within the automotive, green tech sectors. With batteries and Ai development as awesome side-lines. For those that follow the markets and use Elliot Wave Theory as a framework, the move by Tesla down to the daily 200-period average also means there has been a retest of the top of what could be considered wave 1 of the recent impulsive wave formation. If this is the termination of wave 4, that means we have 2 possible scenarios left. First would be a failed wave 5, which doesn’t breach the recent high or remove the liquidity above the double top at $1200, or a full wave 5 which could potentially extend beyond current all-time highs.

The number of orders for durable goods in the United States in March grew by 0.8% or $2.3 billion over the previous month. The Census Bureau also reported that the figures for February were revised to $272.7 billion.

Although the level of orders improved over the previous month, they still fell short of expectations. On a month-over-month basis, the order volume grew by 1.1% excluding transportation. Without defence, they increased by 1.2%. Electronics and computers contributed the most to the increase, increasing by 2.6% or $0.7 billion to $26.3 billion.

In its latest report on Tuesday, the Conference Board revealed that consumer confidence in the United States fell slightly in April. Consumer Confidence fell to 107.3 in April from 1076 in March. In addition, the Present Situation Index fell from 153.8 in March to 152.6 this month.

Today’s S&P CoreLogic Case-Shiller report detailed how home prices in the United States rose 19.8% in February on a yearly basis, up from 19.1% growth reported in January. This helped keep the US dollar towards the highs, though we did see a slight pullback before the next surge higher in the DXY on the news announcement. 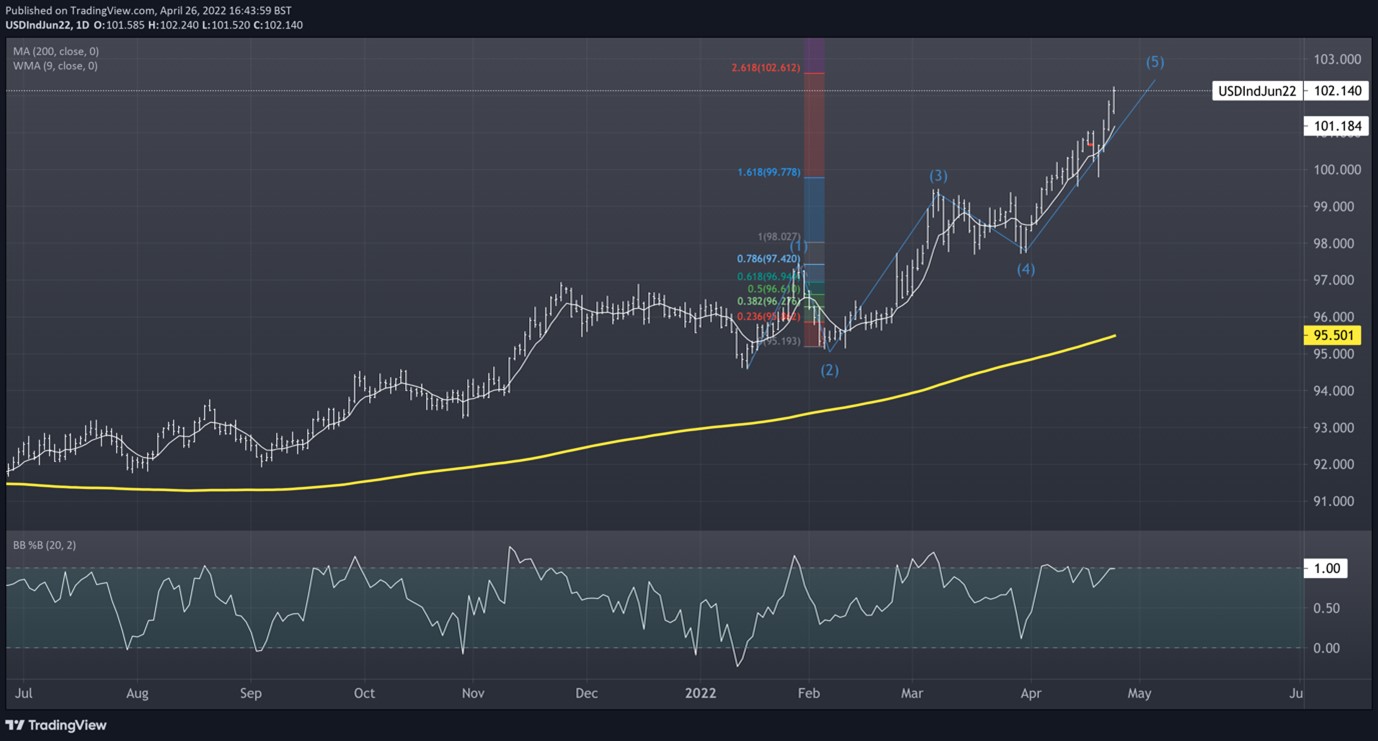 The US dollar index is pushing on higher towards the Fibonacci extension above the $102 level that was found earlier today. This influenced the major crosses, with the EURUSD and GBPUSD collapsing lower for the fourth consecutive day. 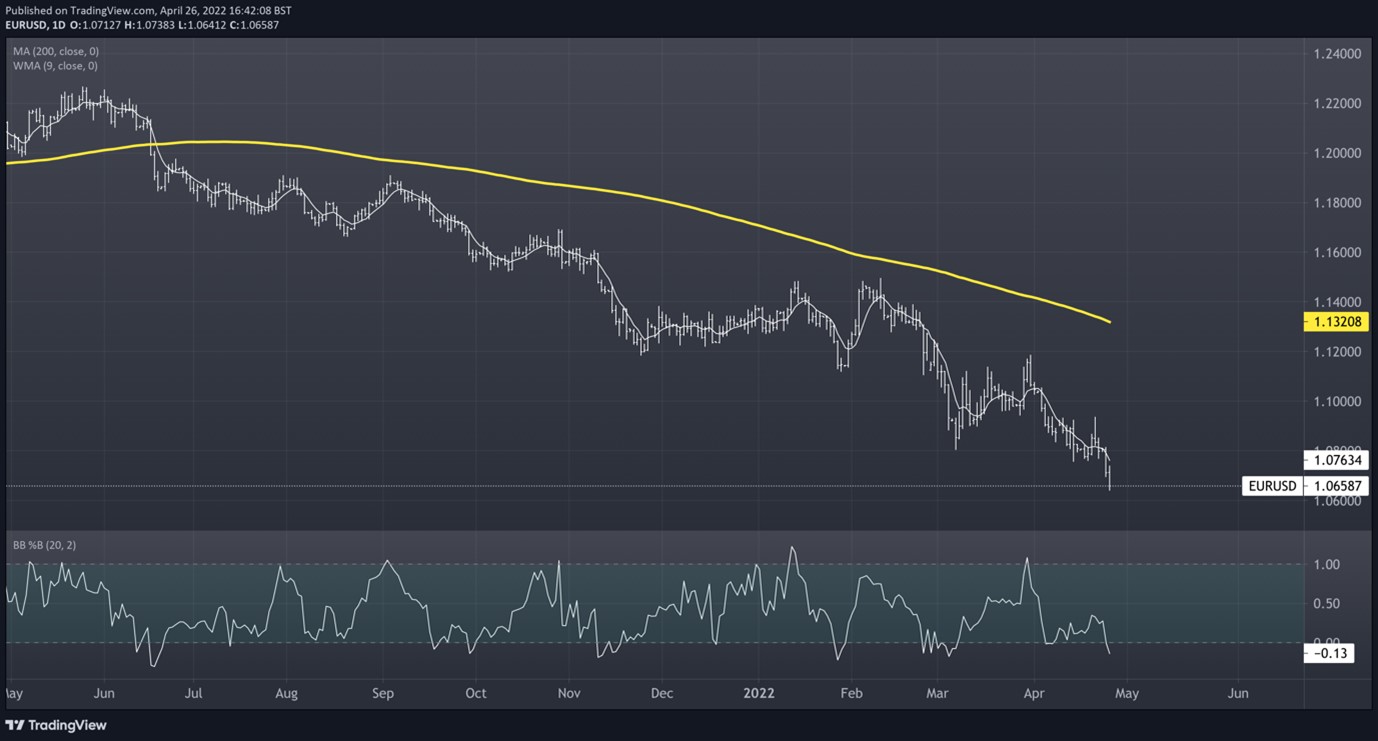 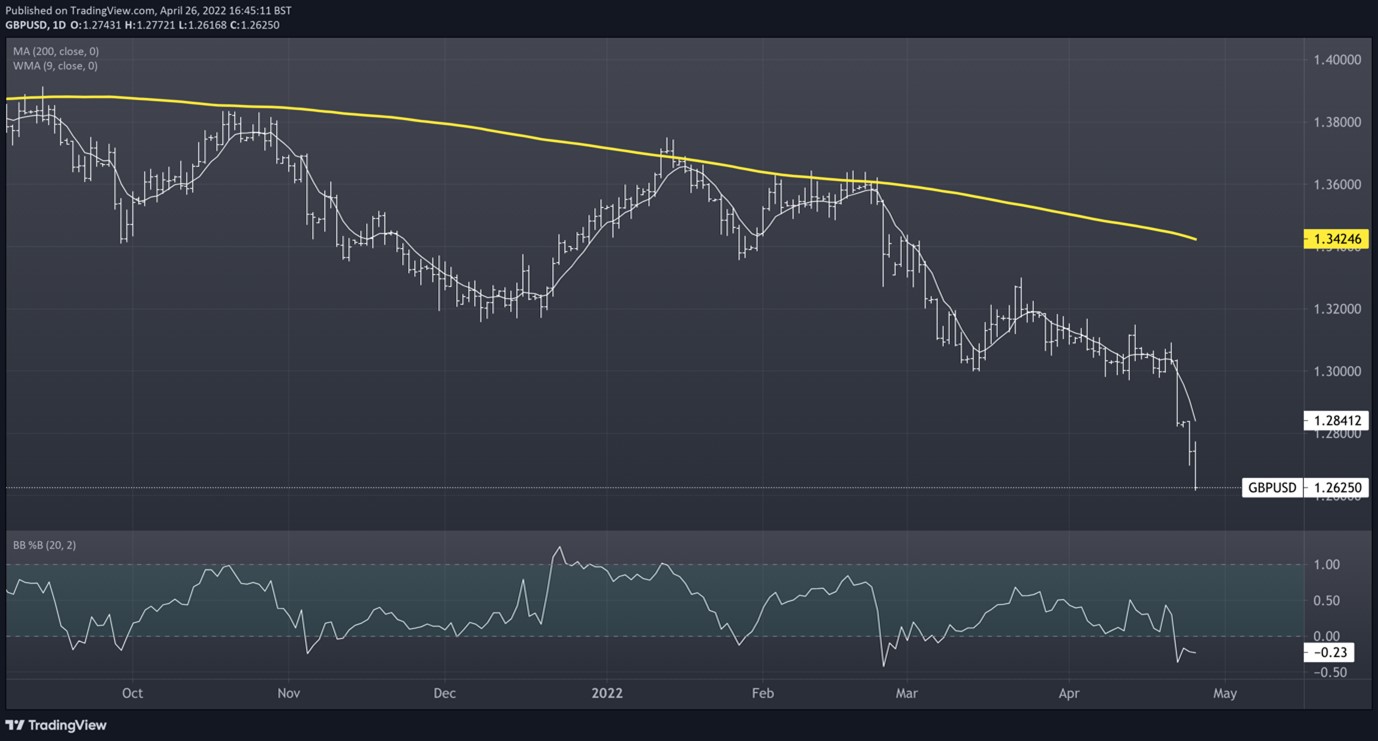 The EURUSD sentiment indicator on the ActivTrader platform shows how traders are still looking to be long, even as price action pushes through liquidity to make new yearly lows. Whilst there is such a heavy bias to the long side I am expecting to see lower prices for longer. 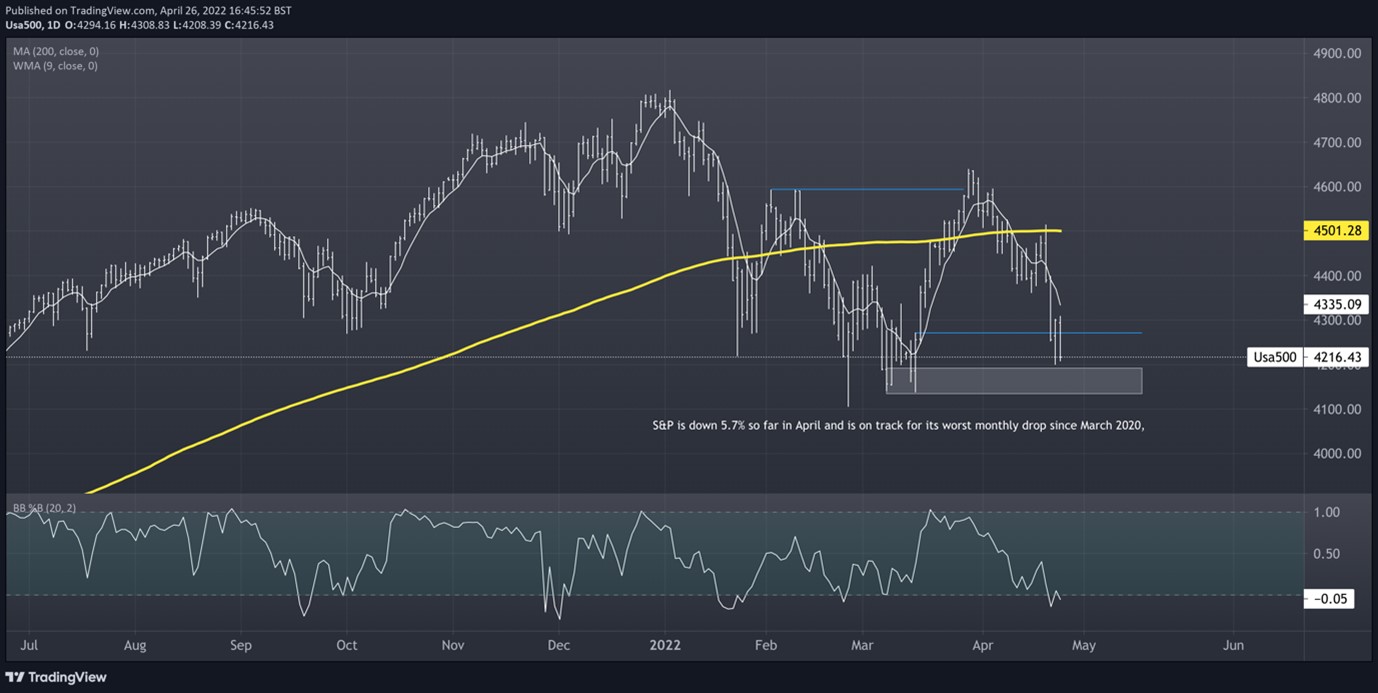 The S&P500 could still find some buyers in the demand zone, which is found just below current price action, and using the Bollinger Band %B indicator we can see that these daily closes are pushing the volatility bands at the lower extreme. Whilst price is below the daily 200-period moving average it would be hard to be a trend follower to the upside, but if we were to get a relief rally between now and the FOMC or NFP data, there is the real possibility of a short setup to look forward to. 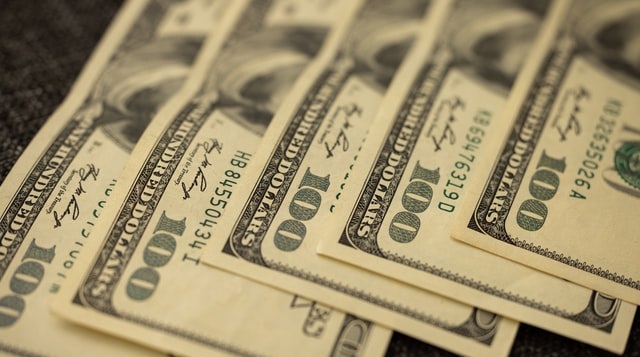