S&P500 Bear Market Rally Is Over 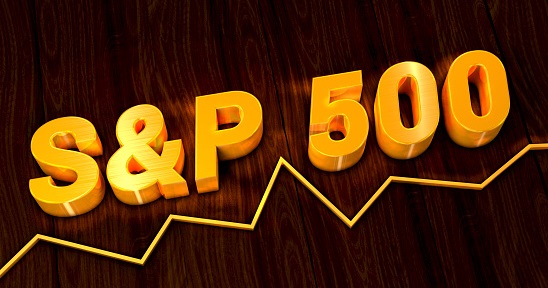 394
SHARES
11.6k
VIEWS
Share on FacebookShare on TwitterShare on WhatsApp 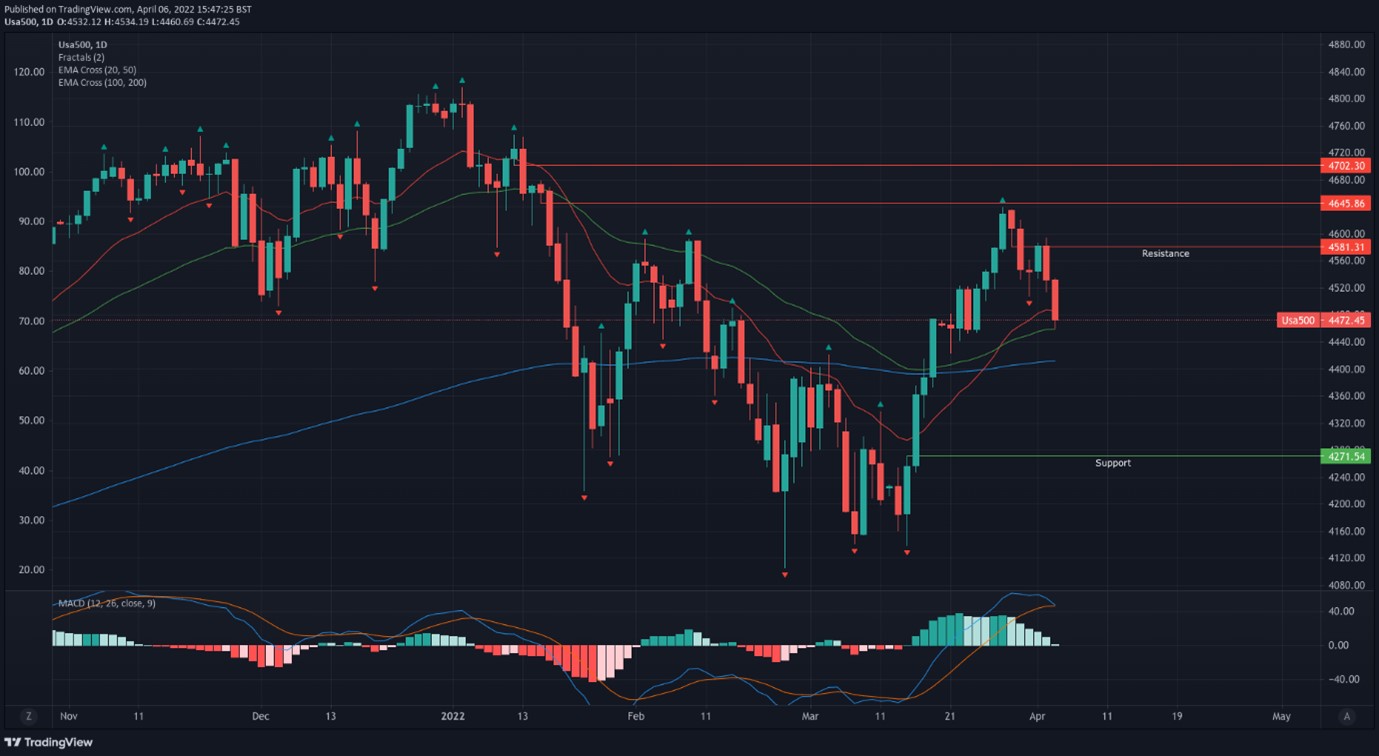 The S&P500 has dropped into the daily moving averages ahead of the FOMC meeting minutes that get delivered tonight. At the previous FOMC meeting they raised rates by 25bps to 0.25-0.50%, as the market had expected. There was one dissenter in Bullard who wanted the committee to raise by a larger 50bps move.

According to consensus, the Federal Funds Rate (FFR) will rise to 1.75-2.00% by 2022, with rates rising to 2.75-3.00% the following year. Ukraine’s situation was cited as a reason for forecasting higher inflation in the short term. While the 2022 growth forecast was trimmed. It’s all about cooling the economy by raising rates. I’d rather they concentrated on dropping inflation with increasing oil production and easing supply chain disruptions.

Now that the Fed are in a rate hike cycle, there is the question of being able to afford to pay the interest payments on the reserve balance they hold. Yes, they could magic up the money and just pay, but Congress would not be best pleased with this. Just as they would not be pleased if the Fed decided they couldn’t pay their interest payments to the US Treasury. However, Fed chair Powell suggested that excellent progress had been made in discussions on the balance sheet, and the Fed could finalise plans for reductions as soon as the May meeting. He also said it could look very similar to its previous balance sheet reduction, but faster, whilst assuring that the Fed would be mindful of the broader financial context and would avoid adding to uncertainty. During the last balance sheet reduction phase, the Fed were on autopilot and actually broke the monetary system by removing too many reserves, which meant that the commercial banks Supplementary Leverage Ratios were too low, and they had to scramble for non-existent collateral which made the repo markets spike high.

Powell says the FOMC can move rates in 50bps increments if that’s needed to control inflation and implied that this could happen at a meeting or meetings soon, meaning more than one 50bps move is possible this year; this is a radical change of tone from the FOMC meeting, where he seemed to advocate a “steady” approach. Money markets are pricing a 50bps rate hike in May with about 75% certainty based on the FOMC’s statement and comments from other Fed officials, who might also be open to a 50bps rate hike at the May meeting to combat high inflation. The comments made yesterday by Brainard, Williams etc. have left the market thinking that any chance of a soft landing with this rate hike cycle, balance sheet reduction combo are swiftly evaporating. This means the inversion of the yield curves that have been hinting at a coming recession takes on more weight. 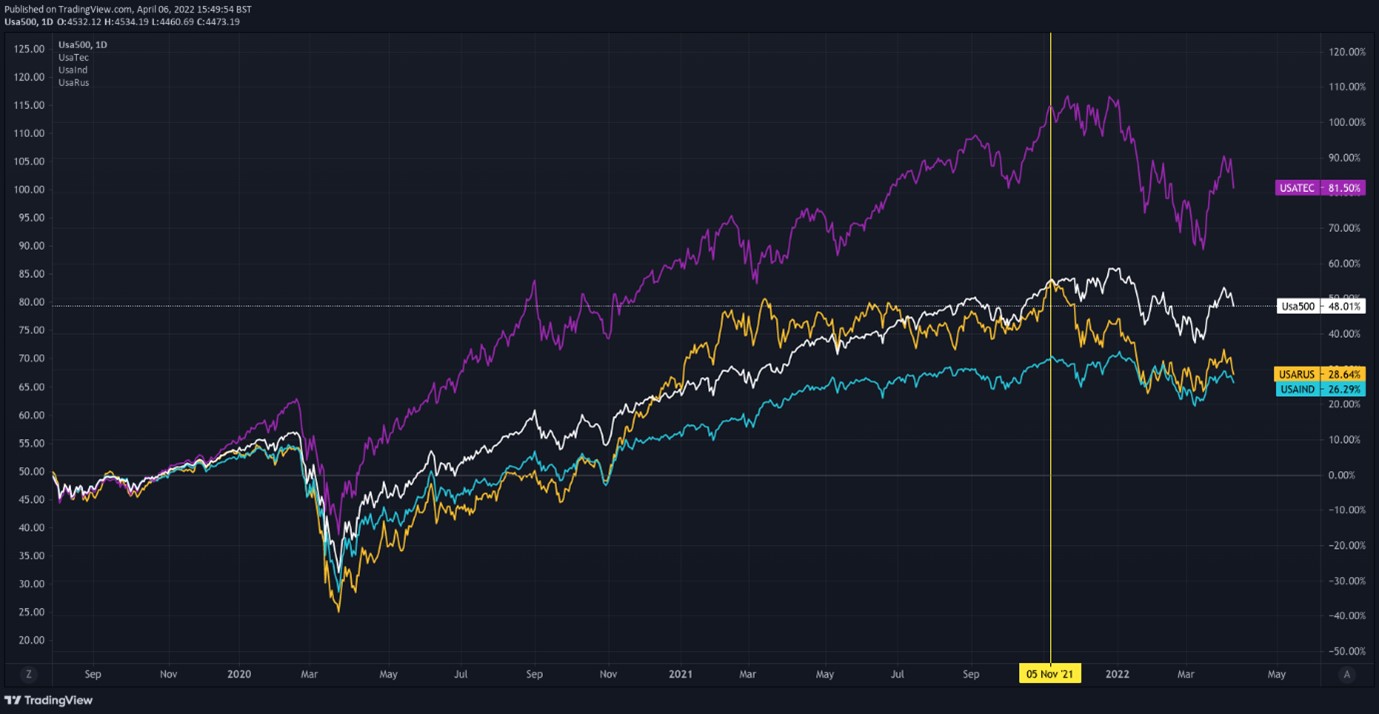 It is not only the yield curves that have been signalling problems in the markets. Since November 2021 the small-cap index, the Russel 2000 has been drifting lower, with a history of previously dragging down the large caps with it. 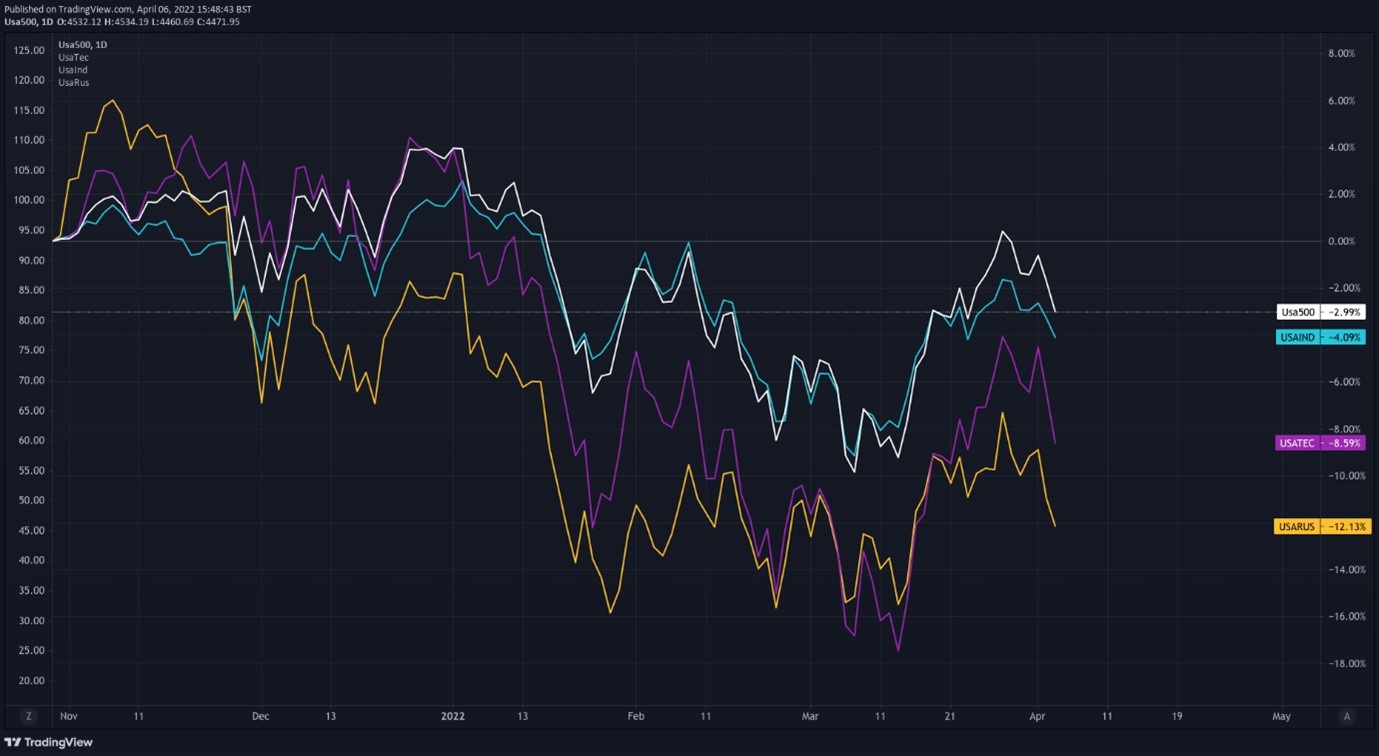 After yesterday’s comments from the Fed members the Russel and Nasdaq dropped hardest with a continuation into today’s trading. The Dow Jones Industrial Average and the S&P500 are very likely to follow suite. 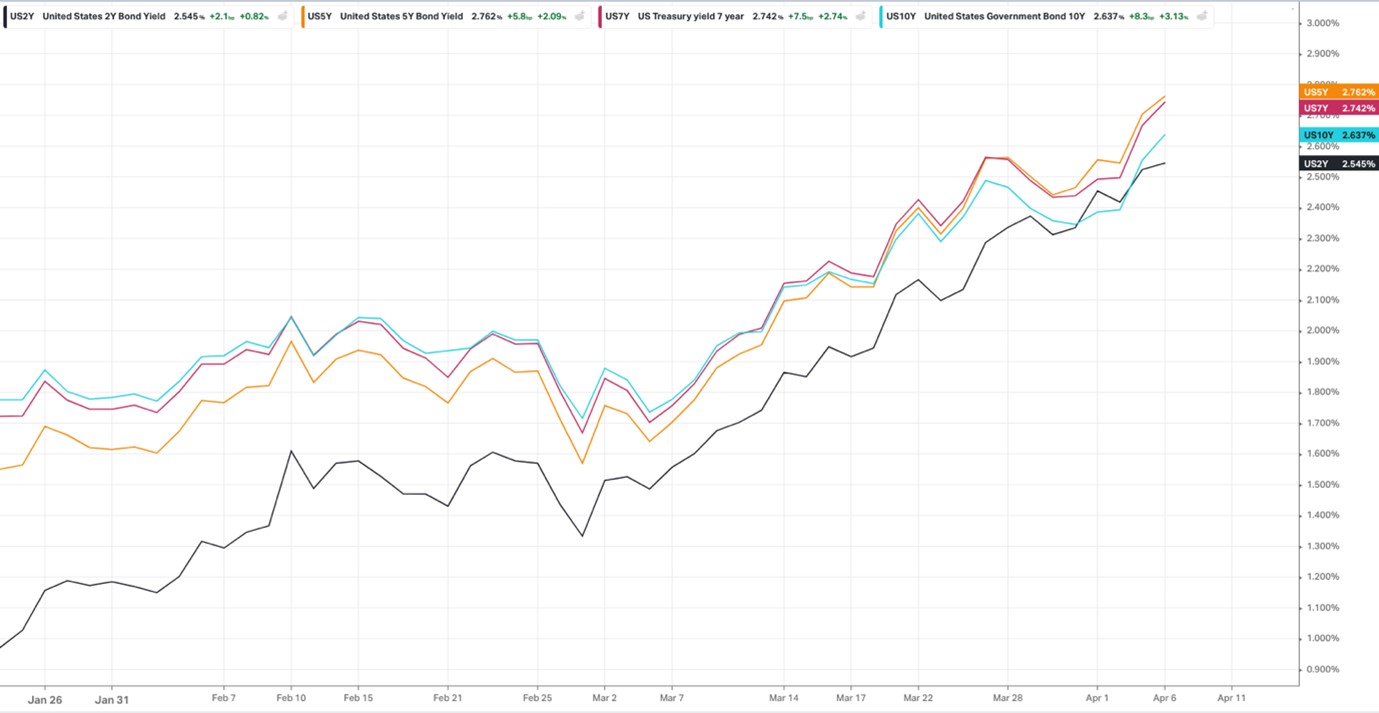 Since the December 2021 FOMC meeting the yield curves have been accelerating higher, but the moves from mid-March which showed the short-term yields which are most affected by the Fed rate hikes, moving above the benchmark 10-year which have become more worrisome. Investors are looking around to see whether it is just a monetary phenomenon or if there is another problem manifesting elsewhere. Some look to the ISM reports which show that a sharp decline in orders is occurring now, with inventory higher than new orders. This could be a signal that there are too many items on the shelves, with a lack of demand and dropping sentiment for the future. 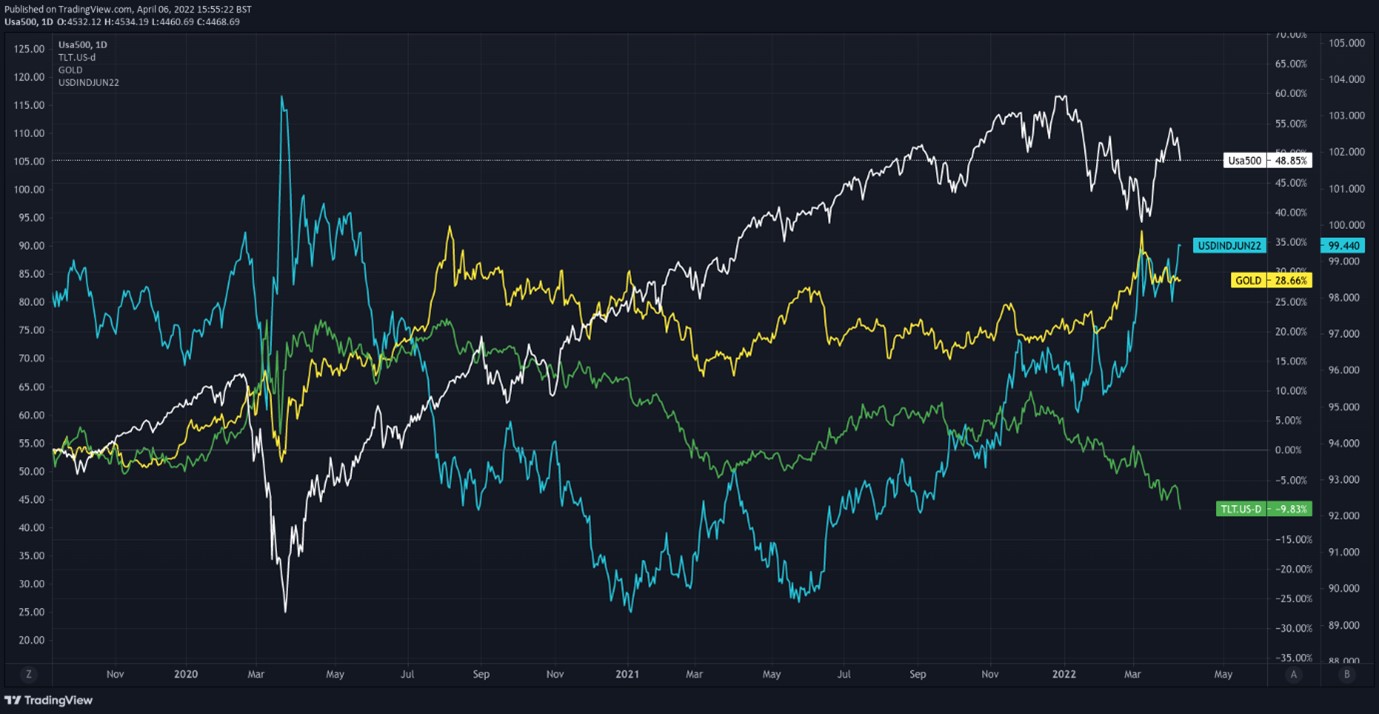 The rising yields have put pressure on the bond market, and we see that TLT the ETF which tracks the long bond has been dropping for some time now. A move out of the safety of bonds and into the US dollar accelerated at the end of 2021 and hasn’t really stopped, with DXY about to touch the psychological level of $100. Gold also hints at the lack of sustained demand for precious metals. Often called an inflation hedge the yellow metal is coming under pressure from real yields which are dropping due to rising inflation, rising US dollars and the disruptions in Ukraine being largely priced in.

The $10billion stimulus which was agreed to last week will go some way to helping bolster the economy as does increase lending from commercial banks. This year has also been a great year for US Treasury fiscal spending with March coming in at levels last seen in mid-2021. The fiscal flows will support the market and prevent a long-term decline. 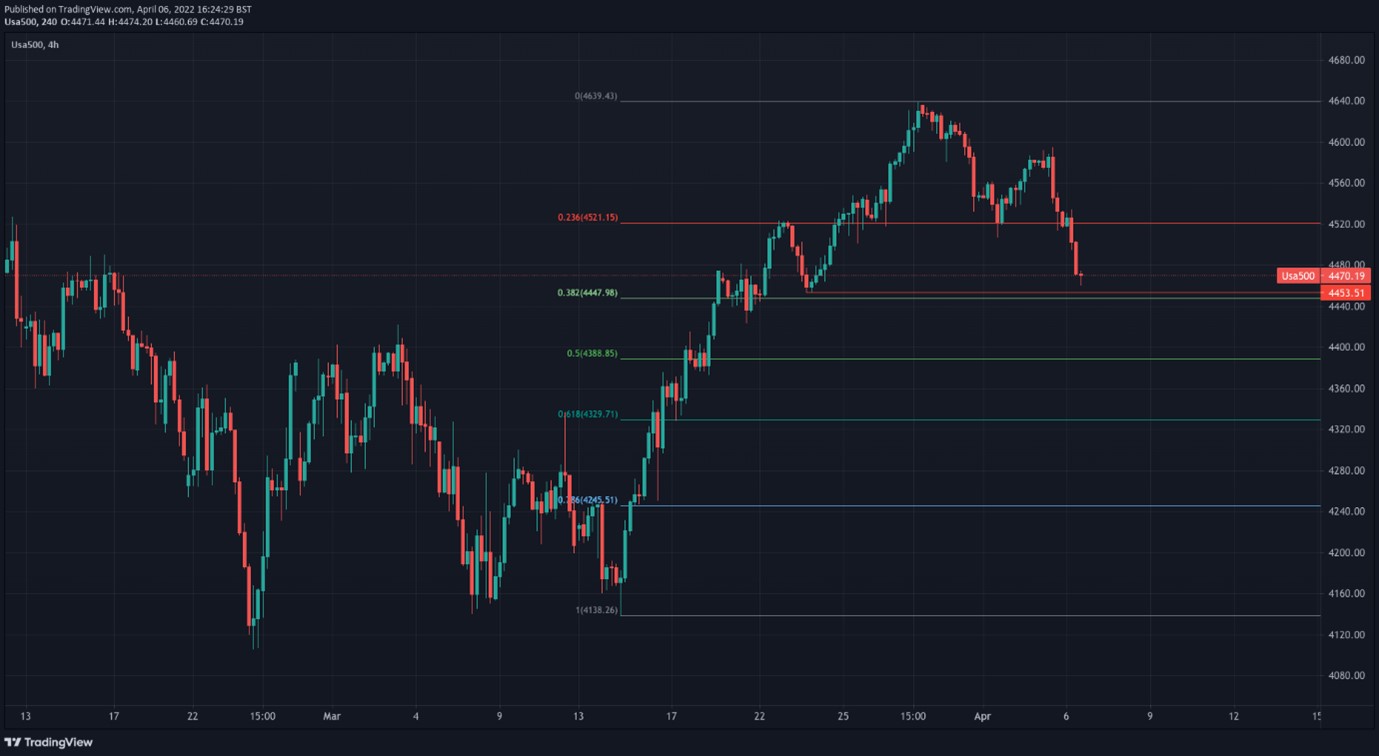 The bear market rally is over, as we’re breaking market structure to the downside. A lower swing low and a lower swing high, hints at a further decline and anyone wanting to go long would be better off waiting for a new higher high and higher low to print. For which we would currently have to wait for a break of 4600.

Assuming we’re going lower, the Fibonacci retracement tool highlights the 4400 as being value. Below that we get to the 61.8% retracement level just above 4320 and then the deep retrace at 4240. It is only when we get to the 50% that there is an area of clean imbalance, which could act as support. The next levels of imbalance are below the deep retracement levels, towards the pin bar that was the origin of the uptrend. Unfortunately, if we get that low the double bottom that printed in early to mid-March would also be a draw as there would be stops under there to provide liquidity, should the algos be inclined to need some liquidity.

Currently 4520 would be a place to look for a short as that level had acted as support, which should now be resistance. Above that would be the 4565, which would be great as you could put the SL above the swing high and have a very tight risk to reward.