327
SHARES
8.3k
VIEWS
Share on FacebookShare on TwitterShare on WhatsApp

Following yesterday’s risk off US session, when each of the three major US equity bourses (the S&P 500, the Dow and the Nasdaq 100) each dropped about 1.0%, we saw further risk off flows overnight and risk appetite this morning remains ropey. At the time of writing, E-mini S&P 500 futures are down a further 0.6% in pre-market trade, with futures currently trading around the 4370-mark, Hefty losses are also being seen in European markets, with the Stoxx 600 down about 1.9%, with the luxury and mining sectors taking a battering amid ongoing concerns about a growth slowdown and regulatory action in China and an ongoing collapse in industrial metal prices. For now, the S&P 500’s 50DMA at 4340 has held up as a solid area of support (this has been the case time and time again over the past 12 or so months).

Market commentators and analysts are citing a combination of factors as to why market sentiment has taken such a beating since yesterday’s US session and since the start of the week. Firstly, the tone of last night’s FOMC minutes was quite hawkish (as many expected to be the case); FOMC members largely agreed that the economy is moving closer to the point where than bank can start to wind down its QE buying, though this point has not been reached yet. Otherwise, FOMC members seemed pretty split on everything else, most importantly including on what the timing of this tapering of the QE programme could look like. Really, the minutes didn’t add anything to what we have already heard from a variety of FOMC speakers over the last few weeks; during which time they have expressed a variety of opinions on when the taper should be announced, when it should start and how quickly it should conclude. But the hawkish tone of the minutes appears to have made for bad optics, hence why it seems to be weighing on market sentiment. Elsewhere, market commentators continue to cite concerns about the impact that the global spread of the delta variant of Covid-19 will have on global growth prospects going forward, amid a recent string of economic data out of the US and China that signals that growth is already slowing in the world’s two most important economies.

Many equity investors will this morning be asking the question whether the move lower in stocks overdone? As noted above, pullbacks in the S&P 500 have presented great buying opportunities time and time again over the past 10 or so months. Each time these mini pullbacks have occurred, investors have been able to take confidence from 1) accelerating global vaccine rollouts, which provide “light at the end of the tunnel” with regards to the pandemic, 2) expectations of a continued healthy pace of global economic recovery and 3) expectations that monetary policy in major developed markets is set to remain highly accommodative. Is this time different? With regards to point number one about vaccines being the silver bullet in the fight against Covid-19, this by and largely remains the case – vaccines appear to have drastically reduced the link between Covid-19 infection and death in country’s with high vaccination rates (like the UK and Israel) and vaccines still seem to work just as well against the Covid-19 delta variant.

Points 2) and 3) are where things are starting to look a little less positive; the pace of the global economic recovery is slowing, led by China (which is now growing below its pre-Covid-19 trend) and seemingly now being felt in the US. The global spread of the delta variant (mostly amongst the unvaccinated in countries with low vaccination rates) is also weighing on the global economy. Meanwhile, central banks have globally begun to remove, or signal the incoming removal, of extra-ordinary monetary stimulus measures; EM central banks in Latin America and Central Europe are leading the charge with rate hikes, but major G10 central banks are also moving towards the removal of stimulus. All of the above suggests the risk that this correction in equities may have some further room to run. However, when we see global delta variant infections peak and start to drop off and if economic data holds up better than expected in Q4, this should limit any losses.

Looking at FX markets; the market’s risk off sentiment is evident when looking at the performance of major G10 currencies this morning, with safe haven currencies, including the US dollar (DXY +0.3%), JPY (USDJPY -0.1%) and CHF (USDCHF -0.1%) are the best performers, while the most risk sensitive G10 currencies, which include NOK (USDNOK +1.2%), AUD (AUDUSD -0.9%), CAD (USDCAD +0.7%) and NZD (NZDUSD -0.7%), are the worst performers. Given is status as a funding currency, which hands it some safe haven characteristics, the euro (EURUSD -0.2%) is holding up comparatively well this morning, while GBPUSD is down about 0.5%. This morning’s risk off moves have seen the Dollar Index (DXY) hit a nine-month high, with the index at one point hitting the 93.50 mark. This pushed the likes of EURUSD, AUDUSD and NZDUSD to fresh nine months lows under the key 1.1700 handle, the 0.7200 level and back towards 0.6800 respectively. Better than expected Australian jobs data for the month of July (the economy posted a surprise but very small gain in employment) has failed to provide much of a lift to AUD, likely given the fact that job losses are expected to be very high in August, with lockdowns having been widened and tightened. Risk off sentiment is also evident in a continued fall in global bond yields; despite talk of a hawkish Fed (which would normally push yields higher), US 10-year yields have dropped back towards two-week lows under the 1.25% mark.

There are a few important US data points at 1330BST; the latest weekly jobless claims report and the August Philly Fed Manufacturing survey. Those hoping for a recovery in risk appetite will hope that both data releases come in better than expected; strong jobless claims data would underpin confidence in the US economic recovery (as a strong labour market is good for growth), while a strong Philly Fed survey could ease fears triggered at the start of the week by the weak NY Fed survey about a slowdown in US growth at the start of this month. The preliminary August Markit PMI survey, out tomorrow at 1445BST, will be the main data point for US markets for the rest of the week, however. Otherwise, expect sentiment to continue to take its cue from news flow regarding the pandemic and FOMC. 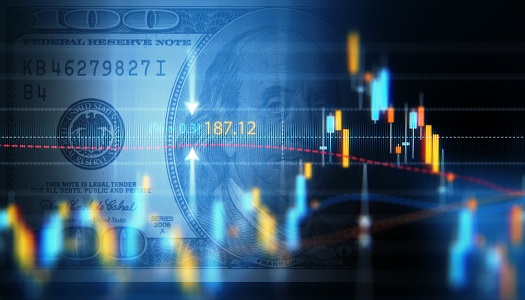