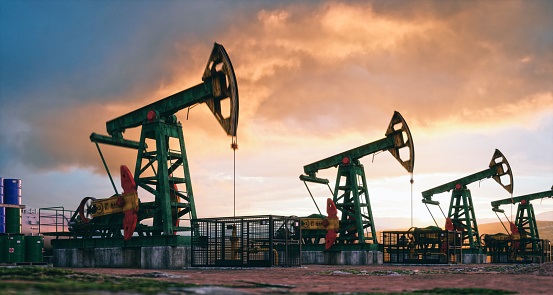 329
SHARES
8.8k
VIEWS
Share on FacebookShare on TwitterShare on WhatsApp 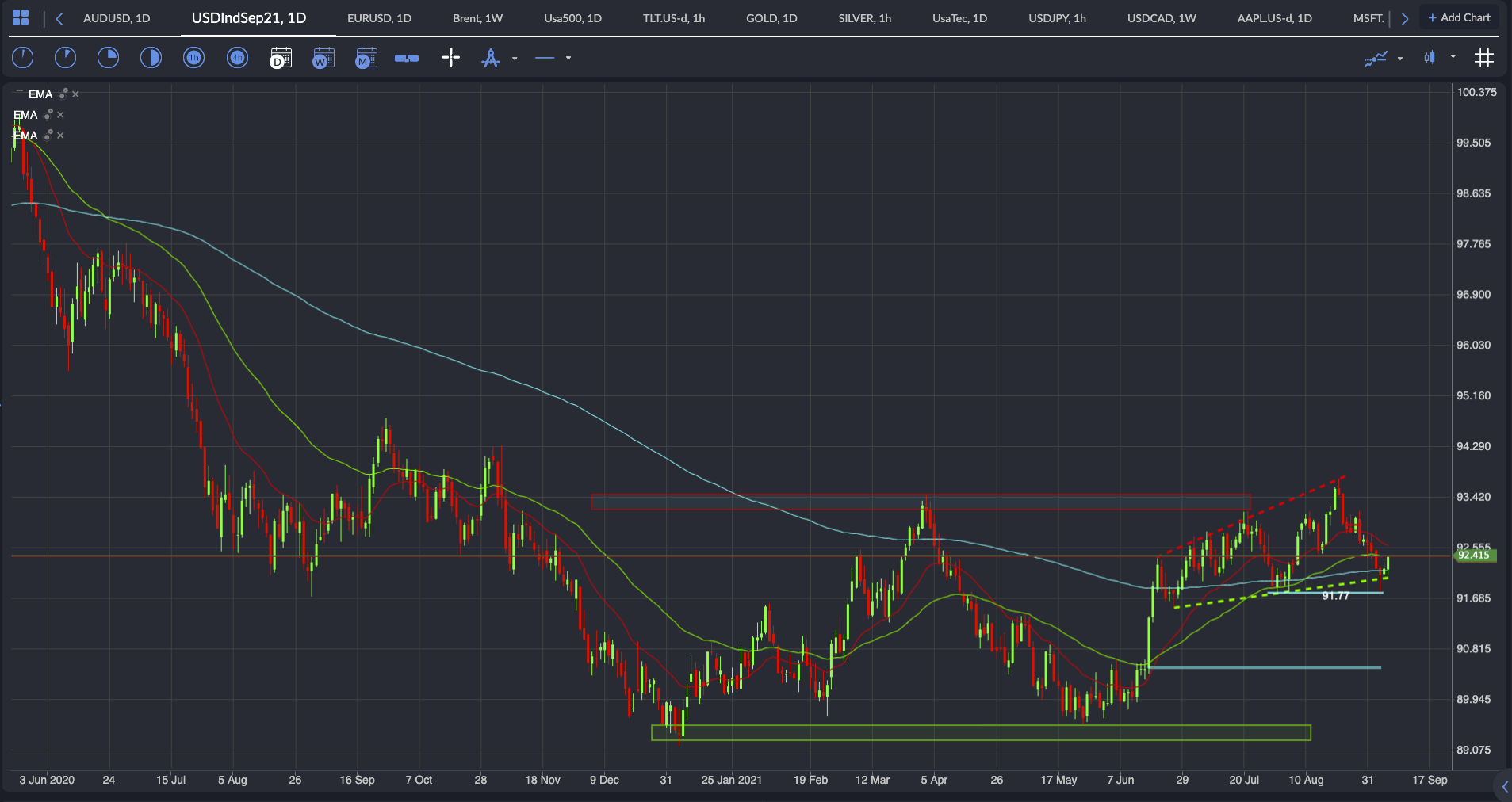 There is currently a real supply and demand two-way trade going on in the oil markets, as we have different macro fundamentals being influenced by the covid-19 delta variant, storm damage from Ida, the US dollar moves, and increased oil supply being pumped by OPEC+.

The US dollar index is in a state of flux as technically it is within a bullish trend, though currently in a corrective phase. With US dollar fundamentals now in a state of confusion as traders do not know whether the Fed can tighten monetary policy following on from the big miss in the NFP numbers or whether the increasing wage inflation will be enough for the economy hawks to press on. A weakening US dollar has had a positive influence on the price of oil in the past, though this will become less of a factor in the future as countries move away from the Petro-dollar. At the start of September, it was reported that Gazprom Neft, the oil arm of Russian gas giant Gazprom, had started to move away from the US dollar to China’s yuan in settlements for fuelling planes in China.

In the last 24 hours, the state oil group Saudi Aramco notified its customers that it will reduce October official selling prices for all crude grades sold to Asia, (which is its biggest buying region), by at least $1 a barrel, after China, Japan and other industrialised nations reported weakening consumption. Over the last few months Chinese economic data has been on the downturn as the delta variant continues to find ways to spread across the nation and disrupt supply chains and manufacturing. There was some good news this morning from China as their exports & imports data beat expectations with a 25.6% rise year-on-year to a record USD 294.32 billion in August 2021.

Nearer to home sentiment data from Europe today was downbeat but recent GDP figures show that the eurozone expanded by 2.2% in April-June, up from a first estimate of 2%. Traders look to a large trading block like Europe, which is still on a path of recovery as a good sign for Oil demand, but it is solely reliant on the success of the current vaccinations to keep the coronavirus manageable so we can avoid further lockdowns.

OPEC+, agreed early this year to maintain the increased output by 400,000 barrels per day (bpd) each month between August and December but chose to ignore the USA’s calls for a further increase in production. At the end of August Hurricane Ida ripped through the Gulf of Mexico causing the oil and gas industry there to shut down. So far, the storm has caused huge production disruptions with the cumulative outage since Aug 27 now at 17.8m barrels, running at 1.5mln barrels per day. With over 80% of oil output and 84% of natural gas output in the Gulf of Mexico still offline a week after Ida struck. The latest rig count from Bakers Hughes showed the biggest drop in online rigs since June 2020 with a total of 99 oil and gas production platforms remaining evacuated, but down from the 288 originally evacuated.

OPEC+ are adding 12 million bpd but the short fall is a minimum of 6 million bpd, due to the losses from Ida. Earlier, the US Department of Energy said five oil refineries in Louisiana remained shut over Labour Day, which make up about 6% of the total US operable refining capacity. 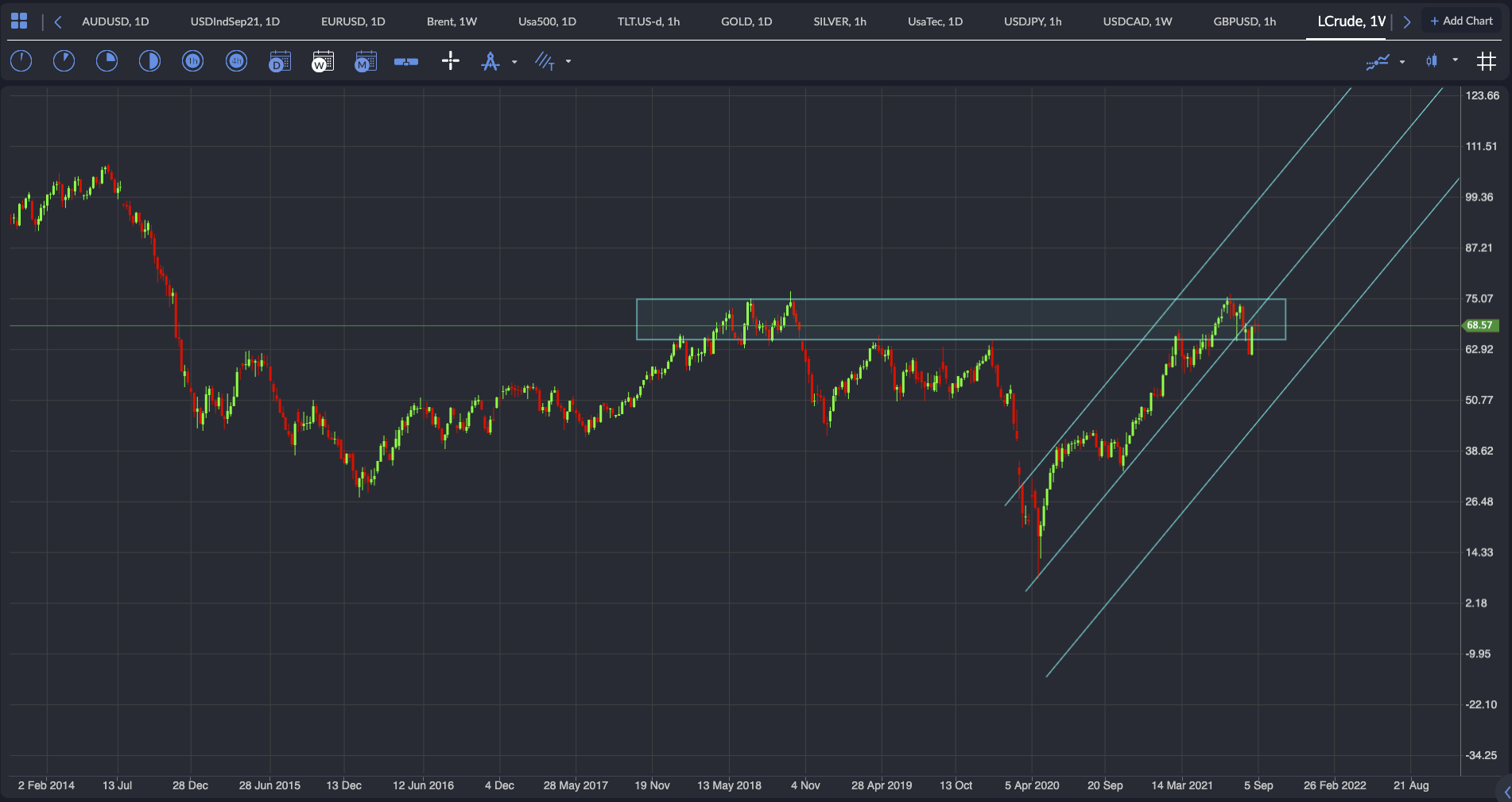 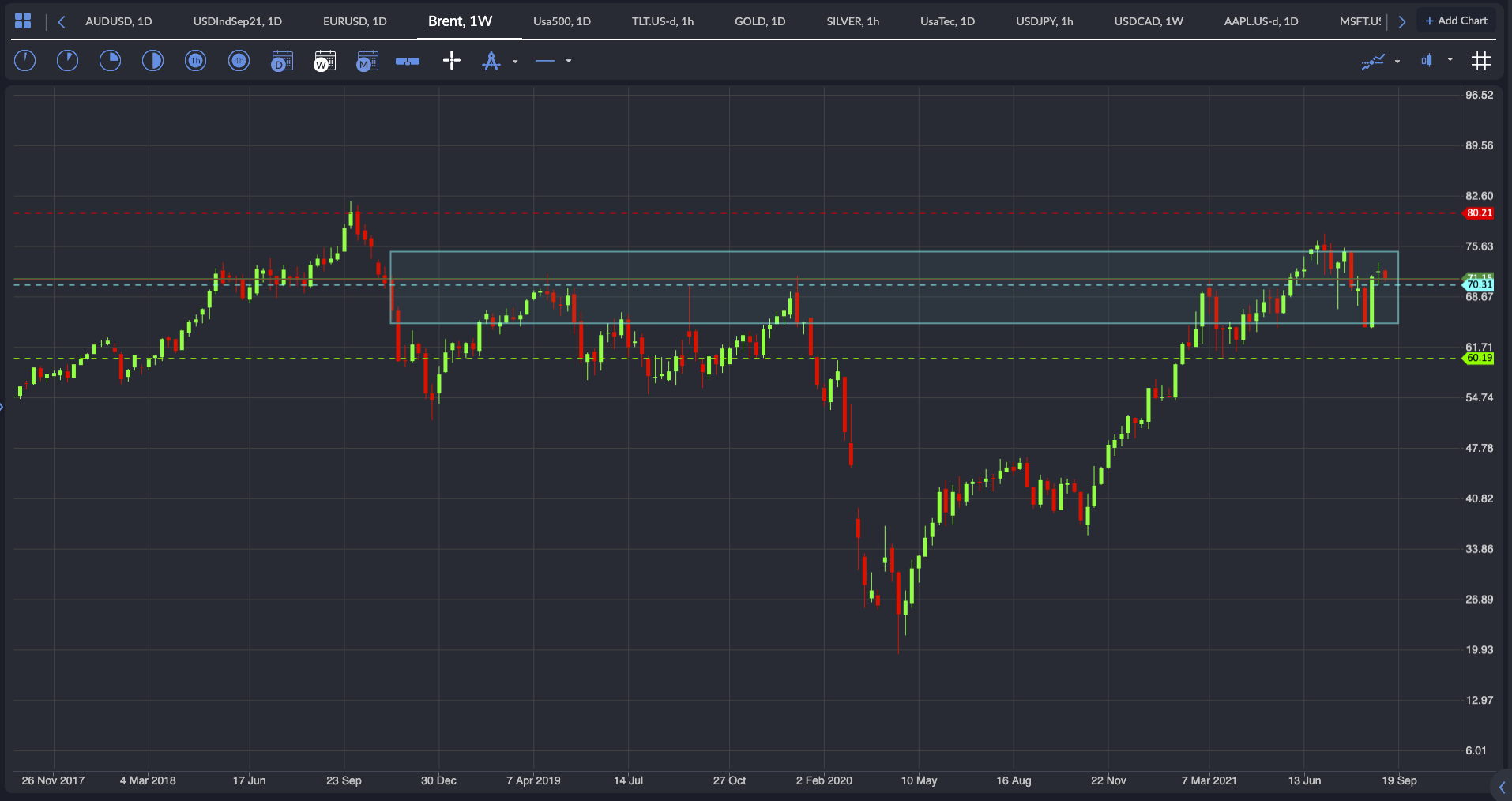 The two main contracts that we follow Brent crude and West Texas Intermediate are showing that on a weekly chart we are currently trading at the top of an extended bull run from the pandemic lows and back to pre-pandemic prices.

The president of Russia’s second largest oil producer Lukoil, Vagit Alekperov, was reported to say an oil price of $65-$75 is “comfortable” for consumers and that OPEC+ is striving to maintain that price range. Now, when someone like that tells you the price that they are comfortable with and then gives you a high and low range, we should take notice and see if there is a way to technically create a trade set-up. Fundamentally, we can see that the way in which OPEC+ have maintained discipline during these rising prices and not opened the flood gates shows that they have a $ figure per barrel in mind rather than just flooding the market and creating an oversupply. 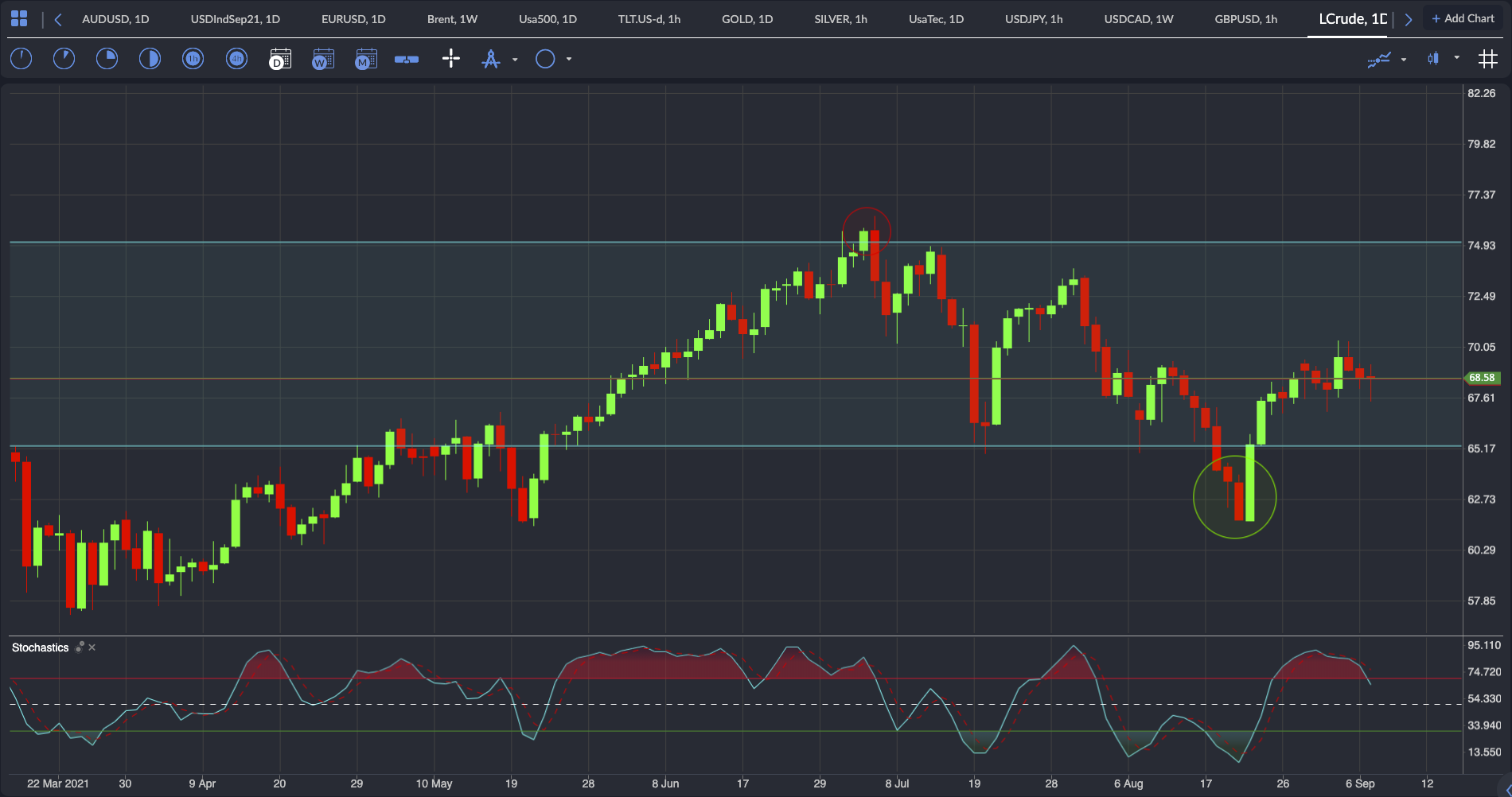 Assuming a crude price of $65 is the lower bound, we can see that recently on a daily chart when the price dipped below it was bought. And prior to that when price was above $75 it had been offered. The Commitment of Traders report shows that when price peaked just below $77 on the oil futures and started to roll over, the producers started to reduce their short position. If we get back to that level again it will be worth noting which way, they trade as a signal to further possible price movements.

Using the Stochastic oscillator (10,3,3) as a visual reference for when the oil contract has been oversold or overbought on the daily time frame, we can wait for the indicator and price levels to show confluence around the $65 or $75 level. On the above daily chart, the trigger would come following the close of the large engulfing candle both to the downside and then to the upside.

AUDUSD stalls at the daily 200 ema, with the returning US traders bidding up the US dollar too 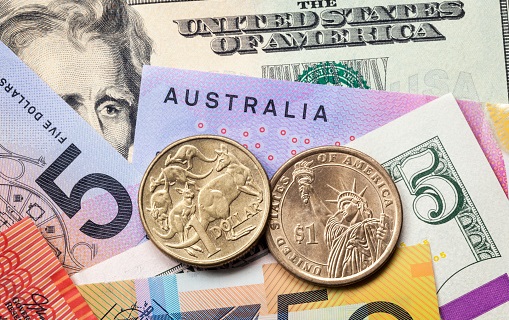 AUDUSD stalls at the daily 200 ema, with the returning US traders bidding up the US dollar too