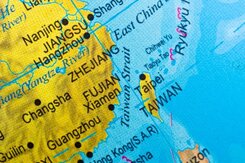 449
SHARES
15.1k
VIEWS
Share on FacebookShare on TwitterShare on WhatsApp

Broader market sentiment remains fragile during the US session after China announced more military drills around Taiwan as the island’s president met with members of a new US congressional delegation on Monday.

The media in Taiwan has shown the delegation arriving for the talks, but details of the meeting were not immediately released. This has caused tension to ratchet up between the US and China again.

Markets sold off broadly recently after US House Speaker Nancy Pelosi’s trip to Taiwan, which prompted days of threatening military exercises by China, including the firing of missiles over the island and into the Taiwan Strait.

Traders and investors remain on edge as China regards formal contacts between United States and politicians and the island’s government as support for its independence from Beijing.

European stocks have reacted better than United States stocks with most of the indices posting gains. On the European close the Stoxx 600 closed up +0.25%, the German DAX also close very marginally in plus with a +0.10% gain.

Energy issues in Europe did not weigh on stocks, but that certainly weighed on the euro currency. The EURUSD pair fell by nearly 1 percent today as investors leave Europe on soaring energy costs.

In terms of the other major currency pairs, the British pound has lost ground across the US dollar as well, while risk-on currencies, such as the Australian dollar have also lost ground.

Aside from the energy crisis it is also noticeable that the US dollar is stronger across the board today. This could be due to safe haven status of the United States dollar during times of geo-political uncertainty.

I think the big loser of the day are oil and gold. Oil prices have dropped sharply, with both crude and Brent suffering losses over 3%. This has not helped the “peak inflation” trade.

Gold has been noticeably sold from the $1,800 level again. This is a resistance area the yellow metal has struggled with recently that bulls need to clear for further upside towards the $1,840 level.