392
SHARES
9.3k
VIEWS
Share on FacebookShare on TwitterShare on WhatsApp 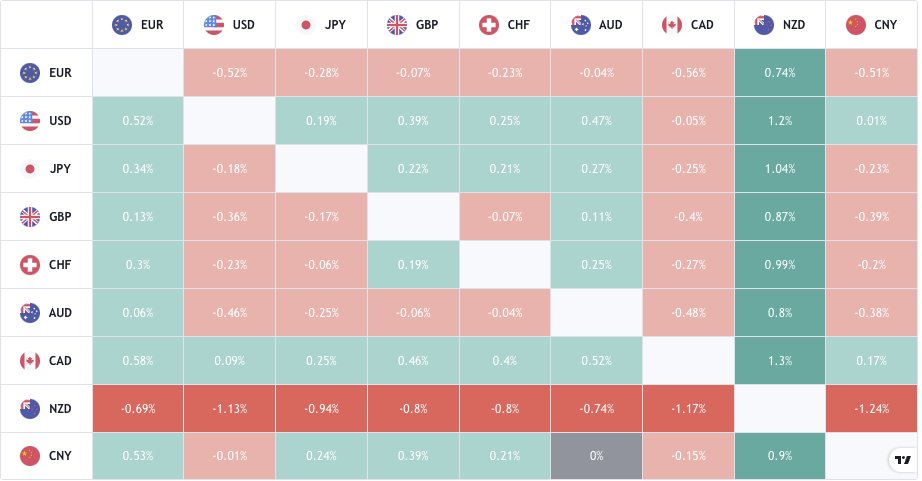 The forex heatmap shows how well the Canadian dollar is doing against the New Zealand dollar. The two commodity-linked currencies are rarely that at odds. This morning the RBNZ raised rates by 25bps, causing the market to sell the Kiwi hard. A rise in Treasury yields has led to a bid for the US dollar and this is weighing on the EURUSD as the two economies diverge in monetary policy.

Brent has been trading within a tight range after the energy complex got a boost after yesterday’s coordinated reserve releases. The rising dollar on the back of US economic data today may be the only thing keeping Brent from making new highs currently as the move yesterday led by the USA will do little to add to the supplies of inventories on a global scale and the OPEC+ members are considering not increasing their output in what may be an act of defiance. The DXY is trading just under the $96.90 level and within the balance area from June 2020, so we could see some resistance here. But that may depend on how the market reads the FOMC meeting minutes tonight.

According to today’s US weekly jobless claims data, the number dropped to a 52-year low, which is great news for the FOMC, which are basically waiting for the jobs data to catch up with the inflation data. According to the US Department of Labour, initial jobless claims fell by 71,000 to 199,000 for the week ending November 20, the lowest level since November 15, 1969. This is the lowest point since March 14, 2020, and down by 21,000 over the last week’s revised average.

After the Department of Labour reported that jobless claims dropped to the lowest level in decades, Treasury yields rose amid concerns that the Federal Reserve’s monetary policy will tighten sooner than expected due to improving employment figures. In addition to the better-than-expected IJC, the PCE price index was up 0.6% on a monthly basis and 5% on an annual basis. In September, the Core index was 0.4% higher than August but was up 4.1% over the previous year. The Federal Reserve view the figure as an important inflation indicator and is used in determining monetary policy. Despite higher wage inflation than normal, San Francisco Federal Reserve President Mary Daly said that there has been no wage-price spiral.

Daly also noted that it is too early to predict that workers who left the workforce during the pandemic won’t return and that she would not be surprised if there are one or even two rate hikes in 2022.

In its second estimate, the Bureau of Economic Analysis reported that the US gross domestic product (GDP) rose by an annualized rate of 2.1% during the third quarter, which was below market expectations. Without massive fiscal spending, the USA is not going back to 6.7% GDP anytime soon. But the reduction in the trade balance and increased private spending may help lift GDP over the coming fiscal year.

78% of the traders on the ActivTrader platform are feeling a lot of pain as they get squeezed out of their long positioning. Around 1.1145 may offer a level to get a bounce but the bulk of volume and possible buyers is all the way down below 1.0950 to 1.0670. If the market thinks the Fed are raising rates twice this coming year and the ECB are signalling that they won’t, the euro is coming down a lot harder and a lot quicker. Which will be great for German exporters and could stimulate the Euro Area.

Another group of traders in pain are the USDJPY short selling cohort. 88% are short as the weekly candle pushes on higher as a bull flag pattern suggest many weeks ago that it would.

To me seeing the USDJPY higher today makes perfect sense, as it follows the US benchmark yields, and the yen suffers when oil prices go higher. The 118.00 handle looks like the most obvious target, so assuming the rates, inflation, narrative carries on we could be there by the end of 2021.