Grains pull back from recent highs but could test significant support 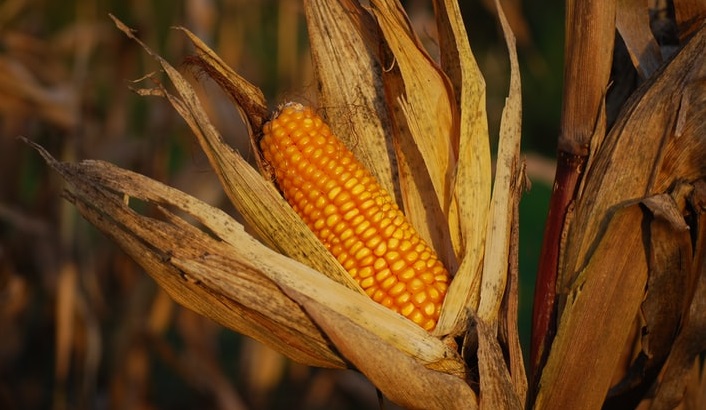 367
SHARES
9.4k
VIEWS
Share on FacebookShare on TwitterShare on WhatsApp 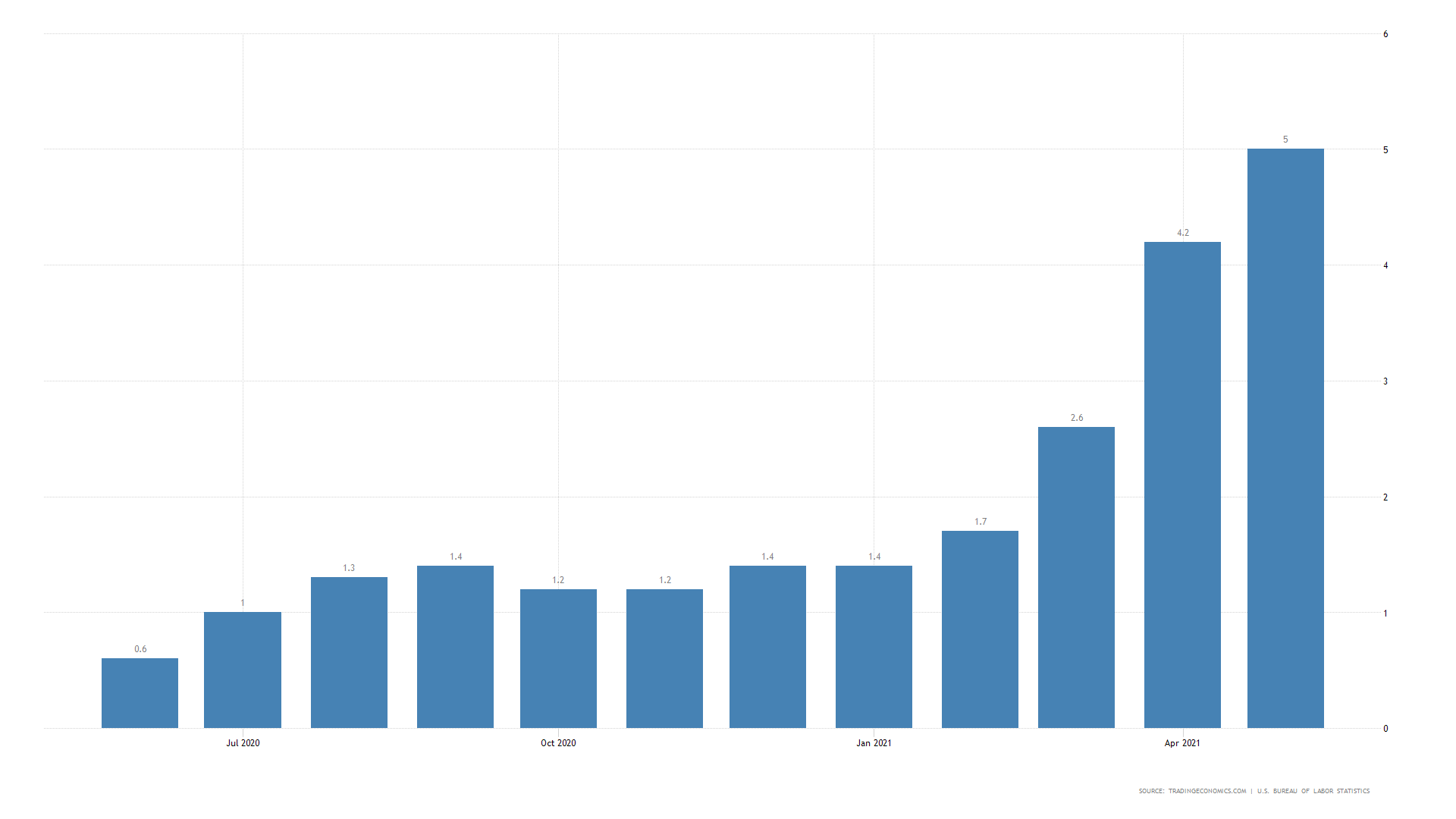 The price of fuel has been rising and we now have WTI steady around the $71 per barrel price level, which is such a difference to a year ago amidst the height of the global pandemic. As we approach driving season in the US and Europe it will be interesting to see whether the demand can increase to drain some of the inventory that is now available.

Demand in gasoline and distillates in the USA has not being rising quick enough to drain supply so the transitory inflation could be just as Jerome Powell says it is, and maybe we will see lower energy costs, though that is no guarantee for lower food prices. The US year on year inflation rate accelerated to 5% in May of 2021 from 4.2% in April and above market forecasts of 4.7%. As fuel prices increase, the cost of everything goes up as we need fuel to help make, grow and transport the goods. 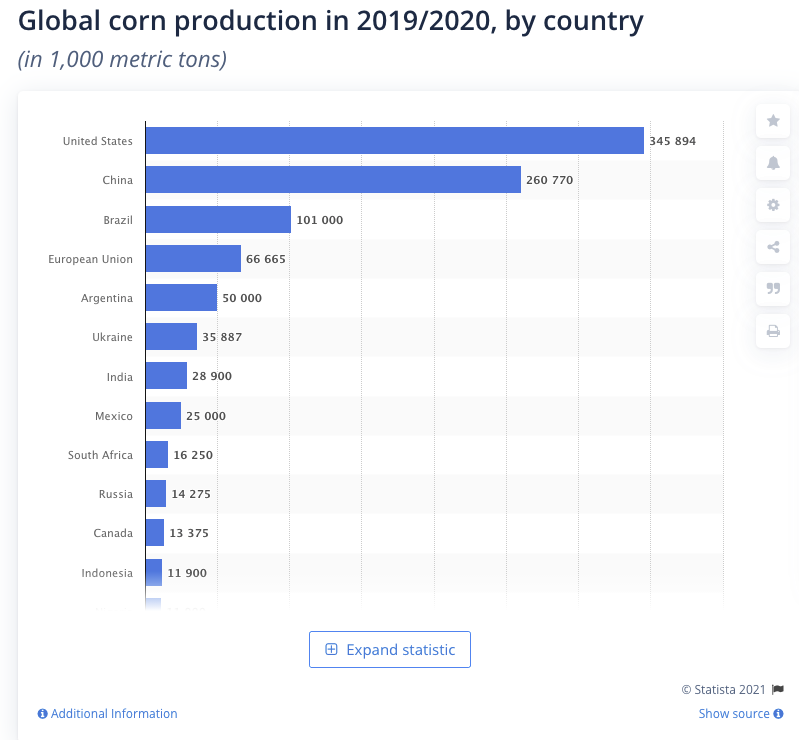 Corn and grain crops have also been in the news as higher oil prices push food inflation higher. The largest growers are the USA, Brazil and the Ukraine and the largest global importer is China. In 2016, the United States exported around 56.5 million metric tons of corn, while Japan and Mexico were the leading buyers of U.S. corn in 2015. During the Trump administration we got to learn a lot more about how the USA and global economies worked in more detail. Trade tariffs and trade wars were the dominant themes as the USA tried to get a better deal from the Chinese authorities.

In May 2021 corn prices hit a new higher high but then over the last 6 weeks we have seen a correction occur. The prices of commodities are very sensitive to inflation, the US dollar, plus supply and demand so when we look at a chart of corn, we also need to know more about the macroeconomics. 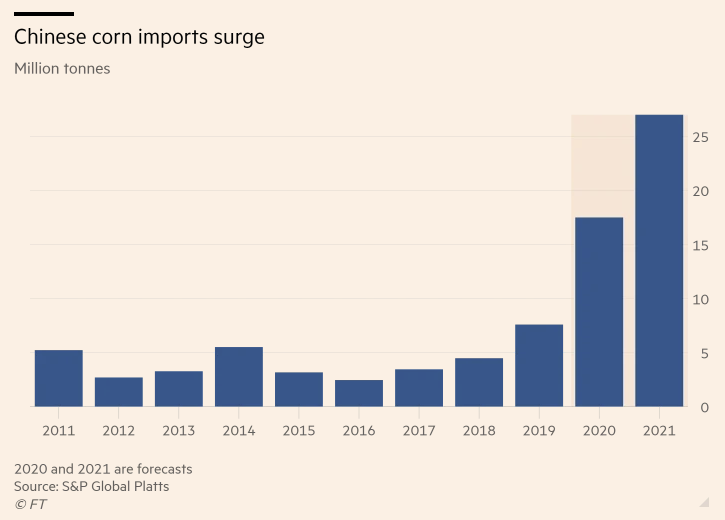 Grain supply has been dented in the recent months by a Brazilian drought and by a Chinese crop failure, making higher prices in these grain commodities likely to stay higher. Three typhoons tore through China’s corn belt of the provinces of Heilongjiang, Jilin, Liaoning, and the Inner Mongolia region last autumn. The storms flattened plants and flooded fields just as the corn crop reached maturity.

“Flattened crops are not equal to no harvest, and you might recover some output if the crops get handled properly later,” said Meng Jinhui, senior analyst with Shengda Futures

“But the cost of harvest will rise and there is increasing risk that the corn crops would lose their test weight while getting mouldy,” said Meng, who gave an initial estimate that corn output in the north-eastern region will drop by about 5 million tonnes.

With Chinese national output decreasing, China is expected to import more from major suppliers like the United States. Though eyes are on the weather in the USA as the National Weather Service forecast shows above-normal rains and average temperatures across the Midwest in a two-week range. The recent weather predictions come after a recent heat wave could be detrimental to crop quality and conditions could deteriorate quicker than expected. 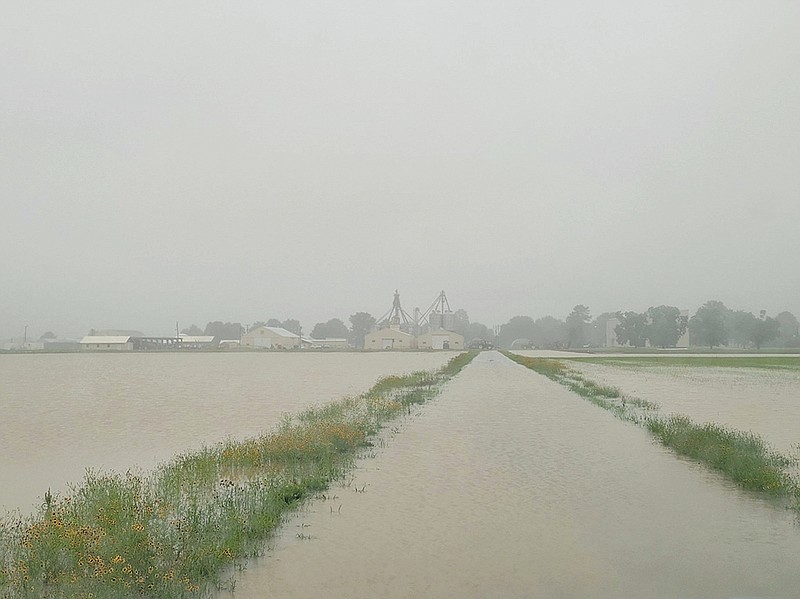 Desha County, along with most of the Delta region and more than two-thirds of the counties in Arkansas, received extraordinary amounts of rain over the weekend and well into this week. “A week ago, we were needing the rain,” said John Farabough, Desha County agricultural extension agent. “We went from powder-dry dust to four inches of standing water, minimum, everywhere.”

The balance between too much sun and not enough rain is obviously unpredictable at best and totally random at worst, so the supply and demand issues are going to be dominant. Global food shortages are going to keep occurring and global environmental changes are going to have massive changes to how and where we farm food.

The recent dip in the prices of Corn and Wheat were probably due to the rains arriving after such a dry spell and in terms of chart analysis, the prices are looking likely to test daily support levels. 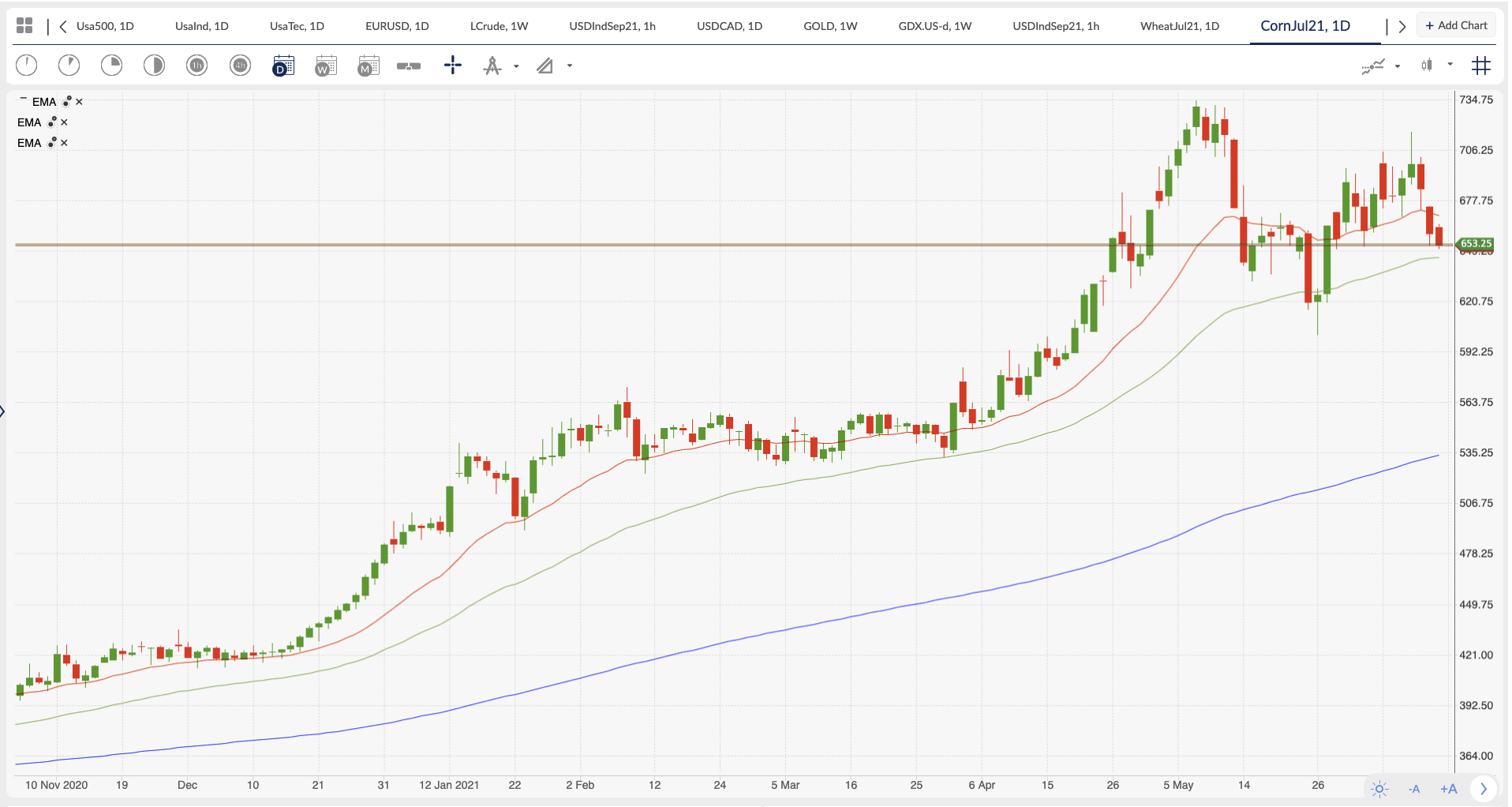 Corn has once again traded under the daily 20 ema but is likely to find support at the 50 ema around 643.00. Should there be a significant move to the downside and the May swing low get swept, the 200 ema on the daily chart could be the next target. But that is the worst-case scenario for the bulls. Generally, crop quality and quantity are likely not to be at their peak until next year after a couple of growing seasons have enabled everyone to replenish their stocks. 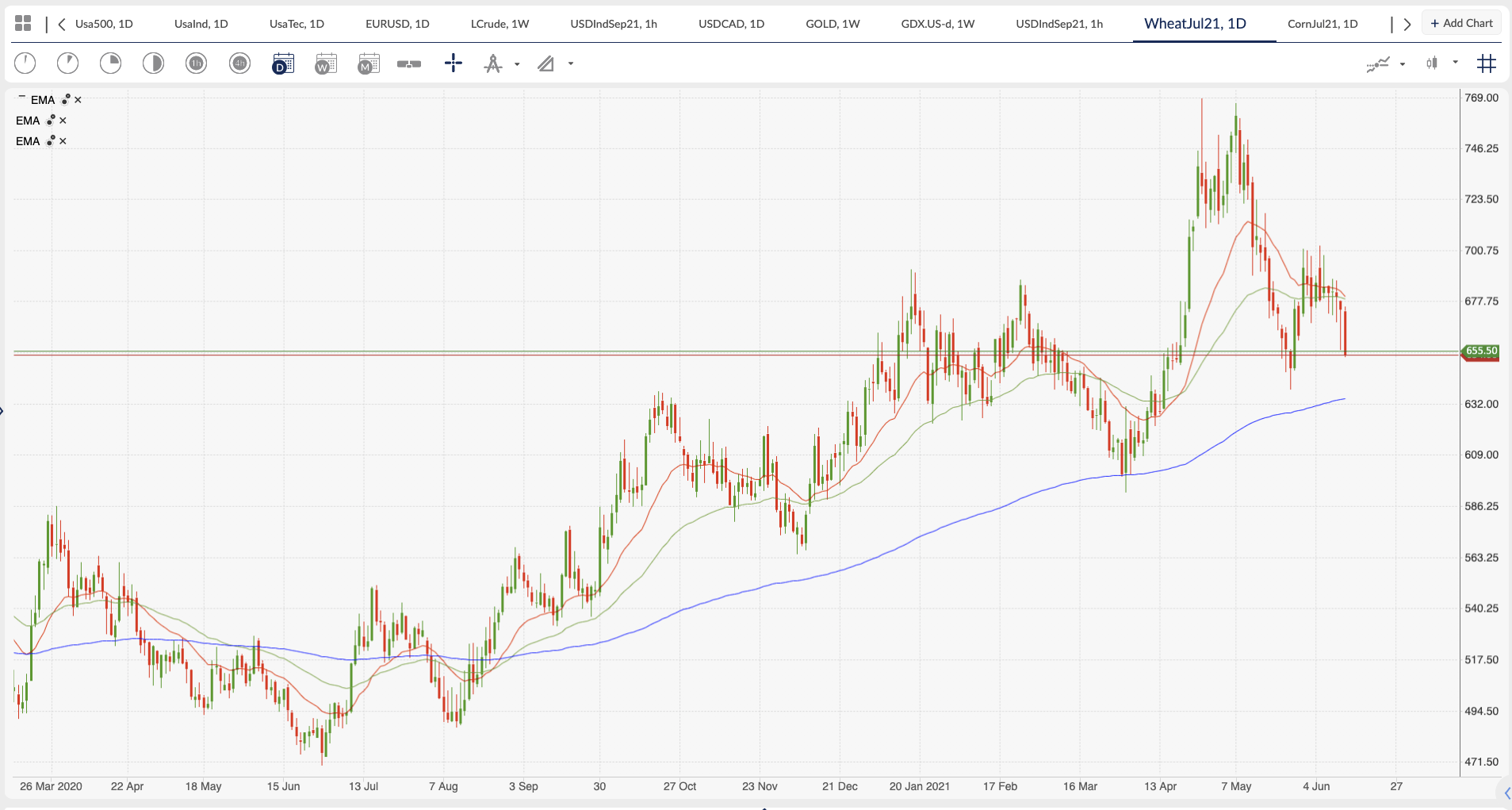 Where corn crops fail, wheat is often used as a substitute animal feed, so this has also recently been trading at its highs. The correction from 769.00 printed in late April does look like a 3 wave move to the downside and we are about to run into support at the daily 200 ema around the 632.00 level. If the late May swing low gets swept, this could be a signal of increased selling pressure and may be prices open up down to 590.00-595.00 and the March 2021 swing low.

Lower US dollar prices would be beneficial to the grain prices, and this could be achieved post the FOMC meeting tomorrow. If the summer crops fail, I will be looking for a bullish reversal in the corn and wheat contracts, but I would want to see a break above a significant swing high and then a retest of that breakout level. These charts are driven by fundamentals, so the technical analysis is mainly for timings and risk management. Using the previous major daily swing low in an uptrend as a place to park your stop could allow you to catch the meat of the move. 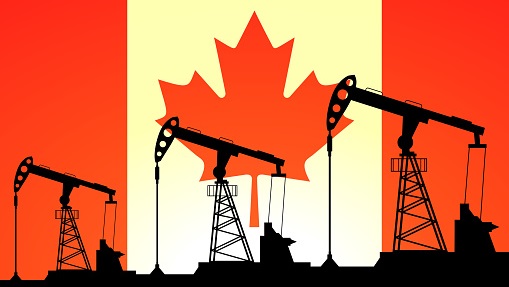