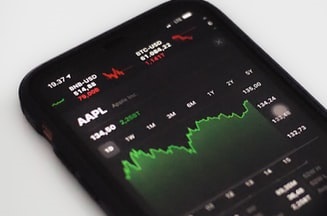 369
SHARES
9.1k
VIEWS
Share on FacebookShare on TwitterShare on WhatsApp

The two heatmaps of the S&P500 technology sector and the Nasdaq 100 have a distinct large red block, which happens to be Apple Inc. (AAPL). It could be to do with a higher inflation reading today from the US CPI report which will affect the profits of these high valuation companies, but today’s news is full of Apple’s feud with Epic Games which pivots on whether the Apple Store will have to allow 3rd party software onto the platform. Apple says this will open vulnerabilities and make the iPhone etc. more susceptible to hackers. They are also having to deal with logistical problems caused by manufacturing bottlenecks following reports that Apple may cut iPhone 13 production targets due to the ongoing global shortage of computer chips.

Apple had expected to produce 90 million iPhones in the last quarter of 2021 but is now being forced to inform partners that sales will be lowered by as many as 10 million units.

Apple is one of the largest chip purchasers in the world, as well as the automotive industry and video game console manufacturers. Tim Cook, Apple’s CEO, warned shareholders in July that the shortage of semiconductors might affect sales of iPhones and iPads so any new rumours speaking to this are going to affect investors’ confidence. Assuming consumer demand keeps up with the number of iPhones shipped this year, analysts are estimating Apple will run out of iPhone 13 units by the end of the holiday season. However, the shortage of chips is “not a concern” since smartphones will be soon available in 2022.

Supply chain issues should not be a concern and the movement from the December to the March quarter shows strong demand. It will give anyone who didn’t receive the new iPhone for Christmas a chance to save up for the latest edition in the Spring of 2022. 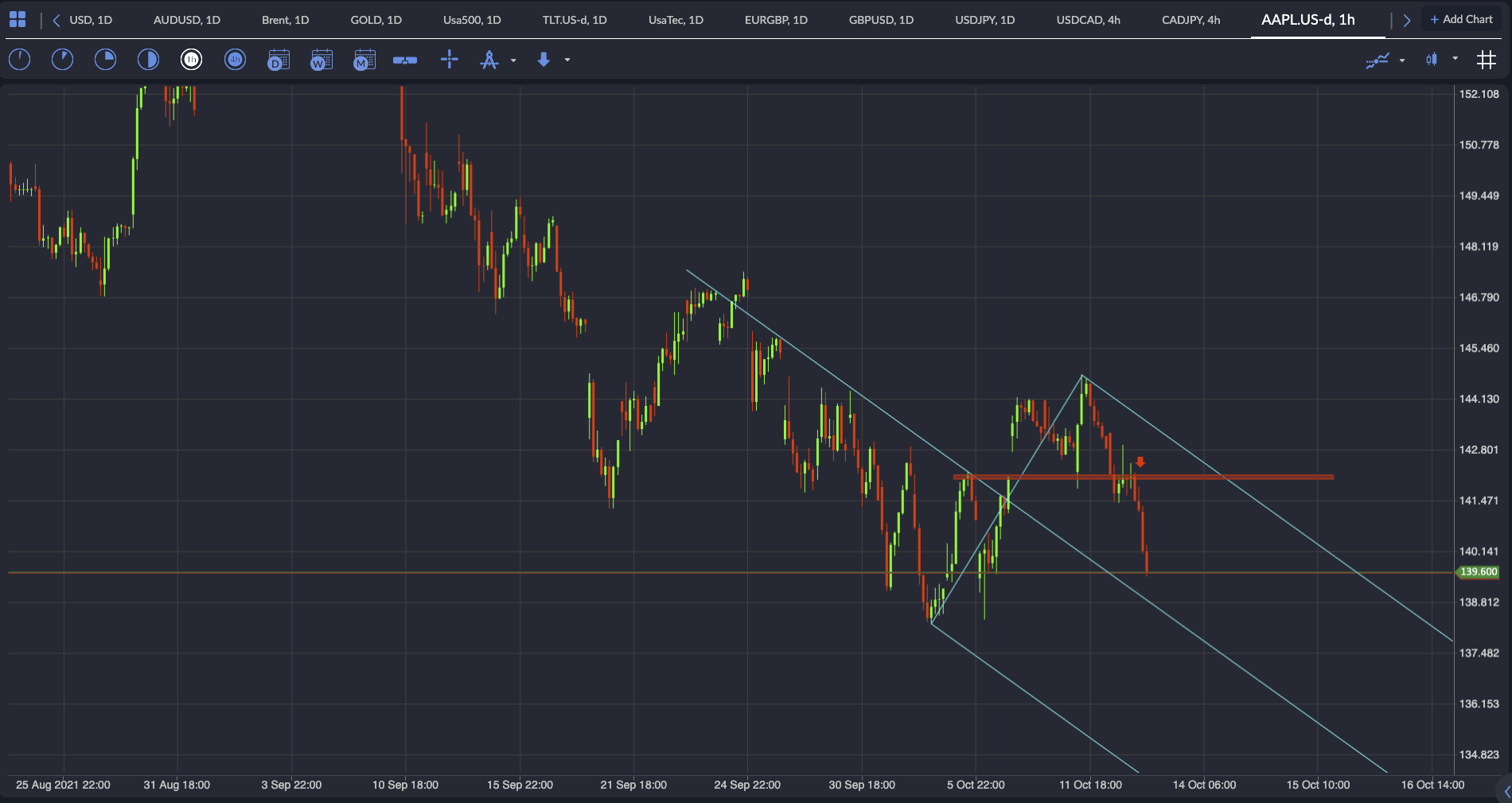 The Apple inc. chart is in a corrective pattern and any rally is currently being sold into. Today’s price action shows how support became resistance and the weak flows to the upside couldn’t maintain the opening prices. 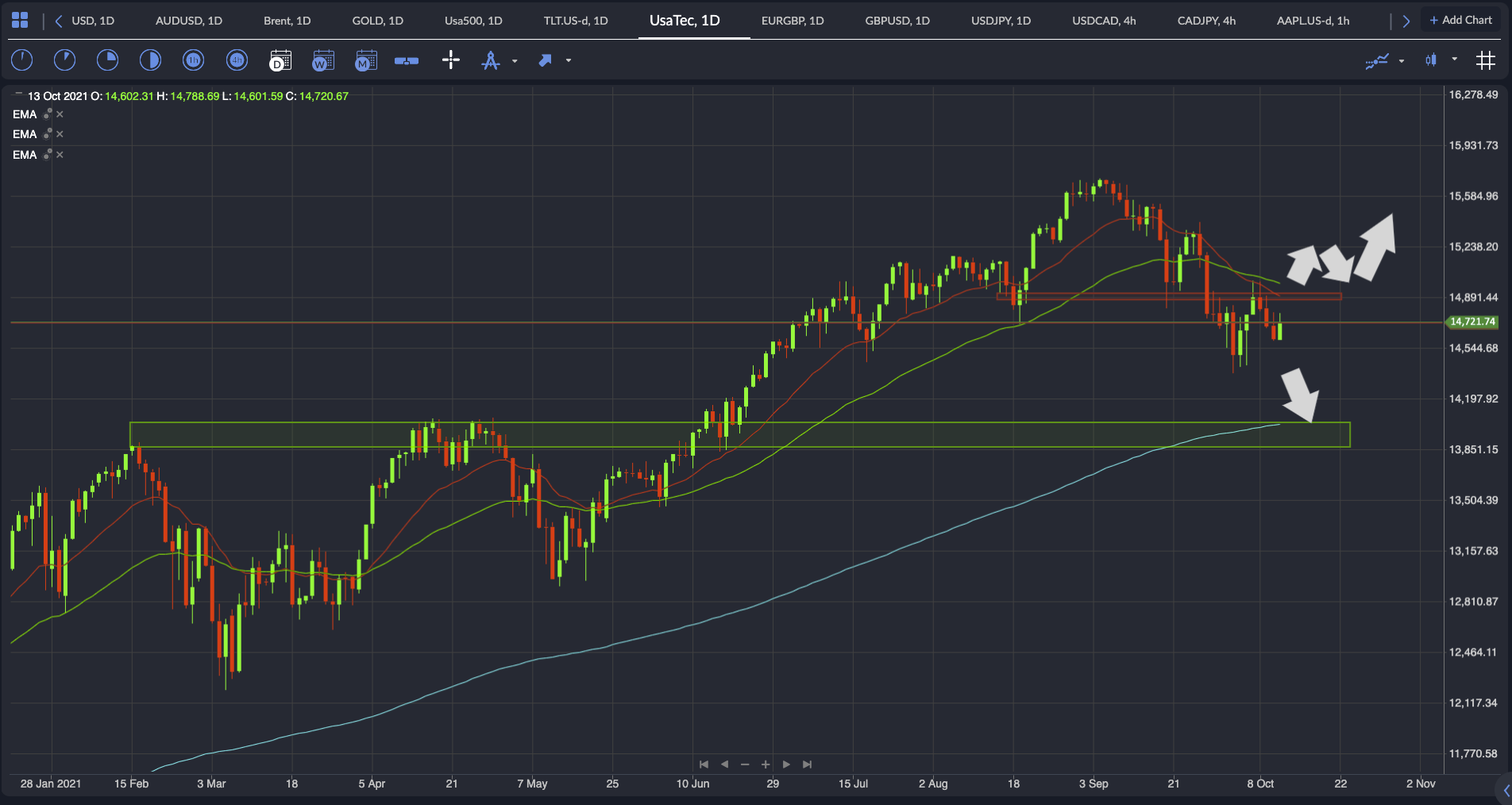 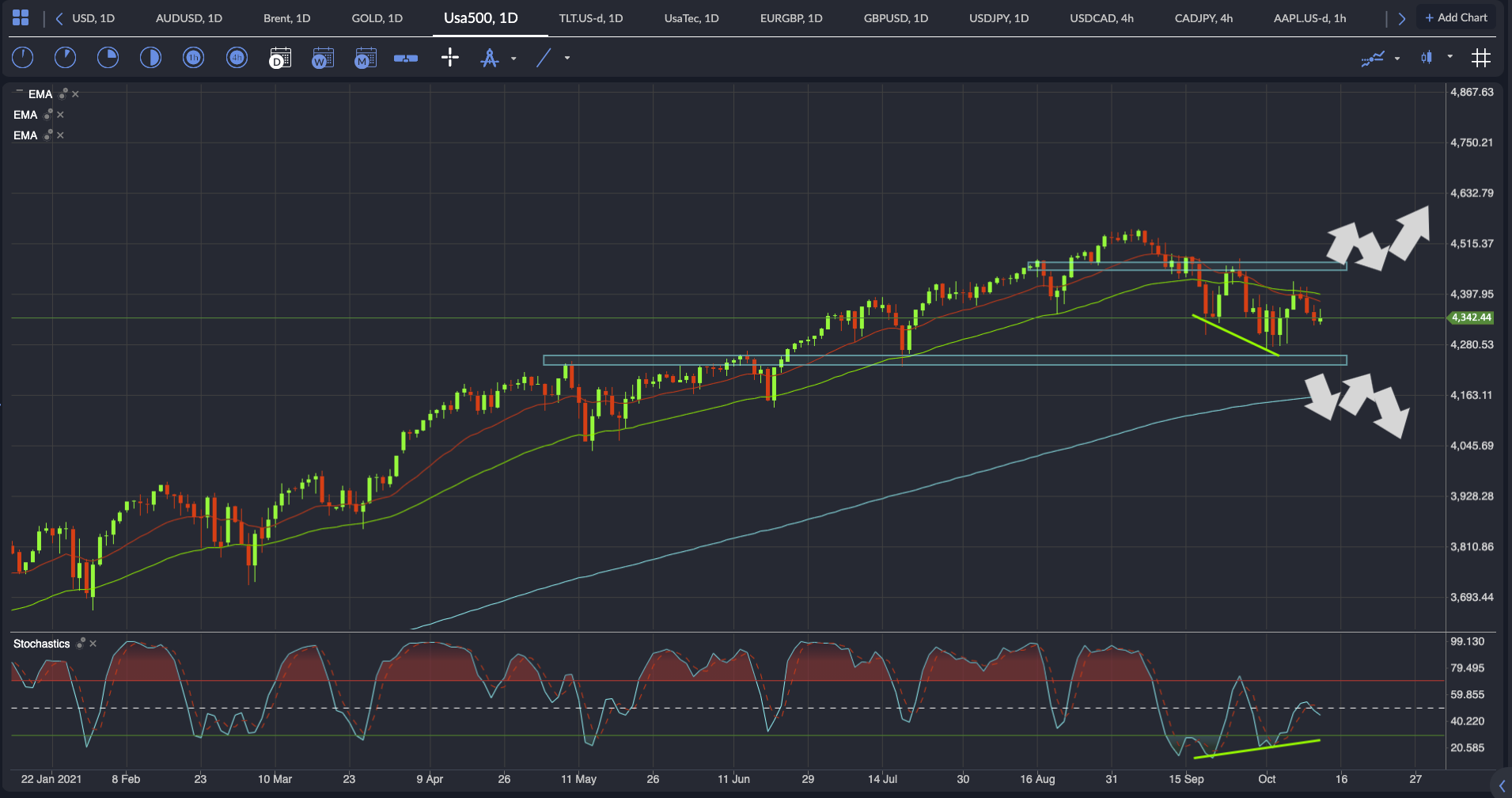 By market cap, Apple Inc. is a major component to the Nasdaq and S&P500, so when it is heading lower, it can sway the index too. Since Septembers failed defence of the daily 50-period moving averages anyone caught buying the dip has had their backside handed to them, or they have been caught up in a chop fest. It looks like the path of least resistance is to the downside with the daily 200 ema’s looking like a great target. On the S&P500 chart I have highlighted that the Stochastic indicator has some bullish divergence to the price action, so this could be an indication that the bears are not fully in control. But until we get a new market structure formation, where the bulls take out some swing highs and show old resistance acting as support, I would wait for prices to come down further into value.

The US fiscal flows have slowed down to pre-pandemic levels and a far cry from the March 2021 extreme spending, so there is a case that the economy is slowing down, as can be seen in the Atlanta Fed GDPNow models. A slowdown in the fiscal flows will be detrimental to the equities unless there is an uptick in bank lending which would lead to growth.

With the underlying macro conditions weakening, it makes sense to look for reasons to get short. Bad sentiment as portrayed by the news is one indicator. Reduced fiscal flows is another bearish signal. While the index is trading within the Initial Balance the probabilities of support and resistance holding are reduced. As soon as price moves out of the Initial Balance the probabilities of getting a follow through to TP go up to about 66%. 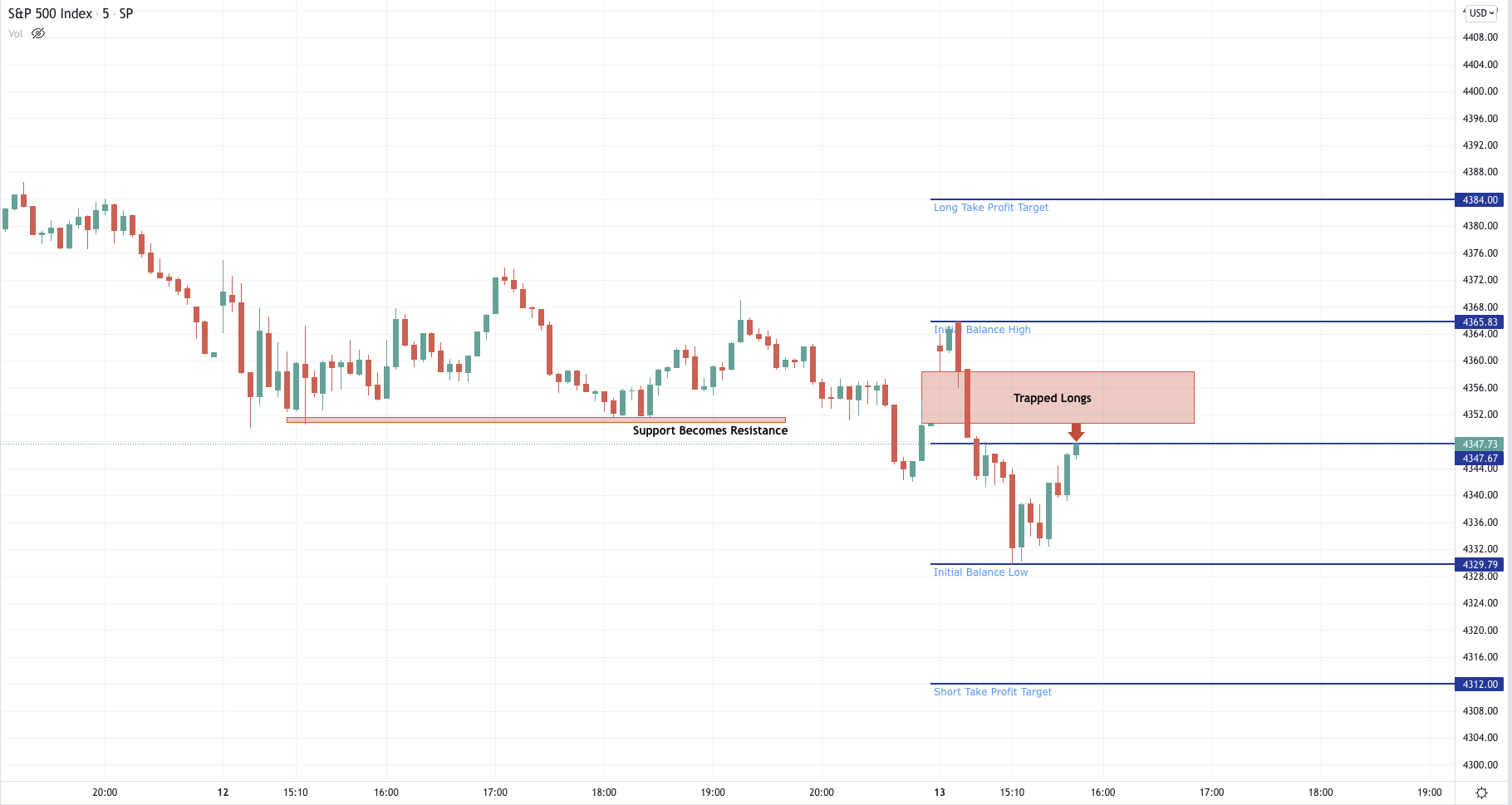 A third bearish indicator is seeing a gap up at the open on an index like the S&P500 which then quickly closes. This indicates that traders who were long on the open and possibly through the globex session are now caught long and will have to cover. Adding to an acceleration to the downside. 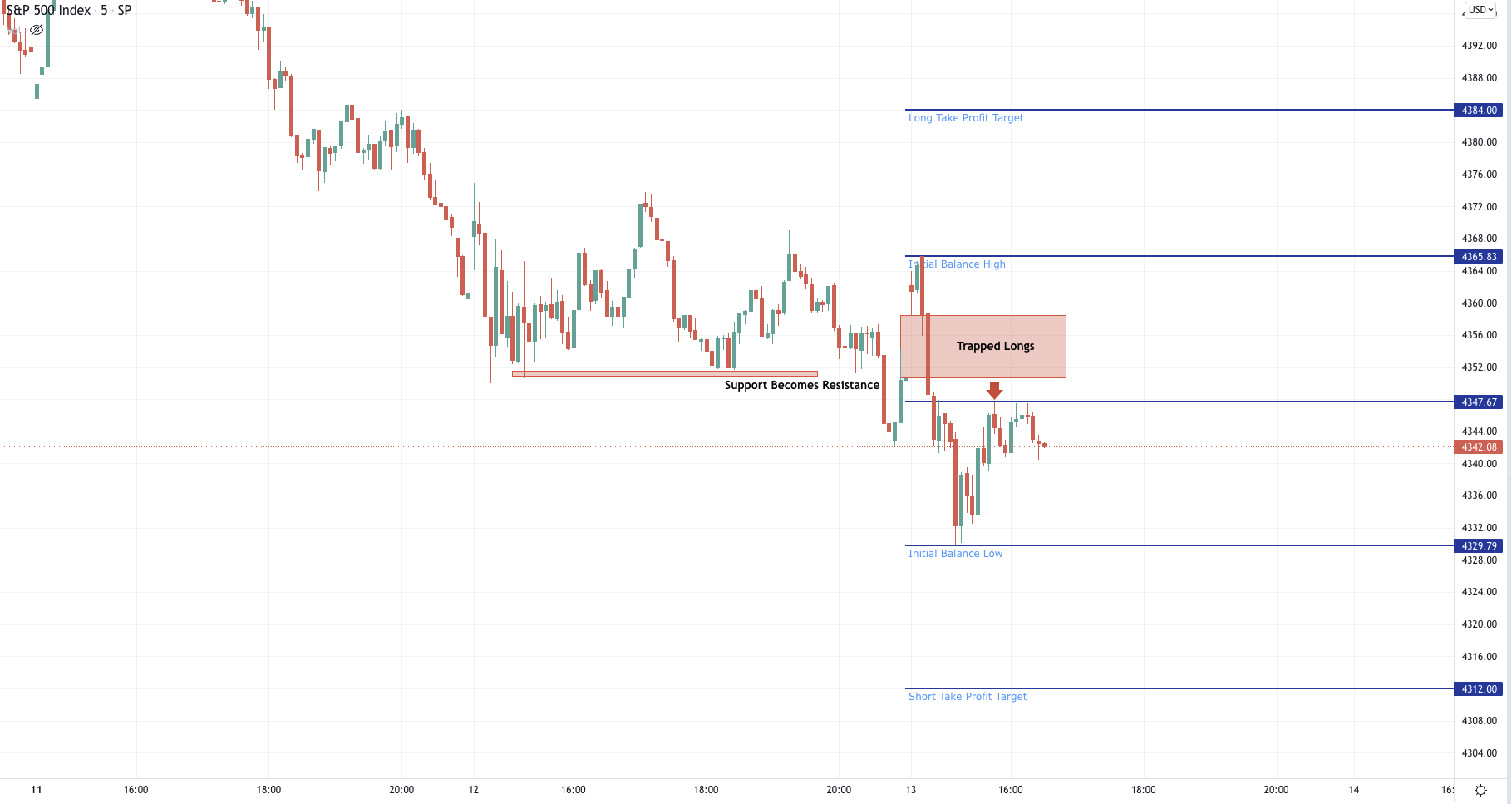 Using the first hour of trading to define the range and then all of the previous reasons mentioned to get short, an intraday trader will look for a high probability set up, with a decent risk to reward ratio. If you had taken the short at the 4347-price level on the chart above, the Stop Loss could have been as tight at the swing high on the 5-minute chart. With a Take Profit target down at 4312. This TP is 50% extension of the Initial Balance area.

To manage the risk you can either take partial profits when the price touches the IB low or start trailing the highs of the candles, giving yourself a bit of room to allow for bounces. 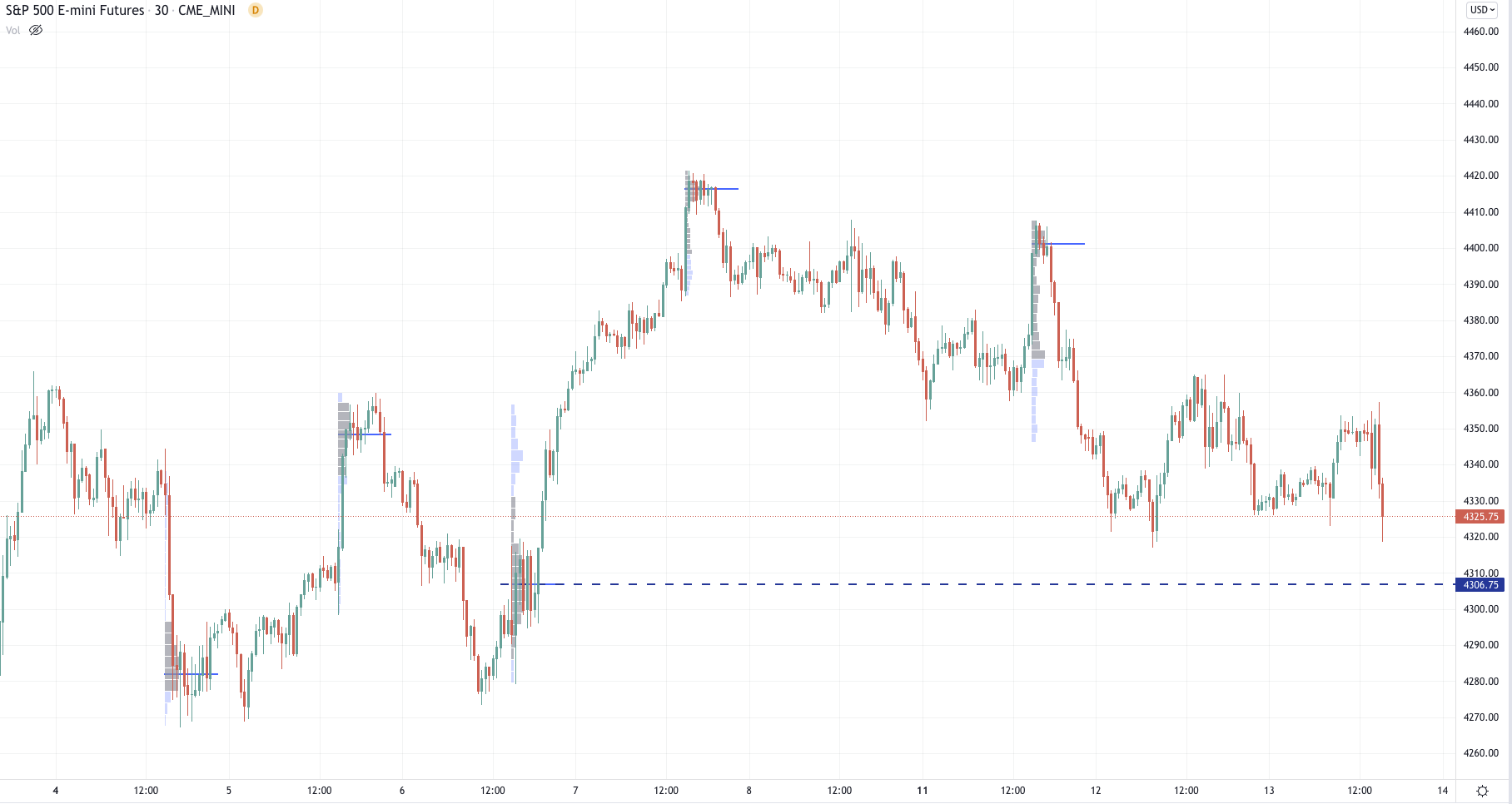 Another target to the downside would be an area where a high-volume node resides. These areas of balance or accumulation look like periods of correction on a chart before an impulsive move higher. I would fully expect there to be a reaction at the level marked on the chart should we visit there today. 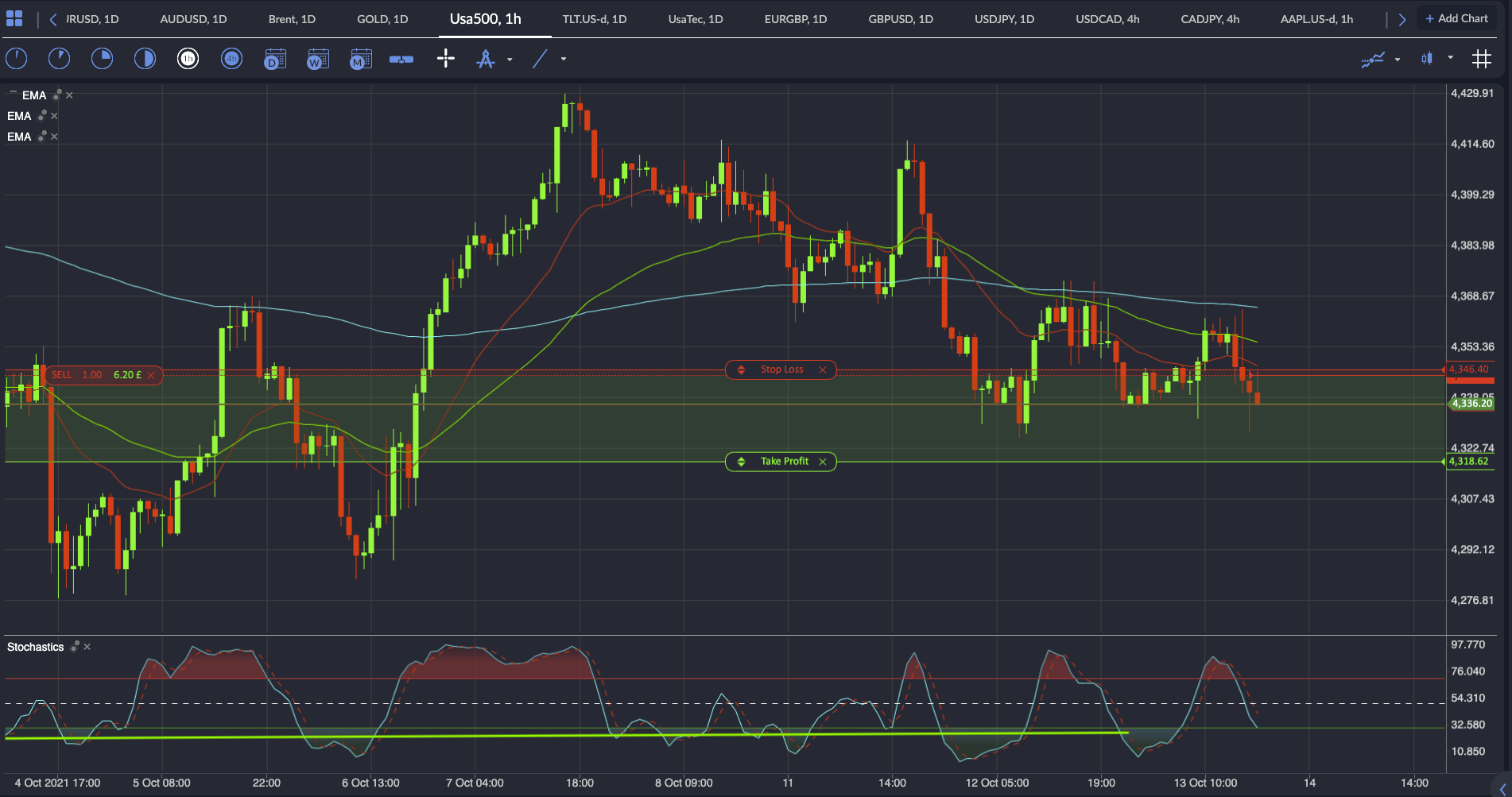 As an example of a trade idea, the chart above shows how I manage my risk to reward and with a high RRR you don’t have to get many trades correct to make some money in the medium to long term. If the price action turns due to a Tier-1 event like the FOMC meeting minutes release later today, the next level of old resistance above could become support and therefore you will have new information to question whether being short today is worth attempting from a higher level or whether to wait for another setup to occur following your original thesis. It soon becomes an If > Then statement meaning you will always be thinking ahead of time, planning your trade and trading your plan. 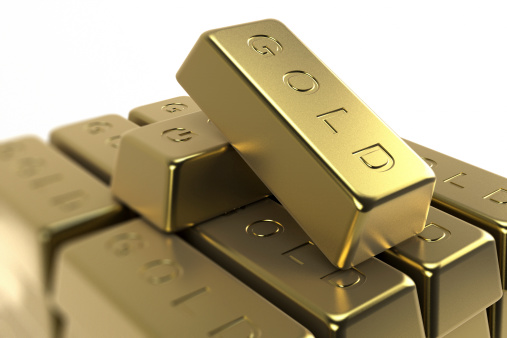