Apple Inc. drives market growth, but will it last? 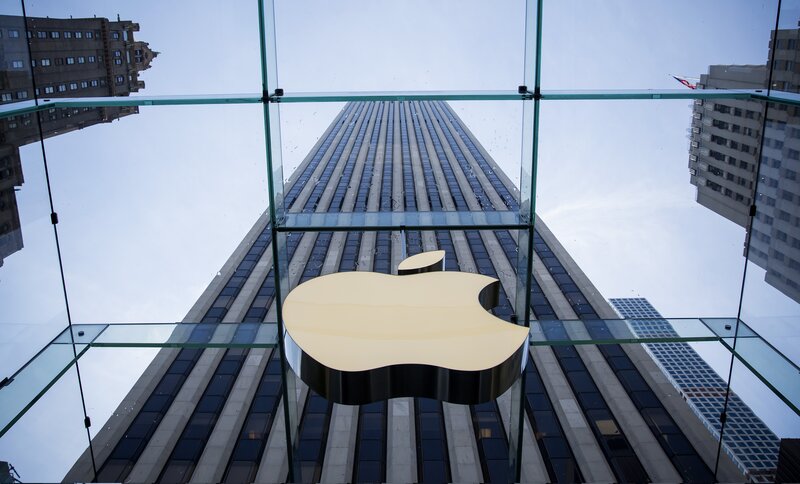 451
SHARES
12.5k
VIEWS
Share on FacebookShare on TwitterShare on WhatsApp 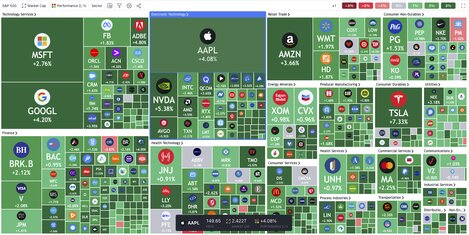 Apple Inc. (AAPL) extended its rally by +4.08% on Friday after investors recovered from a 10-month low following a weaker US PCE index reading. With the US dollar weakening, US stocks rose as hawkish expectations for Fed rate increases began to fade.

Although the next earnings and revenue report remains a crucial indicator of the AAPL stock’s direction in the short term, the financial position of AAPL has been strong. On April 28th, the company released its Q2 revenue growth, with earnings per share growing to 6.20 over the last twelve months (TTM). The P/E (TTM) currently stands at 23.37 and the companies market cap is a massive $2.422 trillion.

Apple is scheduled to report its next earnings and revenue report on the 2nd of August, and revenue is expected to drop to 82.63 billion from the previous 97.278 billion and earnings to 1.15 from 1.52 from the last report. This is due to several Apple’s Asian manufacturers having been affected by the Shanghai lockdown. Because of the supply chain disruption, there is a possibility of a delay in the release dates of the iPhone 14, which will be a major blow to the company’s revenues and earnings in Q3.

As traders weighed the impact of Fed monetary tightening against the backdrop of slow economic growth and consumer spending, the Apple stock soared to 149.64 while the benchmark US 10-year treasury yield fell by -0.29% on Friday. As a result of both the PCE price index and Michigan Consumer sentiment decreasing from 65.2 to 58.4 in May, the value of the dollar has been weakened.

In the wake of its regulatory crackdown and lockdown, China has lifted its ban on gaming licensing, giving tech giants a breather amid the global share price drops. Investors were also relieved by the Fed meeting minutes released last Wednesday, because they had been expecting a more hawkish tone against soaring inflation, supply chain disruptions, and intensifying geopolitical tensions. To curb 40-year high inflation in the US, FOMC members backed a 50bps rate hike in June and July but didn’t go on to say there would be further rate hike increases of that magnitude beyond. In the short-term, this may further exacerbate selling pressure in the indices as the Fed try to cool the economy with control over the demand-side as they have no control over the supply-side. But the reality has been the high-quality stocks have fared well during the higher inflationary periods.

Traders should watch out for the release of US employment data as we get into the end of this new week. If nothing else this is a high volatility event and if we get rising wages, this may encourage the Fed to go harder for longer. 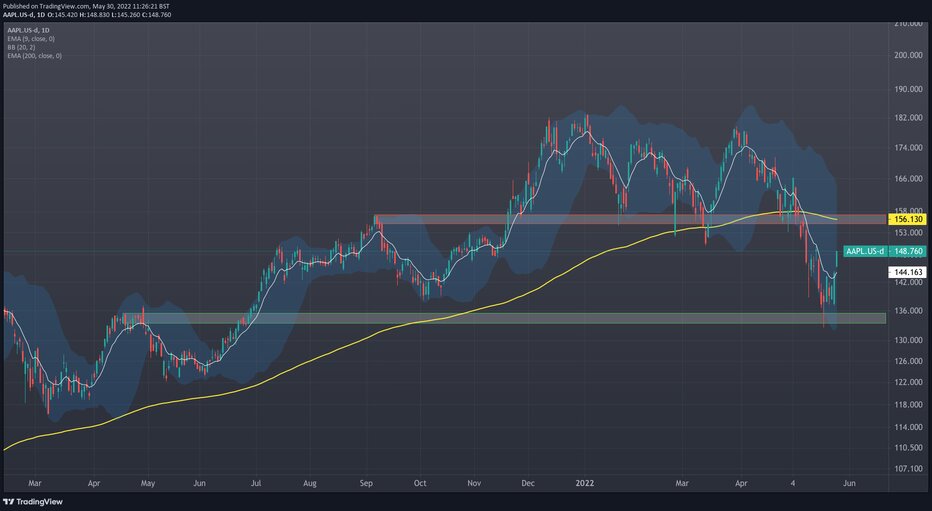 The APPLE stock rallied towards the 150.00 area as bulls managed to defend the 138.00, 10-months low. Price closed at 149.64 and a break above the immediate high may renew bullish interests toward the 163.88 level. The current pivot coincides with a 200=period EMA and holding above that area may open room for further gains to the upside. 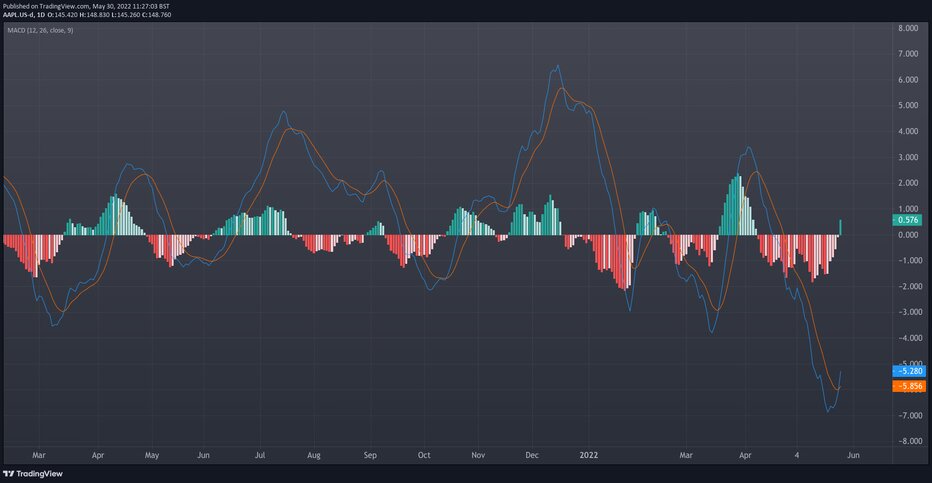 The MACD indicator shows that the Apple Stock is oversold and the possibility for a strong correction to the upside if the price breaches the 150.00 near term resistance. Volume bars reading is above the 0.000 neutral level and a moving average cross over into that positive territory will reinforce bullish strength in the near term.

However, a failure to break above the 150.00 near term barrier may renew selling pressure towards the 138. Support and 125.00 level subsequently. 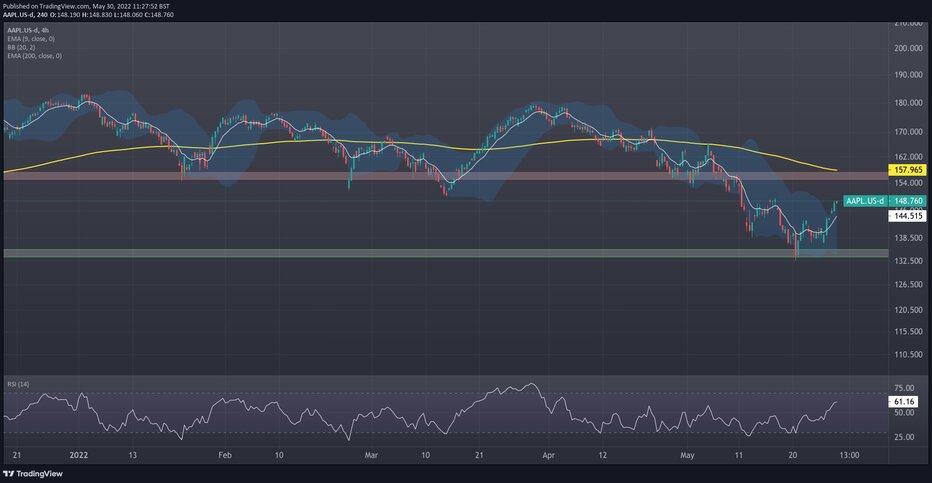 Although upside movement is capped by the 150.00 and 163.88 barriers, the Apple stock has recovered modest gains. The stock is technically bearish in the near term and critical areas to look out for are the 163.88 resistance and 138.68 support. A break above the swing high printed on the 17th of May would see bulls targeting the 158.00 resistance, which is confluent with the 200-period moving average.

The RSI indicator reading is trading above 50, showing bullish momentum in the near term. However, bulls need to challenge the current barriers to reclaim a bullish outlook. A failure to break above that area around 160.00 may see bears seeking the 130.00 and 125.00 psychological levels. 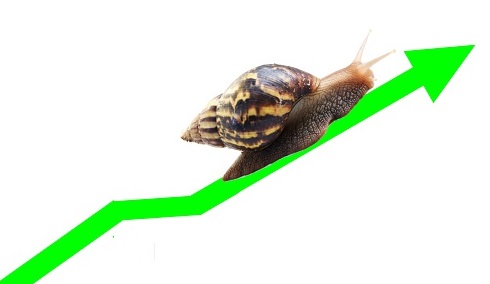