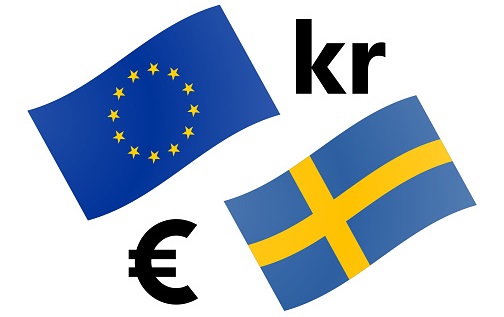 426
SHARES
9.6k
VIEWS
Share on FacebookShare on TwitterShare on WhatsApp

As market analysts had widely predicted, the Riksbank kept its interest rate at 0.00% this morning. Their press release read very much like statements from other central banks, as economic activity has been strong, and inflation has risen rapidly, mostly because of rising energy prices.

Both the Riksbank and the Fed predict a fall in inflation next year. Although unlike the Fed, which is tapering their purchases, the Riksbank board forecasts that their holdings will be roughly unchanged in 2022, after which they will gradually decline. As a result of this monetary policy, inflation in their view is expected to be on target in the future. 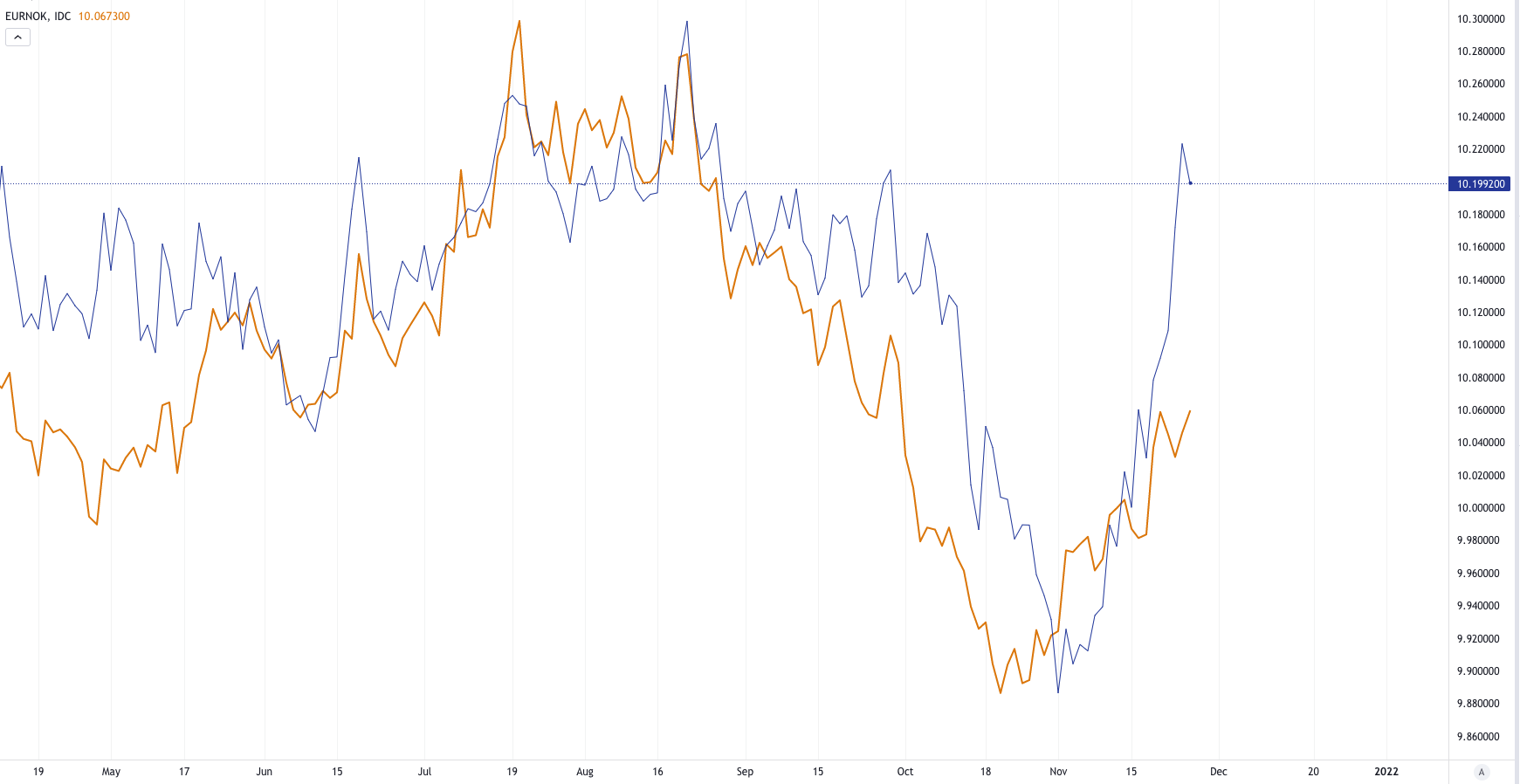 Along with the Norwegian krone, the Swedish krona has been the worst performing G10 currency this month and against the euro the Swedish krona has fallen by 2.1%. This month may close in a very positive fashion and could potentially be the bottoming pattern EURSEK traders have been waiting for. If the EURSEK trade works out to the upside, the EURNOK could follow and yield better returns.

Concerns over the latest COVID wave, the energy price shock, the continuing real estate slowdown in China and ongoing political tension with Russia continue to undermine investor sentiment towards the krona and other European currencies. Though on the upside Sweden’s current COVID situation is not as bad as last year as they manage to keep infection rates relatively low. 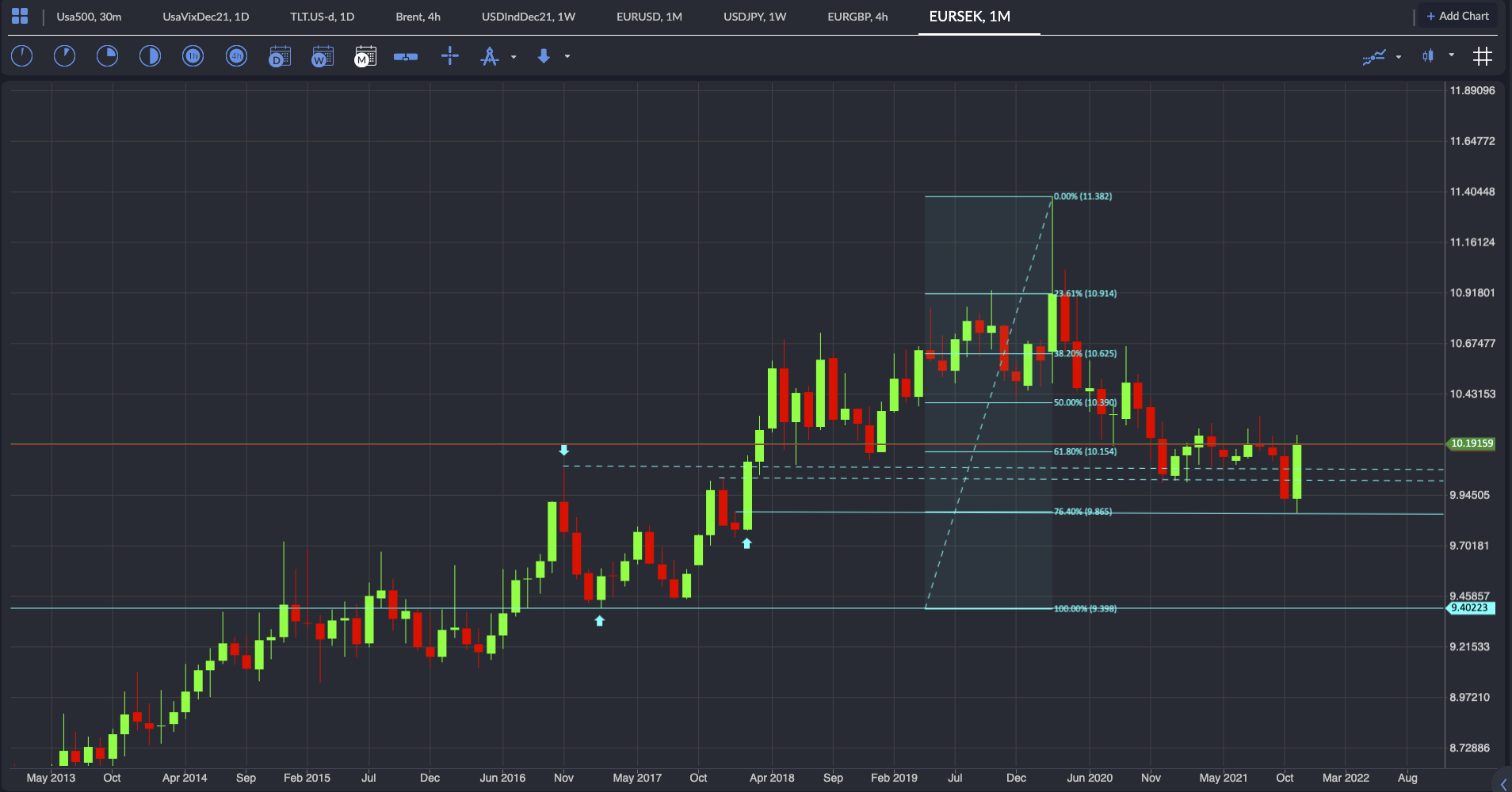 January 2018 marked a down month for the EURSEK, but those traders were the last to short before prices broke higher out of the 2016-2018 trading range. From then on, the EURSEK grinded higher to 11.380. Coming back to present times, the EURSEK’s decline stopped at a retest of that January 2018 demand zone and if the month was to close today at these prices, we would have a very bullish looking monthly reversal candle. In terms of confluence, the deep retrace from the 2020 highs to the 2016-2018 trading range lows also marketed a buying level. The 3 major moving averages are also in play. The 200-period moving average is below and still sloping upward, showing longer term bullishness. While the 20 & 50-period averages on this monthly chart have converged are currently acting as dynamic resistance. 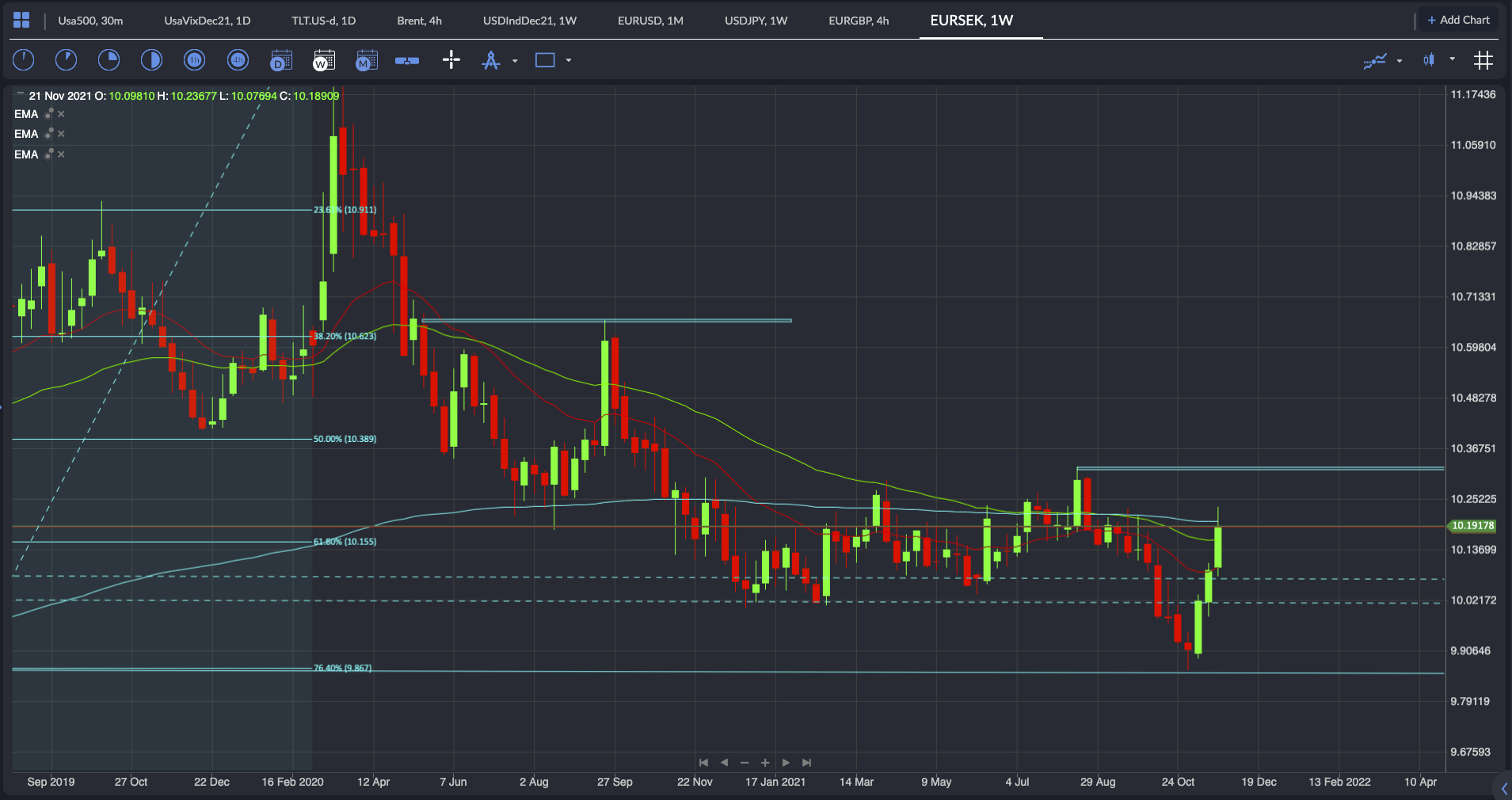 Looking at the weekly EURSEK chart and I have highlighted the August 2021 swing high as being the key level, for which the bulls need to breach for the trend to have made a new high. At which point we either get an aggressive breakout to 10.650 or we get a pull back to value around 10.050-10.100.

The retail trader sentiment is showing 65% of traders on the ActivTrader platform are shorting still, so if their stops are above that August 2021 swing high, we could see them flip after being squeezed out. The weekly 200-period moving average is currently holding prices back from any further progression and there is likely to be some sellers left from the August 2021 period who will want to defend these levels. When I see this, I sometimes feel it would be better to wait for the 20 & 50-period moving average to cross over the 200 averages as that usually signals the trend following traders are stepping in. After such a long period of down moves, this bounce off the lows will be short sellers closing out their positions rather than bulls stepping in. Which is why I would like to see a breach of the August swing high or some higher swing lows printed. 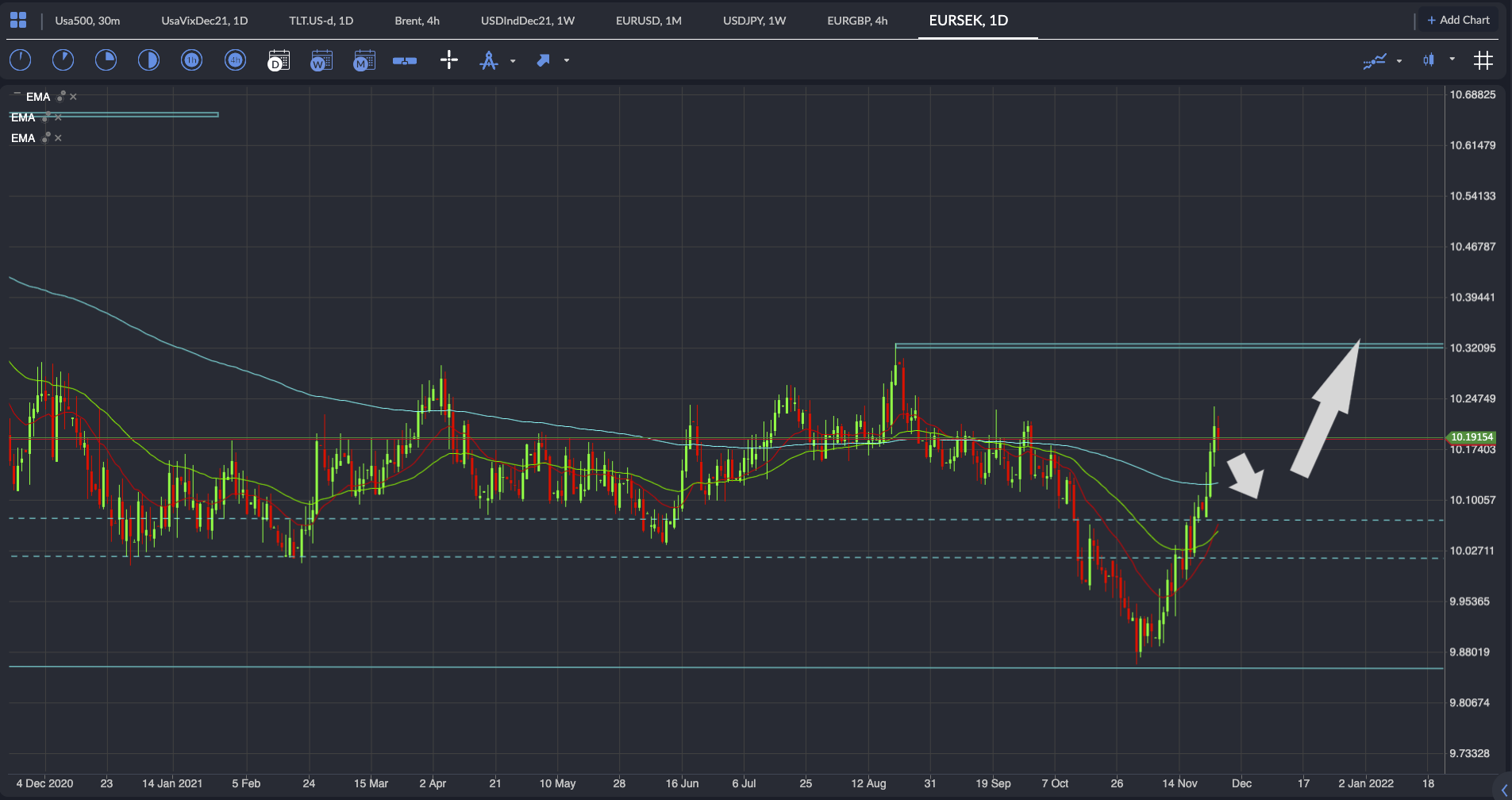 On the daily chart the last few days of trading have been making new highs, so after the ECB meeting minutes and President Lagarde’s speech, it will be interesting to see if the euro can appreciate above yesterday’s high, or whether the market pulls back to the daily 200 EMA. If we take out yesterday’s high, I foresee a straight move up to the 10.325 level, otherwise we will look to the 10.100-10.0500 zone for support. 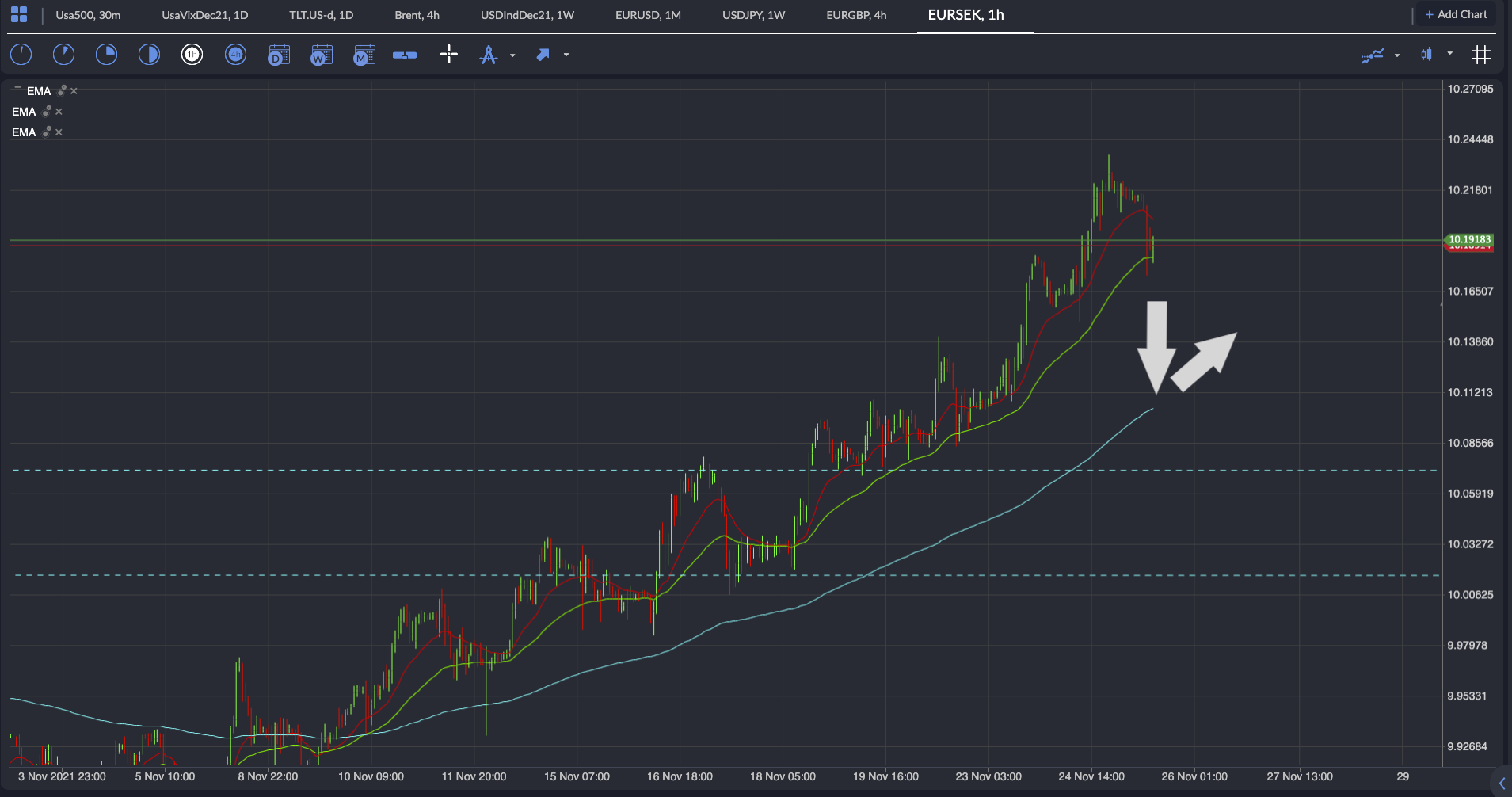 The hourly chart suggests that the 20 & 50-period averages are doing their best to keep prices moving higher, with the 50 EMA acting as good dynamic support. The hourly 200 EMA was tested on the 12th of November and was quickly rejected, so any down move today or tomorrow, which results in a rejection of the 200-period moving average on the H1 chart would be a very strong buying signal. 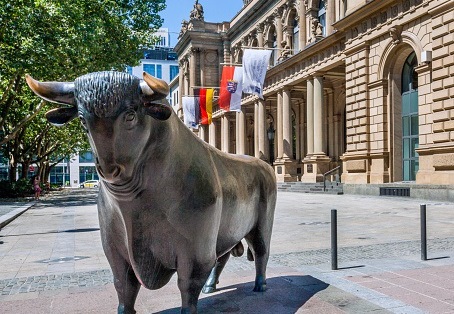